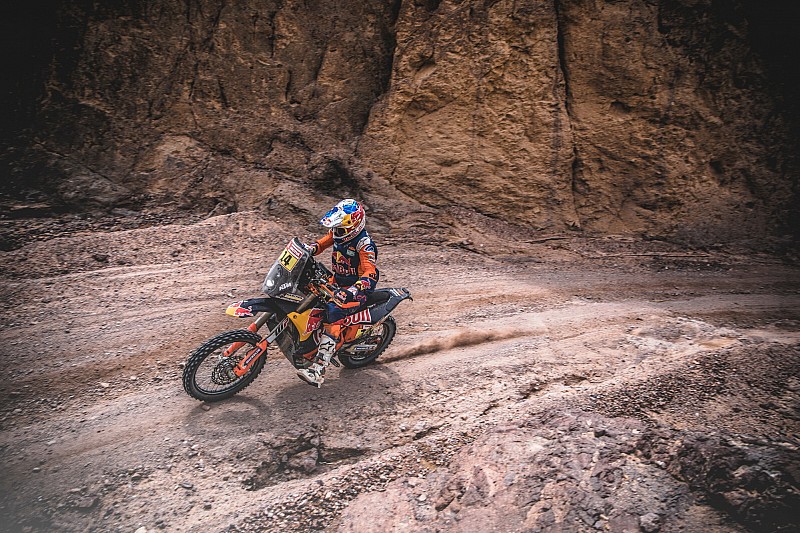 Sam Sunderland bounced back from a difficult Sunday to top Stage 7 of the Dakar Rally and take second overall behind Ricky Brabec, who retook the bikes class lead.

KTM rider Sunderland struggled with his rear brake in Stage 6 and was 23 minutes off the pace, but the 2017 champion dominated proceedings in the subsequent 331 timed kilometres of Monday's route, which both started and ended at San Juan de Marcona.

Honda man Brabec led in the early stages of the test - which was delayed and then suspended due to fog - but Sunderland took over at the third of six waypoints.

Chilean rider Jose Ignacio Cornejo (Honda) managed to stay close to Sunderland, finishing only 1m51s behind, but none of the title contenders were able to keep up with the Briton.

Brabec was best of the rest in third and the American reclaimed the lead from Pablo Quintanilla, the Husqvarna rider struggling throughout the day.

Price and Matthias Walkner were more or less on par with Sunderland until WP4 but then lost a big chunk of time, the duo finishing 12 and 16 behind their pace-setting teammate.

Kevin Benavides and Quintanilla were the biggest losers of the day as they surrendered 19 and 21 minutes respectively, dropping to fifth and sixth overall.

Price stepped up as Brabec's main rival with a gap of 6m55s, the Australian now closely followed by van Beveren.

Sunderland moved up to fourth while Walkner is only seventh, a single second behind Benavides.

Nicolas Cavigliasso took his fourth consecutive and sixth overall stage win in the quad class, and now leads by 1h15m36s.

Cavigliasso was battling for the lead with Alexandre Giroud in the first half of the stage before he pulled away, and won by 4m10s.

But the Frenchman, fourth overall, was only four minutes faster than them, unable to significantly change his nearly two-hour deficit to third place.

Gonzalez and Gallego continue to hold second and third overall, separated by 23 minutes.