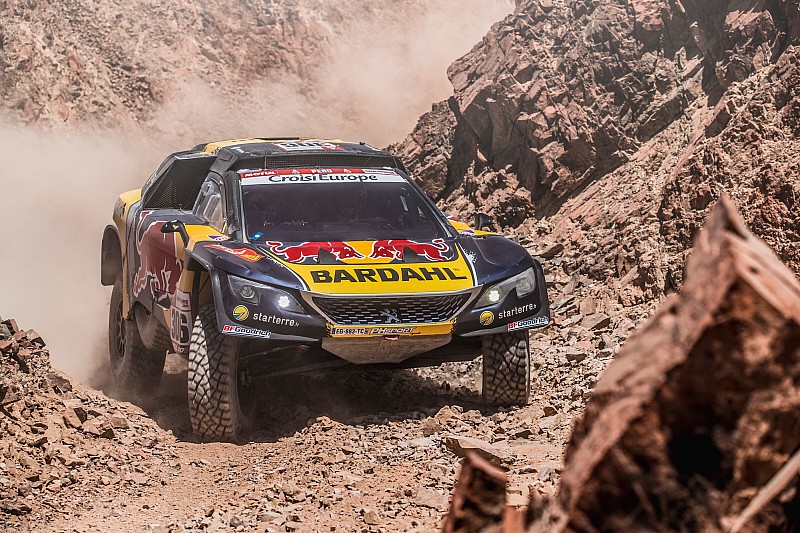 Sebastien Loeb scored his fourth stage win of the 2019 Dakar Rally on Tuesday, as Nasser Al-Attiyah stretched his lead in the overall standings to 46 minutes.

PH Sport Peugeot driver Loeb began the eighth stage of the event over two hours later than his main rivals, as Dakar organisers opted to group together the top 10 in the cars running order with the top 10 bikes and top five trucks.

After dropping three minutes to Al-Attiyah in the opening portion of the 361km San Juan de Marcona-Pisco test, Loeb seized the advantage in the latter part of the stage, claiming his 14th career Dakar stage win by 7m27s.

But Toyota man Al-Attiyah still came away with an enhanced lead, as his nearest rival in the overall classification, Stephane Peterhansel, hit yet more trouble.

After Peterhansel won Monday's seventh stage, the X-raid Mini driver's quest for a 14th Dakar title took another severe blow as he dropped 24 minutes to Al-Attiyah as a result of getting stuck in the dunes twice.

As a result, Nani Roma is now X-raid's best-placed driver in the overall classification, 46m29s behind Al-Attiyah with only two stages left to run.

Loeb's pace has enabled him to get within 16 seconds of Roma for second overall by the end of the day, while Peterhansel now sits seven minutes outside of a podium place.

The two remaining Mini Buggy drivers - Cyril Despres and Carlos Sainz - both endured a disastrous stage as they got stuck in the sand early on.

Despres gave away 55 minutes to Al-Attiyah as a result but the Frenchman remains a distant fifth overall, narrowly ahead of X-raid's Kuba Przygonski, who was third on the day.

Sainz lost almost an hour and a half but still gained a place overall, rising to ninth, as Toyota's Bernhard ten Brinke was forced out of the event with engine and gearbox woes.

Giniel de Villiers is now also back in the top 10 overall, seven hours down on the lead.

There was a change of lead in the trucks division, as Dmitry Sotnikov took over at the head of the overall classification from Kamaz stablemate Eduard Nikolaev with his first stage win of the rally.

After getting stuck in the same dunes that caused problems for Despres and Sainz, Nikolaev conceded almost exactly an hour to Sotnikov, who now holds an advantage of 26m49s with two stages left.

Chaleco Lopez racked up his third stage win on the trot in the SxS class, and took the lead overall as Reinaldo Varela got stuck and dropped almost 90 minutes.

Rodrigo Moreno is now Lopez's closest challenger, albeit 54 minutes down, followed by Gerard Farres and Varela.