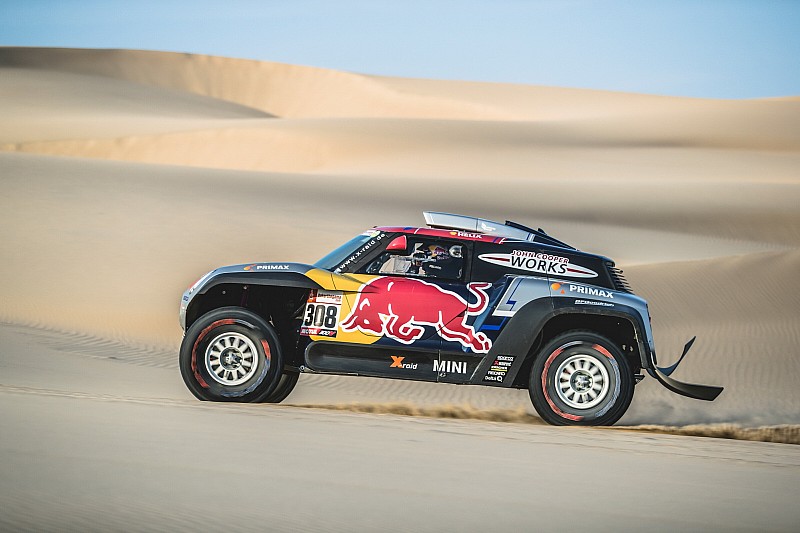 Stephane Peterhansel secured his first stage win of the 2019 Dakar Rally on Wednesday, while the victory hopes of his X-raid Mini teammate Carlos Sainz were practically dashed.

After crossing the second waypoint tied with Toyota's Nasser Al-Attiyah, Peterhansel steadily pulled clear of the pack over the remainder of the stage, ultimately winning by 3m26s over his Qatari rival.

As a result, he climbed from 13th place in the overall standings to third overall.

It had been another Toyota driver, Giniel de Villers, that led after Tuesday's stage, but the South African stopped 172km into the stage and had yet to finish at the time of publishing.

Al-Attiyah now leads overall by 6m48s over the best of the X-raid Mini entries, the 4x4 of Yazeed Al-Rajhi, who was fourth on the stage behind another 4x4 user, Kuba Przygonski.

Stage 2 winner Sebastien Loeb endured a much tougher time opening the road in his PH Sport-run Peugeot, dropping 42 minutes to countryman Peterhansel and tumbling to eighth overall, 38 minutes off the pace.

But the worst drama of the day befell X-raid Mini's Sainz, whose hopes of defending his 2018 title evaporated when he broke his buggy's front-left suspension just 39km into the stage, almost losing a wheel.

The Spaniard was stopped for 3 hours and 15 minutes, and is set to drop a long way down the leaderboard.

Cyrill Despres, the other Mini buggy driver, lies sixth overall, followed by Toyota's Bernhard ten Brinke, who conceded more than half an hour to the leaders having started the day second behind de Villiers.

UPDATE: De Villiers finally completed the stage having lost 4h30m to the leaders, and is now 40th overall, four places behind Sainz - who finally lost 4h20m on the stage and is now 36th.

Eduard Nikolaev continues to lead the trucks category, but it was one of his Kamaz stablemates that won the day's stage, with Andrey Karginov beating Iveco rival Federico Villagra by 11 minutes on Wednesday.

Nikolaev was only fourth on the stage behind another Kamaz driver, Dmitry Sotnikov, but nonetheless holds an advantage of 5m17s overall over Villagra. Sonitkov is third, 8m42s off the lead.

Iveco's Gerard de Rooy began the day second overall but suffered a dreadful stage, finishing 1h27m off the pace. The Dutch veteran has slipped to seventh overall and languishes 1h17m behind Nikolaev.

Lopez assumes the head of the overall standings by 3m24s from Farres, as previous leader Reinaldo Varela lost 15 minutes and slipped to fourth.