Sunderland “cried like a wimp” after clinching Dakar title 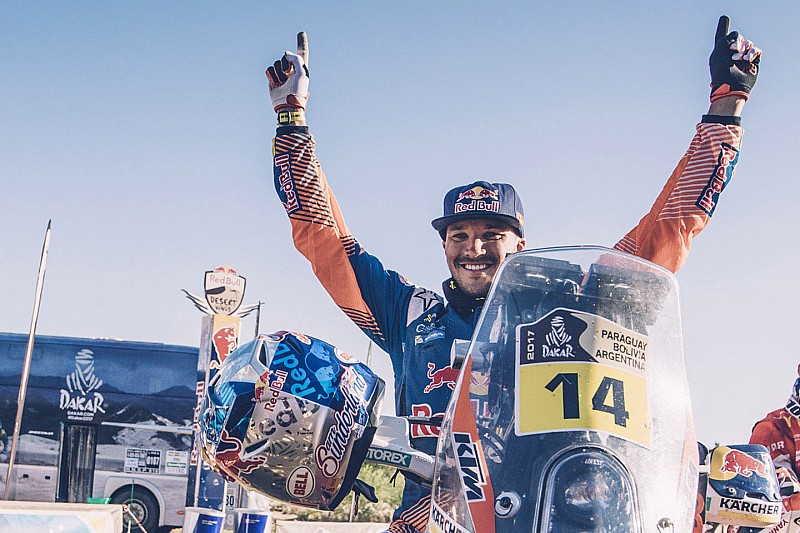 Dakar Rally bikes champion Sam Sunderland has admitted he “cried like a wimp” after claiming his maiden triumph in the South American event.

Having failed to finish on any of his three previous Dakar attempts, Sunderland beat KTM teammate Matthias Walkner by 32 minutes to become the first British winner in any category of the rally’s history.

He took the lead of the rally on the fifth stage, and maintained it to the end - helped by some of his nearest challengers falling by the wayside.

“It’s been difficult. The last six days leading have been a lot of pressure. I was overwhelmed by emotions [when I crossed the line]. I couldn’t control myself and I started to cry like a wimp.

“To finish the first ever one, and to win, it’s a dream come true. I hope I get some interest from the [British] public and the media, because this race is massive – it’s a huge adventure and one of the toughest races in the world."

Asked by Motorsport.com if he ever felt winning the title was possible before the rally, he said: “You can’t expect to win before you get through the first week. I had never finished the first week before.

“I tried to block out [the thought of winning]. Obviously it was there, but I told people I wasn’t thinking about it, just to try and convince myself.

“When you're on the bike for 14 hours a day, there are a lot of things that go through your head.”

Sunderland’s Dakar triumph marks the 16th in succession for KTM, the Dubai-based Briton becoming the second new winner since the era of Cyril Despres and Marc Coma domination that ended in 2015.

“Times have changed,” commented Sunderland when asked if he felt there had been a changing of the guard in the Dakar bikes class. ”There’s a lot of fast guys and it’s more open who can win.

“I think now it’s more the guy who makes least mistakes, rather than just the fastest guy [who wins]."