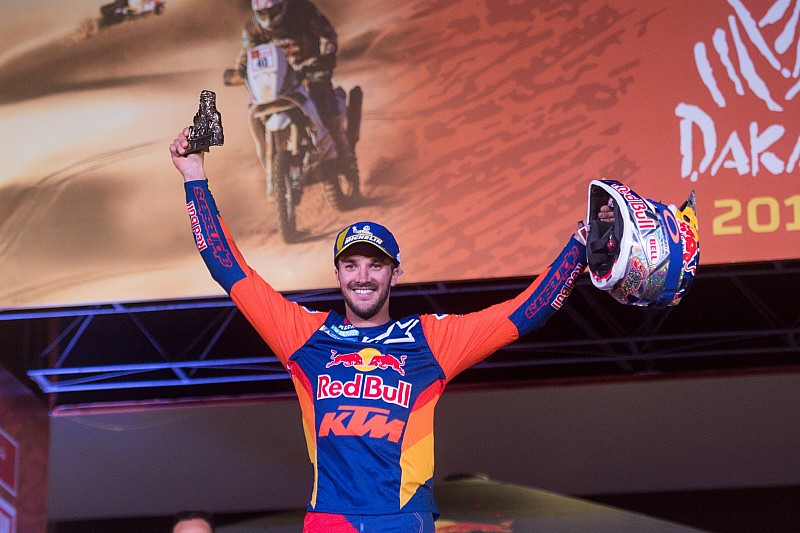 KTM rider Sam Sunderland inherited third place in the 2019 Dakar Rally's bikes classification after his one-hour penalty he received earlier in the event got revoked.

Sunderland was penalised after Stage 8 for modifying his Iritrack monitoring system to get a more advantageous road position, and was consequently ruled out of contention for the title.

He ended the rally eighth as a result, but after the finish, stewards received a test result which showed the Briton did not break the rules, and the penalty was withdrawn.

Sunderland moved up to third as a result, aided by a crash for Husqvarna's Pablo Quintanilla on the final day, the Chilean now dropping down to fourth despite being just one minute off the lead ahead of the last stage.

The change means that KTM ends the 2019 Dakar Rally with a 1-2-3, with Toby Price claiming a second title ahead of outgoing champion Matthias Walkner in second.

Sunderland's podium is his second in the Dakar following his 2017 title, the only other time he has finished the event.

Rival marque Honda, which is awaiting the outcome of a protest regarding Kevin Benavides' three-hour penalty, was unhappy with the decision. Benavides was given a penalty for carrying route notes.

"We are quite unhappy about how the Dakar went, especially in the final part of the race," said Raul Castells, Honda HRC team manager.

"We, as a team, have done the best we could and we have given everything. The race has ended without a deserved prize, but the team has worked hard and everything worked well.

"Unfortunately we are quite unhappy with the jury and the organisation of the race, first, because of the penalty they have imposed on us, which we have appealed.

"We are also unhappy with how they have applied the rules to the rest of the Dakar participants: it is not tolerable to penalise one for something that could be done, and instead to others who have acted deliberately with the intention of doing something they knew that is not right, do not penalise them.

"Let's hope that everything is studied and the ways of how to make and apply the rules are changed."

With Joan Barreda and Paulo Goncalves both dropping out in the first week and Ricky Brabec later suffering an engine failure while leading, Jose Ignacio Cornejo ended up as the top Honda rider in seventh.