The marathon stages will definitely remind competitors of this basic rule of off-road races.

The only way to complete the Dakar is through a combination of endurance and determination. The competitors will have an additional problem to resolve on the 9,000 kilometres to be covered in Argentina, Chile and Bolivia: adopting and maintaining the right momentum, while the route continuously endeavours to break it.

Depending on the day, both the setting and the pace will change, moving from rocky routes to desert dunes and from endurance stages to extreme sprints. Given the competitors’ inability to recognize clearly identifi ed sections, in particular they must capitalise upon their ability to adapt… and to control their stamina. The marathon stages will definitely remind them of this basic rule of off-road races.

The Dakar tests competitors and their vehicles in extreme endurance. The marathon stages, where drivers cannot use their assistance teams, are a particular test of their ability to independently manage their mechanics. This year, cars and trucks, which have not taken part in a marathon stage since 2005, will have to tackle this additional difficulty.

Split over two days, a marathon stage involves some of the competitors spending the night in an isolated bivouac. The vehicles are taken into a closed area, where only help between competitors is authorised. Despite the technical challenge which this constraint represents, the drivers also enjoy a different, highly convivial atmosphere. In Uyuni, it will be the car teams which will spend a night apart, followed by the motorcyclists and quad bikers the next day. The truck category will have its own dedicated bivouac in the middle of the Atacama Desert.

To make organisation of the marathon stages possible, a new system has been set up at the heart of the extended stay in Iquique. So, on 11th January, three races will take place on three different routes and in two countries. This meant there was also a need to incorporate staggered rest days for the motorcyclists and quad bikers.

For several years now, the organisers have used their in-depth knowledge of the South American terrain to refi ne the routes and off er specifi c features for each category. For the 2015 edition, the motorcyclists and quad bikers will face an additional diffi culty, with a particularly dense second week: four marathon days in total. 35% of the kilometres they cover without the cars and trucks will be in the form of special stages.

Different routes and rest days also gives the car teams the opportunity to fully demonstrate their potential, both in terms of driving and navigation. With 1,382km of open space (a third of the special stages) the cars will be able to compete without being slowed down by overtaking... and will also enjoy routes on virgin terrain. The truck drivers will find themselves in this situation for more than 600km. 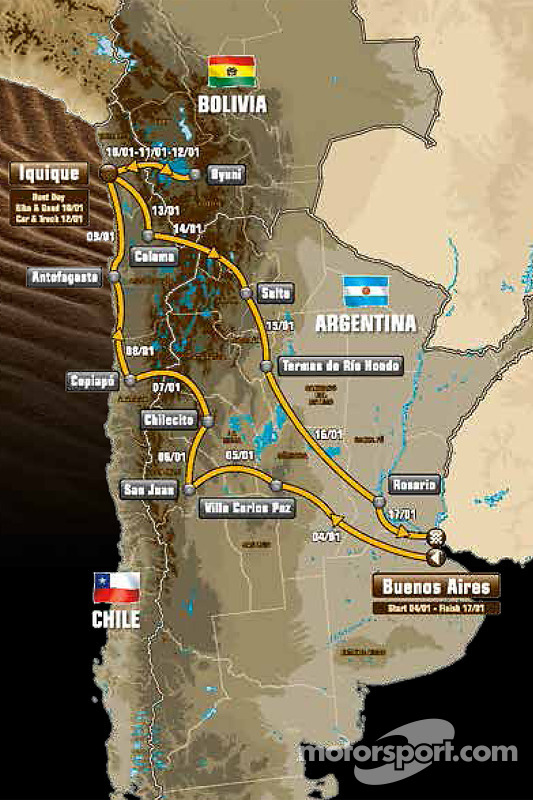 The route, taking competitors through Argentina, Bolivia and Chile

Buenos Aires — Nearly fifteen million people live in Greater Buenos Aires, which has emerged as an economic and cultural hub of South America. The striking diversity of its neighbourhoods, from the modernity of Puerto Madero to the faded charm of Palermo and the bustling quarters of La Boca and San Telmo, thrills even the most widely travelled visitors.

For the Dakar, however, the Argentine capital represents much more than a tourist destination. It is, above all, here that it all began (again)! After the 2008 edition was cancelled, the rally needed to bounce back and Porteños welcomed drivers from Europe, Africa and Asia with the same enthusiasm as it reserved for its own countrymen.

For everyone, the memories of the crowds gathered on the Avenue 9 de Julio, at the foot of the Obelisk, symbolised the start of a new era. From that night onwards, the Dakar felt welcomed with a passion. Even once the 2009 honeymoon period was over, demonstrations of mutual appreciation continued between the rally drivers and their hosts in Buenos Aires, which became the setting for the start and finish of the first three South American editions. After a four year absence, the return to the city is set to be explosive.

Iquique — As a rule, people visit Iquique as a stopping off point in their visit to the desert in Atacama. With its beguiling seafront, beaches and internationally renowned port, it marks for many the return to a less wild and silent environment. For the Dakar competitors, however, the town’s name gives them another feeling entirely and sends shivers down their spines.

The rally has been based here since 2010, when it set up its bivouac at the foot of a steep descent which makes the site one of the prime spots of off-road rallies. Hurtling down this huge slope, which features a 30% gradient over nearly two kilometres, the drivers experience both fear and wonder, blown away by the view over the Pacific Ocean.

The unique geography and visual environment leaves the finishers with an enduring feeling of relief. This will provide the ideal setting for the organisation of two rest days that will be located in Iquique for the first time.

Peterhansel: “I’ve never gone this quickly at a test!”