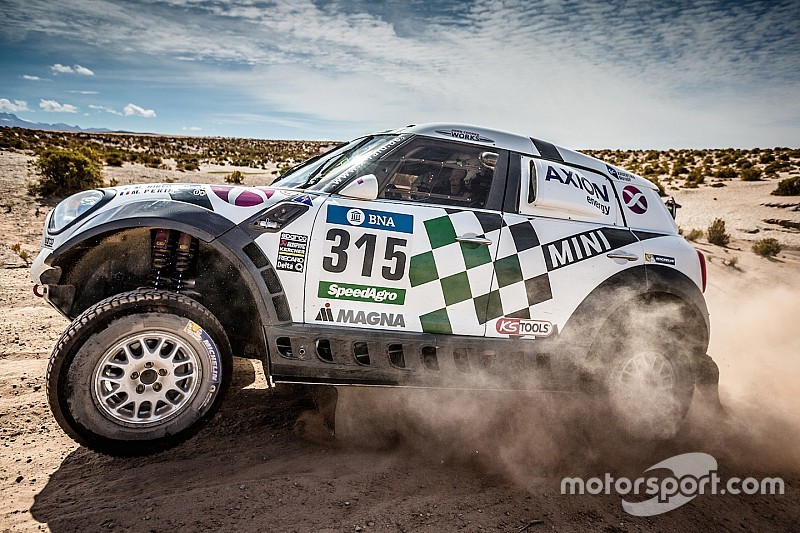 As the first half of the 2016 Dakar comes to a close with the end of stage 7, Nasser Al-Attiyah (QAT) and co-pilot Mathieu Baumel (FRA) hold on to fourth place overall to maintain their position as the leading duo of the MINI ALL4 Racing family. The pair drove tactically and enjoyed a late charge into third place in today’s stage to hold on to their position ahead of the Sunday rest day when all drivers and teams re-group and prepare for the final week of this year’s race.

“It was a good day without any problems,” said Al-Attiyah. “Today, I try to keep my position and now we’ll see what we can do in the next week of Dakar.”

However, Dakar rookie Mikko Hirvonen (FIN) and co-pilot Michel Perin (FRA) in the AXION X-raid Team MINI ALL4 Racing #315 continue to close in on the experienced pairing. Another good stage for the newcomers saw them improve their position in the overall standings once again, moving into fifth just behind the #300 AXION X-Raid Team MINI ALL4 Racing of Nasser. Hirvonen and Perin are embracing the challenge of their first Dakar together and attributing much of their remarkable success to strong teamwork.

Hirvonen: “Today’s stage didn’t actually feel so long when it was divided in two bases. The road sections were long but we were happy with the stages and had really good speed. There was quite tricky navigation in places but the set-up is working perfectly, and it’s really nice how we can find our way together. There are little lines here and there but I can still brake early enough when Michel knows where they’re coming so it’s working perfectly. We have one week behind us and I’m really happy with how it’s going; fifth position is good.”

Stage 7 was a long day broken down into two separate sections with a liaison in the middle to provide a small reprieve for the drivers, some of who continue to feel the effects of high altitude and tiredness. In addition, bad weather once again posed a threat, with severe thunderstorms curtailing the distance of the bikes stage but with river levels dropping in time the cars were able to complete both stages fully.

The competitors have now moved to Salta in Argentina for a well-earned rest day, which will enable them to organise their attack for the second half of the Dakar, get to grips with the road books and ensure that they and their cars are prepared for what may come in the next week.

Dutch crew Erik van Loon and Wouter Rosegaar (Van Loon Racing #306) are perfectly poised to break into the top ten positions in week two, having manoeuvred their way into 11th place overall at the end of stage 7, but competition remains high.

The Spanish pairing of Joan ‘Nani’ Roma / Alex Haro (AXION X-raid Team #304) also moved up another place and are now in 12th position.

Roma: Today’s stage was a long one but I prefer the longer stages because it is more suited to me. The beginning was strange; we started well, maybe not perfect, but we were going ok and I also started the second stage good, but me and Alex only realised now that we haven’t had a lot of time working together. Every day we are close together and still learning, but it’s really complicated. Alex has made a big jump, it’s really amazing, and he’s doing really well; every day he is better and better.”

British driver Harry Hunt and co-pilot Andreas Schulz finished the stage happy, having moved up the overall standings from 15th to 13th in the X-Raid Team MINI ALL4 Racing #323. The progress was made despite suffering a puncture in the second part of the stage.

Hunt: “The first part of the stage went really well; no risks, we had a really good rhythm, and me and Andy are working really well together. Then we had the second stage, which started off really well but 20k before the end we got a puncture and we were in some dust with people around us. It wasn’t too good but we can’t complain, to get a puncture in 346k is just one of those things and we’re still in 13th place overall so I’m very happy.”