After another memorable Dakar Rally, our correspondent Valentin Khorounzhiy picks his top 10 performers from the 2017 running of the gruelling South American event.

A lowly 13th-place finish shouldn't mask the fact that Hirvonen was so clearly X-Raid Mini's benchmark man in Dakar 2017, even if getting that mantle was made easier by teammate Yazeed Al-Rajhi being not fully fit.

The new Mini John Cooper Works didn't appear to be in the same league as its Peugeot and Toyota rivals, yet the signs were promising early on as Hirvonen put in consistent shifts and capitalised on rivals' misfortunes to rise up the order.

Ultimately, his victory bid was undone by a Stage 5 navigational error, while a disastrous day later on, punctuated by a broken gearbox and a strange incident with a truck, made sure Hirvonen would come nowhere near his excellent 2016 rookie effort of fourth place.

But the Finn is confident he's made significant strides since, and there's plenty in his Dakar 2017 campaign to support that suggestion.

“I think we did well, we were fast. It kind of gives me good encouragement for the future.” 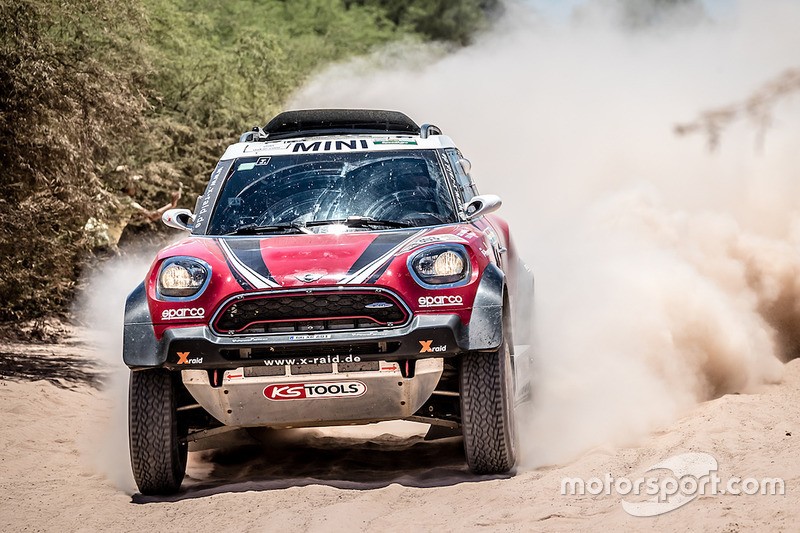 Former motocross champ Walkner did not finish the Dakar Rally on either of his two prior appearances – and his second retirement last year had left him with a broken femur and facing a long recovery.

For 2017, the goal was a relatively modest top five, and as many other frontrunners either dropped out or stumbled, Walkner was only too happy to surpass expectations and make up a KTM 1-2 behind good friend Sam Sunderland.

Perhaps he could've been there with the Brit if not for a couple of really bad days for navigation, which the Austrian was a rather vocal critic of. He eventually figured out his approach though, and just in time to make good his sudden podium bid.

“It's a dream come true. After my situation and also Sam's, the Dakars not finished, the broken femur – and we can stand on the podium as 1-2. It's amazing.” 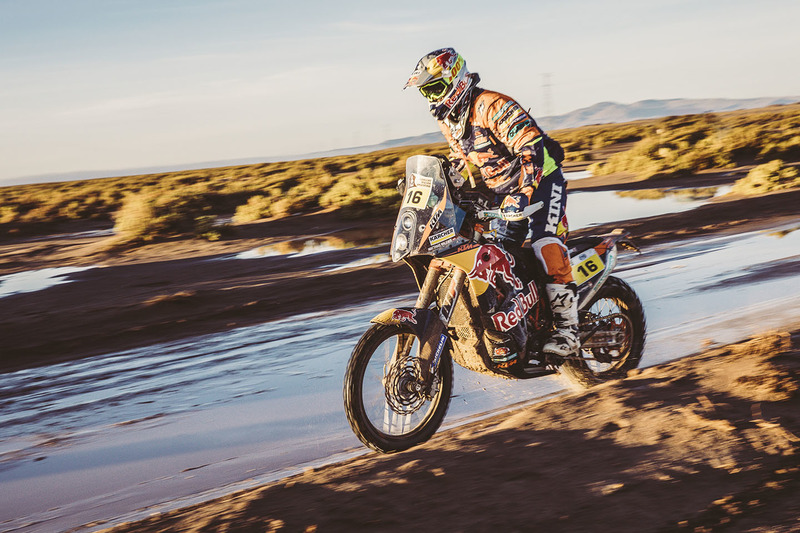 Firmly among the quad pre-race favourites after a solid run to fourth in 2016, Karyakin was out of the top 10 and more than 20 minutes adrift of the leader two days into the 2017 contest.

But as many contenders as there were, the attrition rate was also seriously high – and it was all uphill from there for the Russian, as he soon formed a breakaway group with French duo Simon Vitse and Axel Dutrie and former champion Ignacio Casale.

Soon enough only Karyakin and Casale were left standing, and a dominant third stage win by the Russian on the penultimate day allowed him to afterwards coast to the finish line with a mammoth gap of one hour and 15 minutes.

“Four years we were going for this goal. This year we had everything – a good team, a good quad, probably a good rider. Everything came together. We deserve it.” 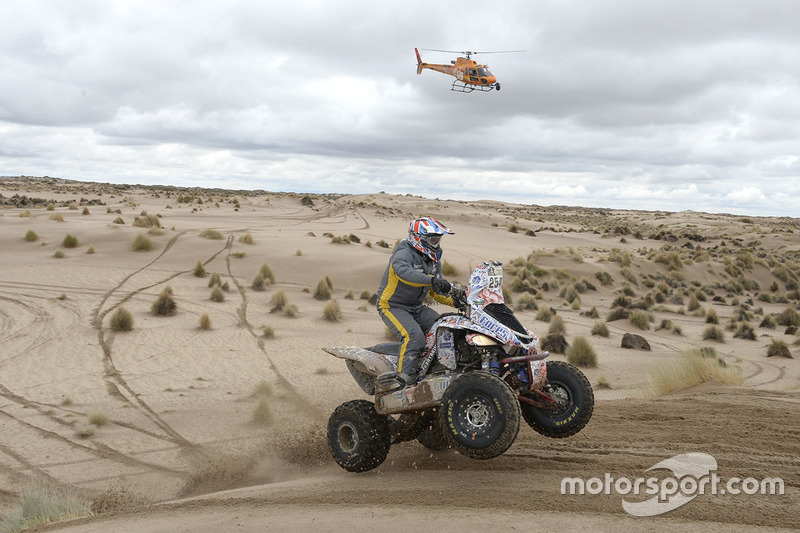 As he's getting better and better in his Peugeot stint, former Dakar bikes superstar Cyril Despres is very likely a multi-class champion-in-waiting – but for now he's still not quite there with his teammates, all of whom are vastly more experienced on four wheels.

That didn't stop Despres from winning Stage 5, although it was one where all the other Peugeot drivers hit trouble. It also didn't stop the thoroughly consistent Frenchman from remaining in victory contention until the closing days and making up an all-Peugeot podium. 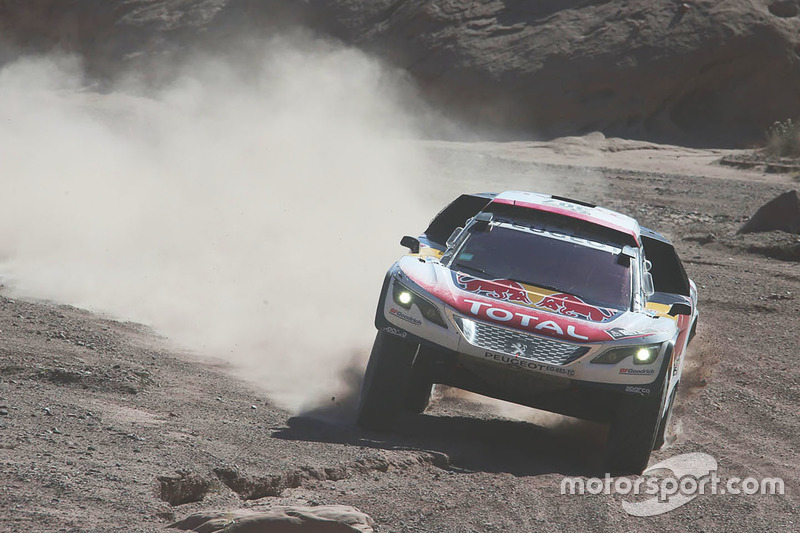 So good is Kamaz's Dakar record that its victories don't really feel as remarkable as its defeats – but after a rather bad loss to Iveco's Gerard de Rooy in 2016, you could be left wondering whether the Russian marque's spell of dominance was not so much dented as broken.

But in a year where other trucks looked very much capable of ensuring back-to-back losses for Kamaz, Eduard Nikolaev and Dmitry Sotnikov stuck in. They kept with de Rooy when the Dutchman looked ready to pull away with successive first-week stage wins, and then monopolised the victory battle when de Rooy hit trouble.

The less-experienced Sotnikov gave it a good go, but Nikolaev looked just that bit faster in the final stretch, bringing home his second Dakar win as a driver.

“I reckon we won through consistency and physical condition. It was a tough race, and we again couldn't lead from the get go – but we adapted. We showed we can get the job done.” 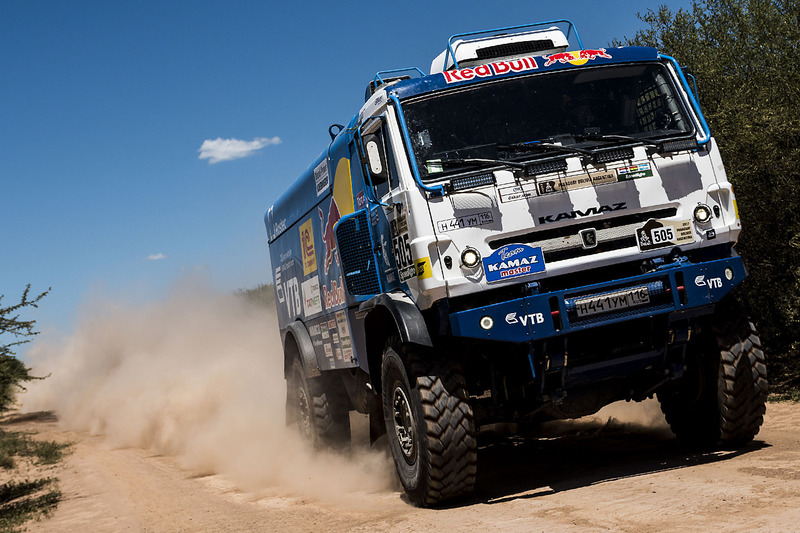 As Roma called time on a five-year stint with X-Raid Mini, which yielded him a Dakar title in 2014, he definitely risked having his Toyota debut overshadowed by the fact an in-form Nasser Al-Attiyah was making the very same move.

But Al-Attiyah exited the 2017 rally on Stage 3 while fighting for the lead, and it was Roma who took over as the main – and soon enough the only – Toyota competitor who could hope to ruin Peugeot's party out front.

“We knew we're in difficult company. You've seen it every day – Peugeot is a factory and our resources are more modest, but in the beginning we've been able to compete, to make things difficult for them.

“Finishing fourth is a bitch.” 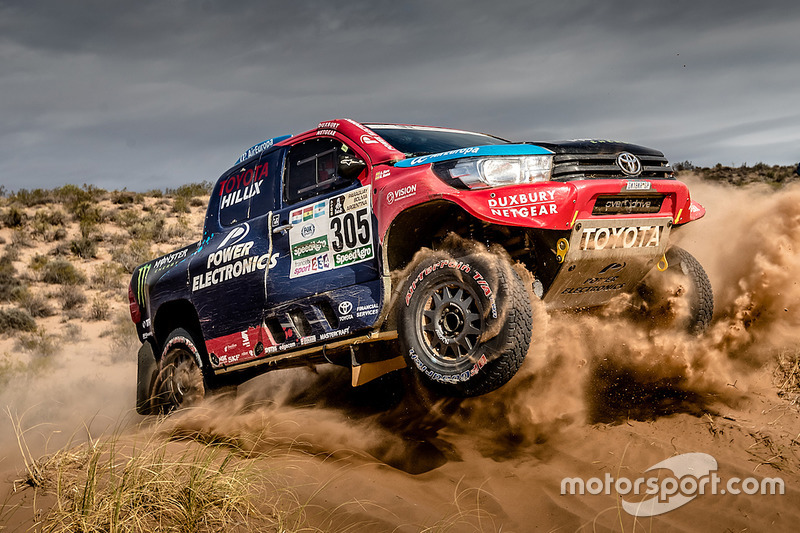 KTM's reigning champion Toby Price's early exit through a terrible crash meant the Austrian marque looked in with a seriously difficult task of keeping alive a winning streak that goes back to 2001.

Sunderland, the rider likeliest to keep that streak alive, was well aware of the stakes, but insisted his goal, first and foremost, was to bring it home – something he hadn't done in three previous attempts.

But as navigation wreaked havoc and Honda factory riders copped a big penalty, the rapid and consistent Brit was suddenly in prime position to win. His lead, from there on, was threatened at times but never seriously dented – and he managed the race to the end.

On whether he was thinking of victory, Sunderland said: “I tried to block it out. Obviously it's there and I kept telling people I'm not thinking about just to try and convince myself – because on the bike 14 hours a day there's a lot of things that go through your head.

“It’s been difficult. The last six days leading have been a lot of pressure.” 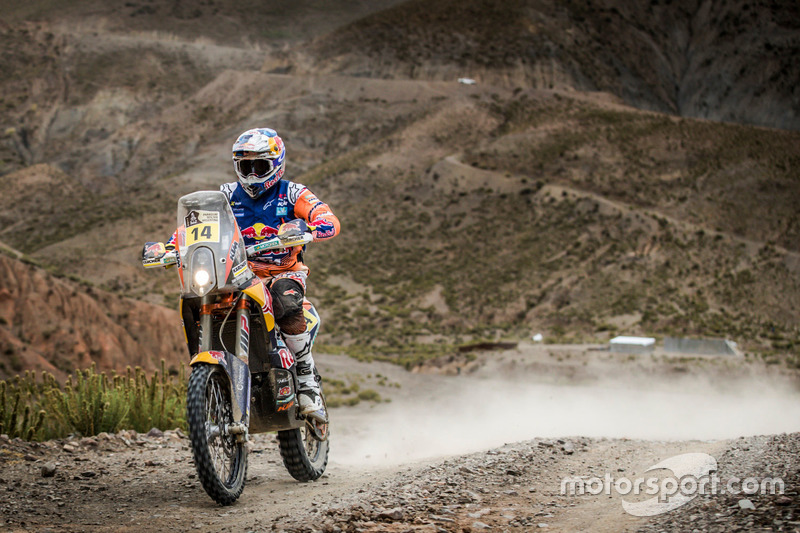 Sunderland's victory would probably not have been possible without the misfortunes of Joan Barreda, who just cannot catch a break when it comes to the Dakar. The Spaniard now has a whopping 18 stage wins to his name, but has yet to even stand on the podium.

This year, his victory bid was undone by a one-hour penalty for illegal refuelling, which seemed to stem from a mass misunderstanding among the Honda riders, and subsequent troubles with navigation on Stage 5. He probably could've recovered from one of those, but not both.

It was a crying shame for Barreda, whose performances otherwise, his navigation skills and his ability to slide around in the mud, drew hearty praise from his rivals. He was particularly commended for winning Stage 4 while opening the road – a notoriously tough ask – before that win was written off due to the penalty.

“It was difficult to accept that I really had that penalty, and that all the work done in the early stages to manage, to attack, to calculate my approach, was for naught. But I had to concentrate again, do my best and run great stages until the end.” 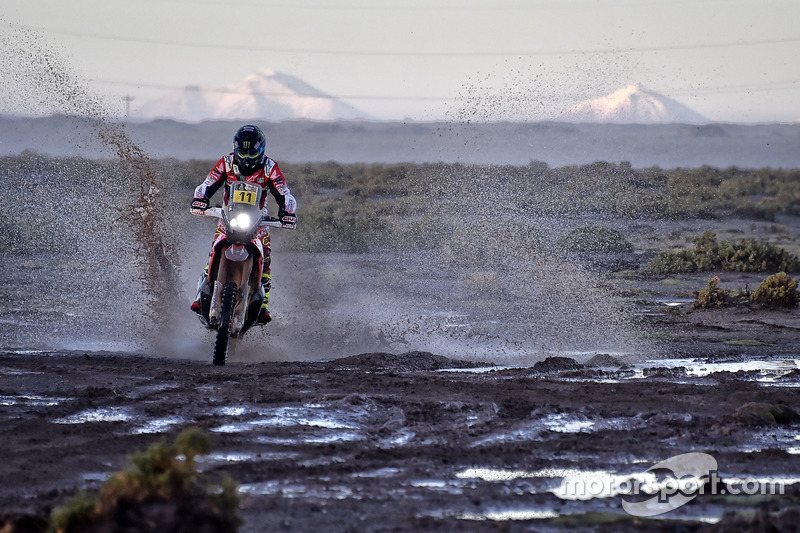 Peterhansel's 2017 victory meant his car class record surpassed his bikes record, and and he was now up to 13 wins overall – a truly remarkable count for a race that can so often be decided on one moment, one mistake, one mechanical failure.

He was probably not the quickest driver in the pack this time around, and the navigation wasn't all perfect, but the time losses were limited in both areas – and that was key to his success.

“At the beginning of the race I was not sure about this victory, it was a big fight with six-seven drivers, after it was only four - and in the last week it was just the two.

“Seb [Loeb] and I, we fought really strong. In the end, I am the winner... probably this is the victory of experience, again.” 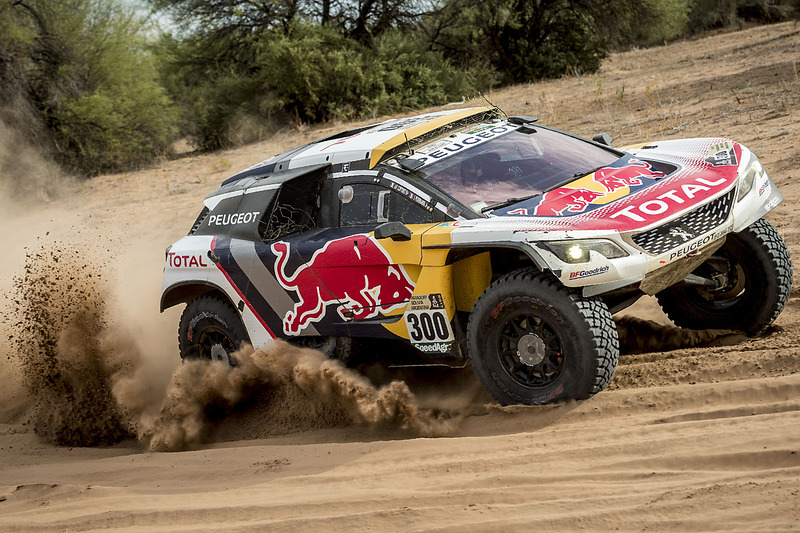 On his Dakar debut in 2016, WRC legend Loeb was already racking up stage wins, but those came with the caveat of it being a largely WRC-style route – relatively straightforward in terms of navigation and terrain.

Dakar 2017 ramped up the difficulty, but Loeb and co-driver Daniel Elena had done their homework. This time around, they were seriously rapid whatever the challenge.

At the finish, Loeb lamented the engine issue that cost him more than 20 minutes on Stage 4. To ask whether he would've won without it is revisionism, but the fact stands that he did a phenomenal job to recover and go toe-to-toe with Peterhansel throughout Week 2.

And there's still a bit of a sour aftertaste that we were denied a proper final showdown between the pair when Loeb took half of Peterhansel's six-minute lead midway through the last normal-length stage, only to drop back for a puncture.

You can't really make predictions for upcoming Dakars, whether a year in advance or a week in advance. But what you can say is that Loeb is an absolute class act and that a maiden win in the coming years looks extremely probable.

“It was a long race, to finish second is a good result... I think we still were really fast, it seems that we are on a good way for the next rallies.” 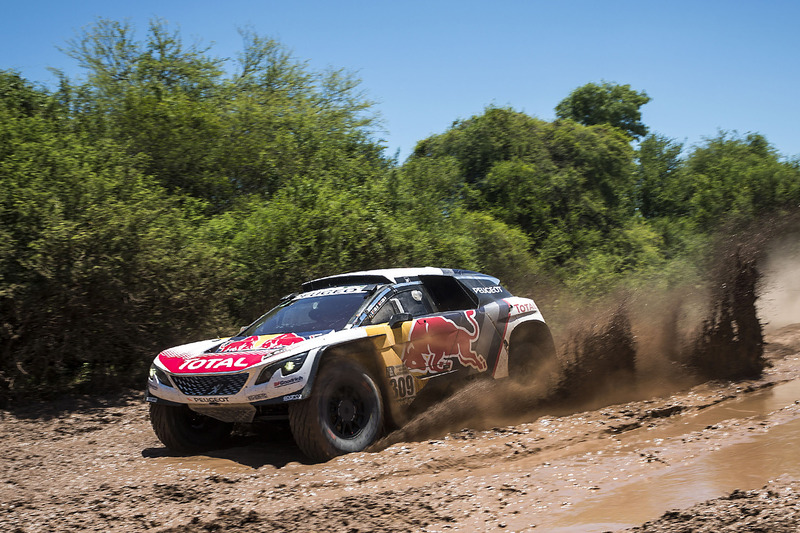 Husqvarna's Pablo Quintanilla mounted a strong challenge against Sunderland for much of Week 2, as the Chilean looked the only rider with the pace to make up the Brit's gap. He was edging towards Sunderland on Stage 10, but got seriously lost and crashed out heavily later in the day.

Quintanilla's exit opened the door to a landmark podium for KTM privateer and Marc Coma's former water carrier Gerard Farres, who had to see off Yamaha's Adrien van Beveren in a multi-day battle. The latter has a lot of reasons to be content despite missing out on a top three, as he managed several seriously eye-catching stage runs in what was just his second Dakar.

Also deserving of a mention is Paulo Goncalves, who picked up the same one-hour penalty as fellow Honda rider Barreda and was within 10 minutes of his speedy teammate at the finish line.

Among the cars, both Nasser Al-Attiyah and Peugeot's Carlos Sainz looked more than quick enough to challenge for victory. But they crashed out before the victory battle really got going – Al-Attiyah in Stage 3, as he was set to take the lead, and Sainz in Stage 4, likewise heading for the rally lead at the day's end.

Al-Attiyah's Toyota teammate Giniel de Villiers had a few solid stages in the Peugeot-dominated Week 2 of competition, but ultimately couldn't make much ground up after his early-race problems.

He was also given a good challenge for what would end up fifth place by Orlando Terranova, who was given Bryce Menzies' spot in X-Raid Mini's primary line-up at late notice and would finish the race as the team's top driver.

Slotting in between race-winning teammate Nikolaev and outgoing champion Gerard de Rooy, Dmitry Sotnikov did a diligent job after having been promoted from a technical support role within Kamaz, while Argentine rally ace Federico Villagra – a podium finisher on his class debut in 2016 - was close behind team boss de Rooy in another impressive outing.

In quads, Karyakin's winning margin didn't reflect the class of the challengers he had to fend off. French rookies Simon Vitse and Axel Dutrie put themselves on the map with credible victory challenges, while local Bolivian favourite Walter Nosiglia and reigning champion Ignacio Casale joined Karyakin as multiple stage winners.