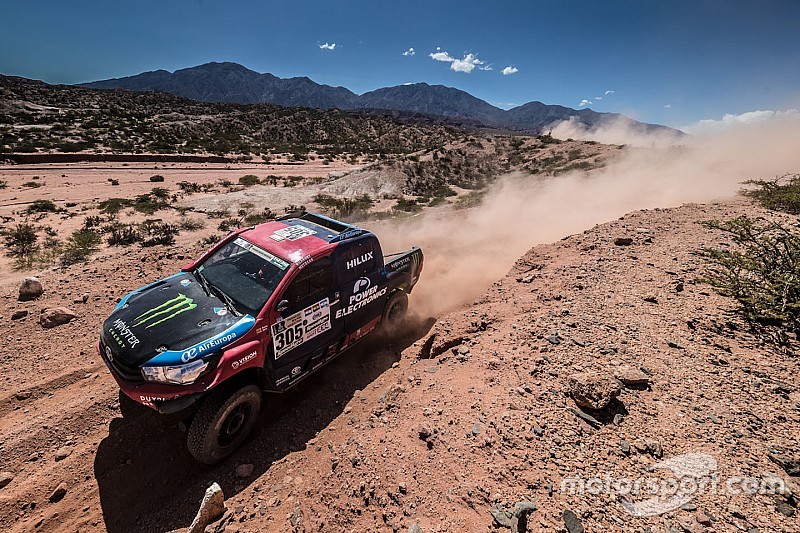 The first few days of the 2017 edition have already served up a few high-profile retirements - with Toyota's Nasser Al-Attiyah and Peugeot's Carlos Sainz crashing out, and Mini's Yazeed Al-Rajhi feeling too unwell at altitude to continue competing.

Peugeot duo Sebastien Loeb and Stephane Peterhansel have also lost major chunks of time, as did de Villiers and, to a lesser extent, Roma.

Recounting his difficult run through Thursday's Jujuy – Tupiza stage, de Villiers told Motorsport.com: "It just doesn't seem to go our way. We got lost a bit on the first waypoint, I got stuck in the soft sand for about four minutes, then we had two punctures after that, and we got lost again at the second waypoint. No problems with the car, just getting lost, punctures and being stuck.

"It would be nice to have a clean stage and then we could see. I think the Peugeot is the car to beat for sure, especially for this type of stage.

"For sure, [at Peugeot] only [Cyril] Despres that had a good day, the rest all had a bad day. Carlos rolled close to the finish, Stephane lost a lot of time, Loeb lost a lot of time – we were just two minutes slower than Loeb. I expect two or three more stages with big time gaps like that."

Asked if he expected more top contenders to drop out of the running in the coming days, de Villiers said: "For sure, it's difficult for everybody."

His sentiments were echoed by Roma, who had a solid run through the fourth stage and now sits just 10 minutes off rally leader Despres.

"The day wasn't bad, but I had two punctures in the second part [of the stage]," Roma told Motorsport.com. "I haven't had any day free of problems, but I think it could've been worse. We have done very well, Alex [Haro, co-driver] has done great work.

"Every day something has happened [in this race]. It's a kind of race that suits me, but I suffer, too, it's not easy for me either.

"We'll wait and see, I expect more retirements tomorrow and the day after – we will see by rest day. This race, it's so tough – and this year even more so."

Sanz reveals "rage" after being led astray by Dakar rival

Loeb relieved to be close to Dakar lead after engine woes