Two MINI ALL4 Racing in the top ten 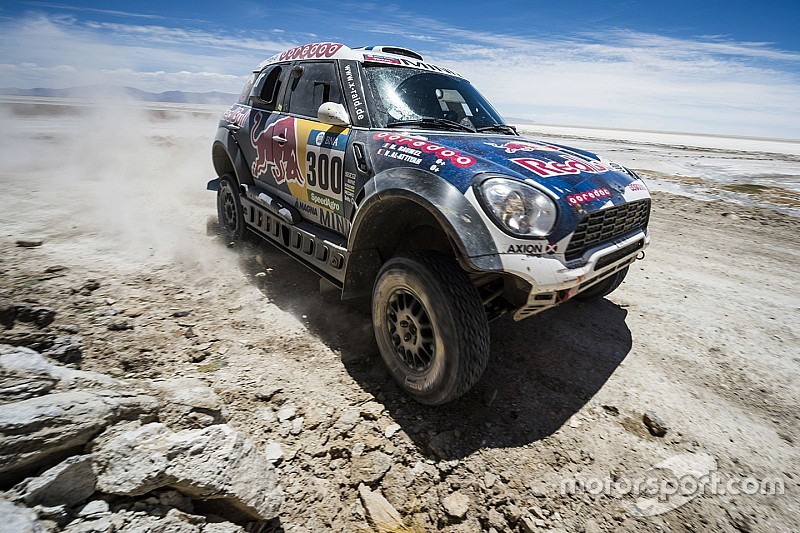 Nasser Al-Attiyah (QAT) and co-pilot Mathieu Baumel (FRA) are still the leading duo of the MINI ALL4 Racing family. At the end of Stage 6, the accomplished pairing crossed the finish point in their AXION X-raid Team MINI ALL4 Racing (#300) in fourth place. This hard fought result means they retain fourth position overall and now 15:19m behind new race leader Stéphane Peterhansel.

“The longer stage was nothing special,” said Al-Attiyah. “We tried to finish without any problems. We did a good job but are lacking a little speed compared to some competitors. But it is okay and we try to keep our position at number four and at least we are at the front of all the other 4x4. If we can be in the top three soon it would be fantastic for us.”

Dakar newcomer Mikko Hirvonen (FIN) continued his exceptional learning curve across the mountainous plains and changing terrain of Bolivia. With experienced co-driver Michel Périn (FRA) by his side, this partnership within MINI ALL4 Racing #315 came home in eighth place to take up the number six position within the top ten competitors.

Hirvonen: “It was a long day. We are quite happy that we didn’t have any problems, not even a puncture or anything. It was a bit more difficult to read the road than yesterday. I was not so confident to have a big attack. The car is in one piece and we are feeling ok so it wasn’t so bad. I’m happy with the way things are going. Maybe I’m a bit too careful, but that helps us not to have any problems.”

Nine MINI ALL4 Racing are in the overall top 20

Stage 6 consisted of 723km of driving, of which 542km was dedicated to the Special Stage – the part of every stage where the competitors race against the clock. This 542km route happened to be the longest special section at this year’s Dakar Rally and took place 3,200-4,500 metres above sea level.

Orlando Terranova (ARG) and co-driver Bernardo ‘Ronnie’ Graue (ARG) continued to push their AXION X-raid Team MINI ALL4 Racing (#310) to the limit and net a creditable seventh place at end of Stage 6. As was expected, Terrranova moved up the order of competitors and is now placed just outside of the top ten in 11th place overall.

The Spanish pairing of Joan ‘Nani’ Roma / Alex Haro (AXION X-raid Team #304) made better time today in the thin mountain air that badly affected Roma’s effort during the start of Stage 5. By completing Stage 6 in sixth, ahead of Terranova, Roma has again made big strides up the leader board, taking four places, and is now 13th overall.

“I feel better – I definitely don’t feel the pain I had with yesterday’s first 100 kilometres,” said Roma. “Overnight I was stressing; I didn’t have any moment to rest or anything. But I made a good stage. I arrived behind Orly in his dust about 300 kilometres into the stage. His trail of dust had a length of about 150 metres, and so he couldn’t hear the sentinel. But I don’t like to take any risks. In the end it was ok.”

Dutch crew Erik van Loon and Wouter Rosegaar (Van Loon Racing #306) retain their position of leading privateer from the MINI ALL4 Racing family at position 12. But how long will the Dutch pairing remain in this position? Jakub ‘Kuba’ Przygonski (POL) / Andrei Rudnitski (BLR) of ORLEN Team (#327) and Harry Hunt (GBR) / Andreas Schulz (GER) in MINI ALL4 Racing #323 are less than 15 seconds behind in the overall standings.

During Stage 5, the crew of Lopez (ARG) / Sergio Lafuente (URU) (#351) unfortunately suffered damage after hitting a rock. The crew worked hard to make repairs to their MINI ALL4 Racing in order to complete Stage 5. They eventually did so and returned to camp very late in order to compete in Stage 6.