Yamaha counts down to adventure for the 2013 Dakar Rally 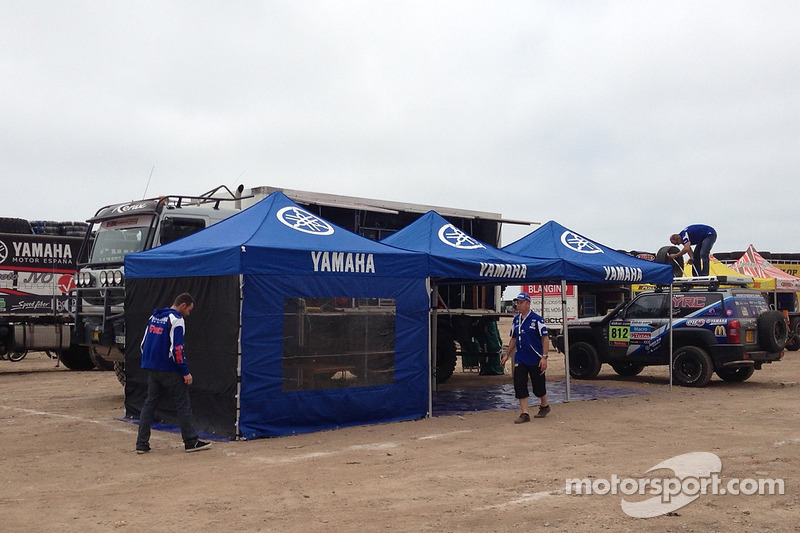 A total of 49 Yamaha machines including the bikes and quads are ready for the start in Peru.

As the New Year begins, so does Yamaha’s first racing challenge of 2013. Having spent 21 days at sea crossing the Atlantic and passing through the Panama Canal, the Yamaha Netherlands Verhoeven Team’s Yamaha YZ450F four-stroke based machine and support equipment for Dutch rider Frans Verhoeven has arrived in South America and is undergoing technical inspection with 195 fellow two-wheeled competitors on the beaches of Lima, capital city of Peru. The team is set and prepared for the first event of the 2013 Dakar Rally, the special stage at Chorillos on January 5th. 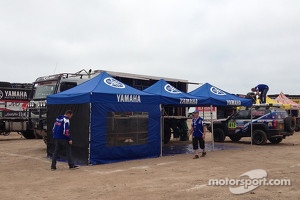 Frans Verhoeven, who has recently signed a two-year contract with Yamaha Motor Europe and Yamaha Motor Netherlands for the 2013 and 2014 Dakar Rally, is no stranger to the competition. His first Dakar experience was 2005, the Dutchman gradually increasing his experience to finish a career best of eighth in 2009. Verhoeven can also claim three stage victories along with two top three finishes in the 2012 Rally. Yamaha can claim a special place in the Dakar story, having won the first two ever Rallies in 1979 and 1980 with the Yamaha XT500 and rider Cyril Neveu. The manufacturer has gone on to claim a total of eight titles from 1979 to the present and is optimistic of at least a top five finish with Verhoeven on-board.

In preparation for the 2013 Dakar and to familiarize himself with the Yamaha YZ450F bike and support team, Verhoeven entered the Libya Rally du Maroc in October 2012. The ‘training exercise’ proved extremely successful with rider, machine and staff all performing above expectation, taking fourth in the final standings.

“The main goal with the Libya Rally in October was to get to know the Yamaha 450 and work on its set up,” said Frans Verhoeven. “I was really impressed with its speed and the smoothness of the engine. It was my first time riding with this kind of engine management control and traction control so it took some understanding but my confidence has really grown. It was a pleasure working with the mechanics, we understand each other very well and most importantly we had no crashes and no technical problems! I think we have the potential to do really well in the rally, the potential of the bike is great and the support from Yamaha is essential for success.”

Frans Verhoeven will not be the only rider representing Yamaha in the rally. Yamaha Racing France Yamalube riders Olivier Pain and Michael Metge will be putting their YZ450Fs to the test in South America alongside David Casteu riding for the Casteu Adventure Team and former stage winner David Frétigné riding the WR450F for the Yamaha Racing France Power Bike Team. A total of 49 Yamaha machines will line up to contest the 2013 Dakar Rally, but not all will be two-wheeled. 2010 Dakar Quad Champion Marcos Patronelli will be fighting for victory on his modified Yamaha YF700M machine for a combined Yamaha Motor France and Yamaha Argentina entry alongside defending World Cup Rally Quad Women’s Champion Camellia Liparoti, also on the YF700M quad.

“Yamaha has a real pedigree in the Dakar Rally,” commented Yamaha Motor Europe Racing Manager, Laurens Klein Koerkamp. “Our production machinery has been there fighting at the front, from the very first rally with Cyril Neveu in 1979 to our last victory in 1998 with Stéphane Peterhansel. We are confident that with our official support and technical experience through Yamaha Motor France, the combination of riders Verhoeven, Pain, Metge, Casteu and Frétigné and the modified YZ450F and WR450F can challenge for at least top five results.”

The Dakar Rally was moved to Beunos Aires in South America in 2009 following terrorist threats to the competition in 2008 in North Africa forcing the last minute cancellation of the event. The 2012 Rally ran from Mar del Plata in Argentina, ending in Lima, Peru. The 2013 Dakar Rally will officially start on the 5th January in Lima and will head south for the first time. The competitors will embark on an arduous and grueling journey of 14 stages over 8,000km through Peru, Argentina and Chile to the finish in Santiago de Chile on the 20th January.

Dakar Village: There is more to Peru than just Machu Pichu

Dakar Day-2: The pressure cranks up a notch