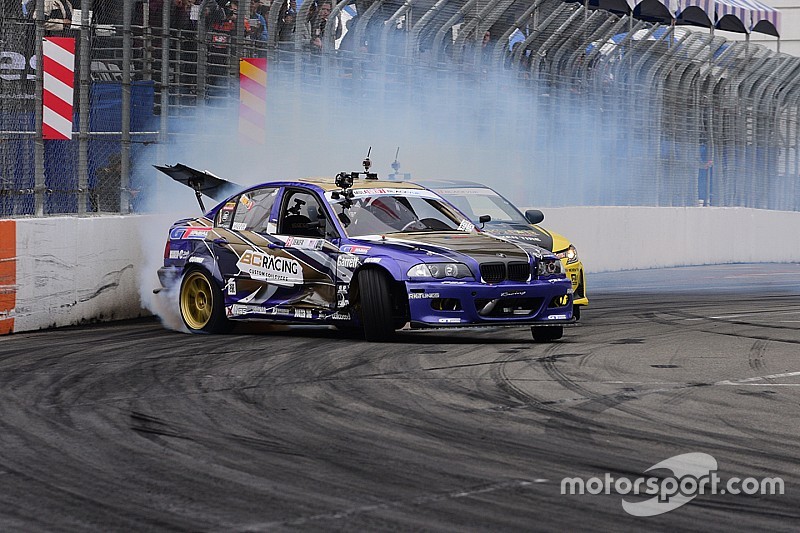 Formula DRIFT’s 13th season began in a most unusual fashion and for the 11th straight year, it began on the Streets of Long Beach, this year held under cloudy and occasionally rainy skies.

Who’s that, you ask? Denofa has been driving Formula DRIFT for 12 years and capped this weekend with his first victory in the series, despite losing a point in the finals for pranging his rear wing in the first of two passes before the judges and fans.

The weather didn’t stop competition on Saturday, but it did halt qualifying on Friday afternoon, leaving five racers out in the cold, both literally and figuratively. With rain on and off on Friday, there were plenty of incidents to keep tow truck operators doing rescues, making the decision to suspend qualifying by Formula DRIFT organizers a wise one.

The field of 32 was then bracketed by last year’s points, putting Denofa 16th and forcing him to face Geoff Stoneback’s Nissan 370Z, whom he handily exorcised. Then it was on to two-time champion Chris Forsberg, who was first on the track Friday and first to whack his car against the walls. Denofa sent Forsberg’s Nissan 370Z back on the trailer.

Denofa then went up against Ken Gushi’s Scion FR-S and defeated him as well, putting the American against Aasbo, the Norwegian who’s made Southern California his adopted home. Aasbo got to the finals by defeating China’s Shengun Zhang in a Nissan 240SX, taking out Kiwi “Mad” Mike Whiddett’s Mazda MX-5, and out-pointing Aurimas (Odi) Bakchis’ Hyundai Genesis.

In the final it appeared (to these eyes and to those of quite a few fans in the stands) that Aasbo was playing it a bit safe. He’d had some electrical and engine difficulties in the race meeting, having to make an engine swap on Friday, but still Aasbo finished second, which is no small beans. Third went to Gushi while Bakchis earned fourth.

Fan favorites Vaughn Gittin Jr (Mustang) made it to the quarter-finals, while Justin Pawlak’s Mustang was eliminated in the Round of 32. Matt Field (Nissan S14), Ryan Tuerck (Scion FR-S), Forrest Wang (watch out for this kid’s Nissan S15) all made it to the Great Eight before their days ended.

What was most amazing about this weekend was not just the competition, which was fierce as ever but the fact that fans filled nearly every seat – despite the rain as they entered and the threat of even more throughout the day. The enthusiasm was contagious and fans’ preparation for conditions at hand showed the support that Formula DRIFT has at The Beach.

Next stop is Road Atlanta May 6-7, a favorite of racers and fans alike. Can Chelsea DeNofa defy the odds a second time?