Formula DRIFT Round 3: Road to the championship results 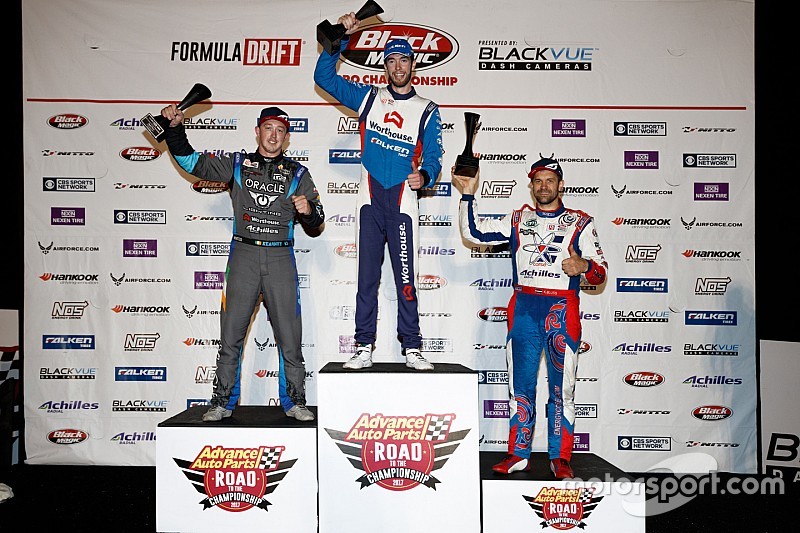 James Deane takes back the lead with the event victory

“This event showcased the global talent within the Series,” said Jim Liaw, president and co-founder of Formula DRIFT. “Each round has been highly competitive and with only three events remaining it will be exciting to see how it unfolds.”

The Advance Auto Parts Round 3: Road to the Championship was a hard charging event and treated fans to exciting competition. An estimated 1 million viewers tuned into the Livestream through the event weekend.

It was an all European podium with Latvian driver, Kristaps Bluss in the HGK / Mast / Motul / Wisefab BMW E46 taking 3rd place after failing to repair his vehicle for a One More Time battle against Irishman, Dean Kearney in the Oracle Lighting Dodge Viper in the semi-finals. The Finals was a battle of the Irish with Kearney and Deane fighting for the win. The drivers put on a show for the fans with an incredibly tight battle, but Deane was able to inch past his opponent to take the win. With three events completed, James Deane has now taken two event wins to move back into the top of the standings.

“We got to have an all-Irish final and that was just mind-blowing,” said James Deane, winner of the Advance Auto Parts Round 3: Road to the Championship. “The two of us just gave it 110%, no messing around, and that’s how to have a battle. I’m super happy and thanks to everyone who made this possible.”

The action continues to Round 4: The Gauntlet at Wall Speedway on June 2-3.

Round 3: Road to the Championship Event Results