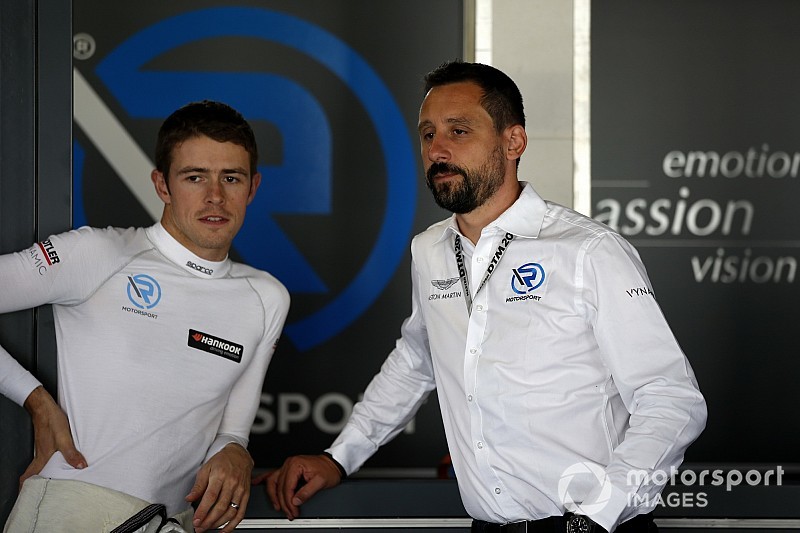 R-Motorsport boss Florian Kamelger says his Aston Martin outfit should apologise to Paul di Resta after a pitstop problem in the DTM's Assen opener lost the driver a strong result.

Di Resta lost over 30 seconds in the pitlane after a team error meant Jake Dennis stopped on the same lap and inadvertently cause a double-stacked pitstop, with Di Resta forced to wait behind his teammate.

Kamelger said Dennis had pitted on the seventh lap of 31 because it was believed Di Resta had stopped on track with a problem, when in fact the 2010 DTM champion had paused to clear oil dropped by another competitor from his windscreen in the wet conditions.

Di Resta's pace - he set a succession of fastest laps during his second stint and registered the third-fastest of all - convinced the Aston driver he was capable of finishing fourth, but instead he finished 14th.

When asked by Motorsport.com for his take on R-Motorsport's performance in the opening race, Kamelger said: "In today’s race, the pace was great and we couldn’t show it because we had a couple of issues during the pitstop, unfortunately.

"Paul was really quick, and his pace was good for at least a top 10 [finish]. We as a team have to apologise to him, we couldn’t deliver what he needed.

"When you consider traffic and different things, he would have been way higher up the ladder than he was and that’s unfortunate and I’m sorry for him.

"Jake thought Paul had broken down, it looked like Paul had an issue. Very unfortunate, things happen sometimes."

Di Resta told Motorsport.com that he felt his pace was promising throughout the race and had warranted a strong finish.

"Nothing wrong with our pace all the way through, we just lost 38 seconds in the pits with the confusion," he said.

"I got a load of oil on my screen, the lap before, but it was always planned I was coming in [for a pitstop] and there was confusion and someone else [Dennis] came in the pits and we share the same [pit]box so it turned into a nightmare.

"Catalogue of things happened which is a shame, 38 seconds and I think we only lost the win by 42 in the end. I must have been 15-18[s] down before I stopped so, in fact, I think we were as quick as anybody."

Di Resta has moved from title contention at the HWA-run Mercedes outfit in 2018 to the start-up Aston Martin project for 2019, and has played a key role in developing the Vantage.

Asked for his take on the season so far, Di Resta said: "So many issues, last race [at the Norisring] a lot of issues and again stuff out of my control today, which is a shame because I think we could have finished P4 today comfortably, even from where we were in qualifying which would have been a victory for us.

"It was an opportunity to probably score the best points of the season today. It happened.

"We’ll keep trying, tomorrow is another day and there are positives, I was happy with the car in the dry. The whole thing together isn’t quite there."