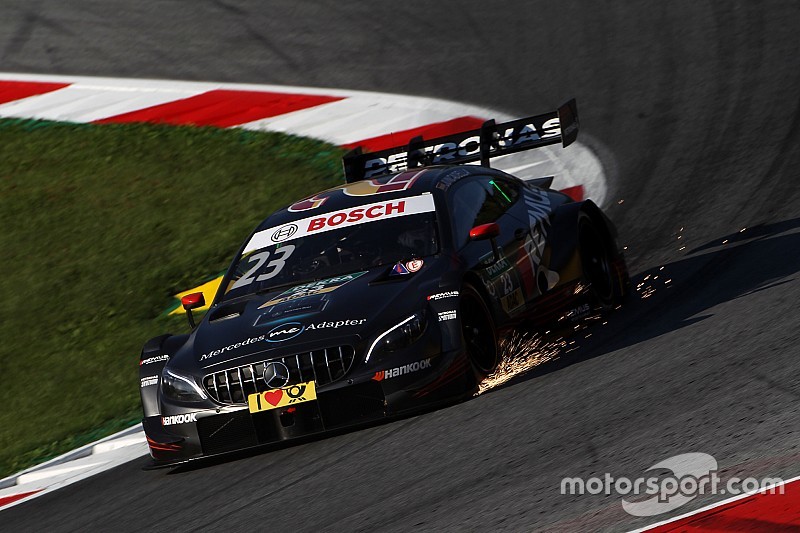 Mercedes racer Daniel Juncadella has accused the DTM of “digging its own grave” after he was penalised from an on-the-road victory in race one at the Red Bull Ring.

The Spaniard was given a 30-second penalty for a restart infringement, dropping him from first position to 14th in the results.

The Indy-style double-file restart came with three laps remaining, and Juncadella explained that his penalty came for accelerating too soon – and that he had also been investigated for going too slowly up to that point.

“I was focusing on my line driving at 80km/h,” said Juncadella.

“The rule is 60-80km/h and I went down to 68, which is within the speed allowed, but the straight is really long, and I could see everyone wanting to go.

“I could see the white line ahead and they said I went too early.”

Juncadella, who took his maiden DTM win at Brands Hatch last month, added that he would not be losing any sleep over the decision.

“What’s the point? It doesn’t change anything,” he said. “This is such a strong championship which is destroyed by such small things – it’s digging its own grave.

“To have such a great day spoiled by something like this is annoying, but I’m not going to let it get into my head.”

While talking to Motorsport.com, Juncadella was commiserated with by BMW rivals Marco Wittmann and Augusto Farfus.

“It’s nice to hear a lot of comments from other guys, other manufacturers, who don’t agree with the situation,” he said.

“I’m taking all the positive stuff – I’m not fighting for the championship so who cares about the points?

“I just missing going on the podium, and spraying champagne on everybody around!”