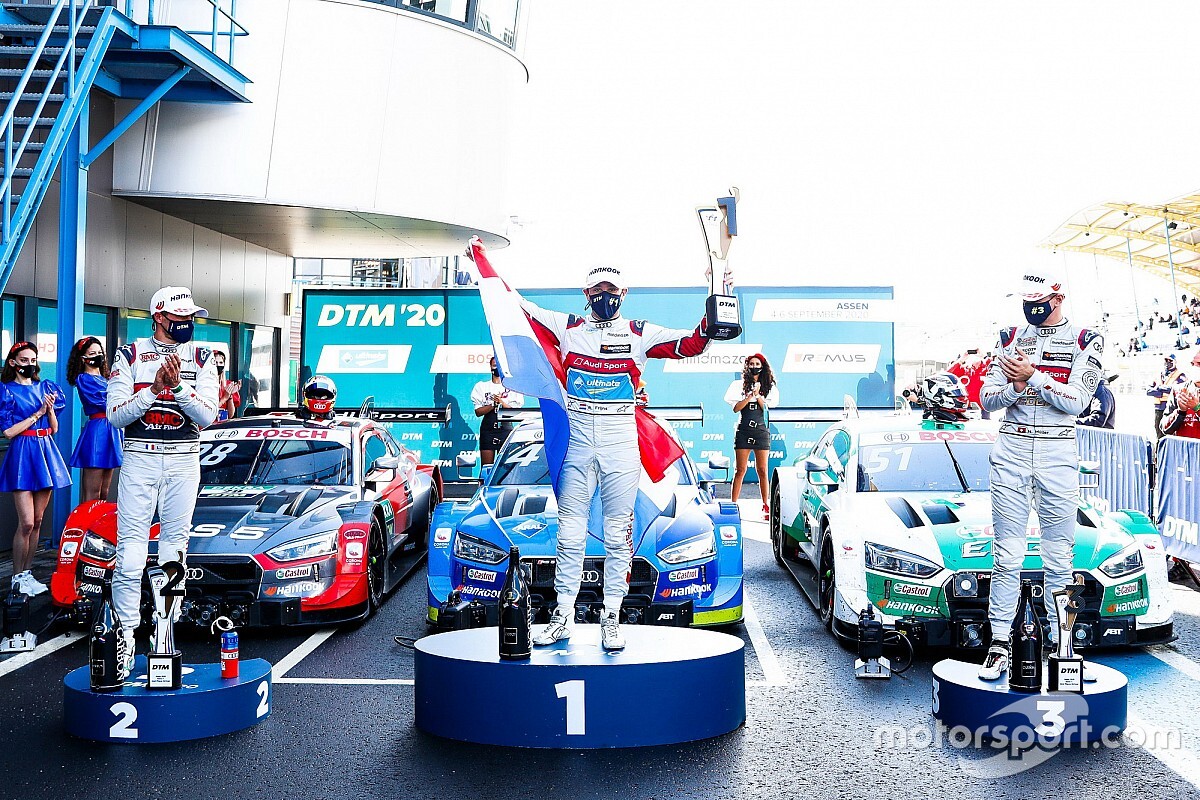 Robin Frijns says he was relieved to score his maiden DTM win at his home turf in Assen last weekend, having felt that “frustrating” Audi team orders in the past had masked his true potential.

Frijns qualified on the front row for the first of the two Dutch races on Saturday, and overhauled polesitter Loic Duval after the pitstops to secure his first victory since joining the category in 2018.

The Dutch driver has been one of the star performers of the 2020 season so far, scoring four pole positions and six podium finishes in the opening eight races of the season.

Frijns’ upturn in performance has coincided with a ban on team orders in 2020, allowing all drivers within both the Audi and BMW stables to challenge for victories without the threat of being asked to concede position to aid their employers' title bids.

Asked by Motorsport.com if the Assen victory was his best ever in any category, Frijns, a Bathurst 12 Hour and Formula E race winner, said: “Because it took so long, I think [so].

“The last three years have just been frustrating for me. Everyone knows that some team orders have been played in recent years, when I wasn't in the title game anymore.

“Now that's not so bad in itself, since team orders are gone after all. We are more free to race, although I'm not saying that makes any difference.

“But if you see that I've been close many times, that I've achieved four pole positions [so far in 2020] but haven't been able to cash in on a win, it has hurt me a bit now and then. To finally do it here is also a relief for me.”

He added: “I was second behind Loic. I had a really good pace at the beginning. I felt more comfortable in the car compared to Lausitzring.

“When I was at the Lausitzring, I lose that feeling of what the tyres were doing and I didn’t have this issue here at Assen. I had a good feedback, I knew what was happening with the tyres and that’s definitely the key to secure my first win.”

Frijns followed his victory with a second place on Sunday, only losing out to BMW’s Sheldon van der Linde, who managed to undercut the leaders with an early stop on Lap 10 of 31.

That result has placed Frijns 26 points behind teammate and championship leader Nico Muller in the drivers’ standings, with Rene Rast another 18 points adrift in third.

Muller said he had already considered Frijns a title rival in 2020, and believes the Dutch driver could pose an even bigger threat now that he has bagged his first win.

“I’ve always said that I don’t only see Rene as a competitor when I was always asked about [Frijns] the last three [race] weekends,” said Muller.

“He’s proving it every weekend. It was just a matter of time he won his first race. He did it on Saturday. Unfortunately, I’m sure it won’t be his last one.

“I think he’s one of the guys who deserves good results. He’s fast, he’s talented and we are pushing each other forwards. It will make us stronger, both of us for the rest of the season.

“I know what I can do better, I know where he will be strong, I know Rene will be back. It’s gonna be a long season. I haven't looked at the championship yet. It’s time to maximise day by day.“