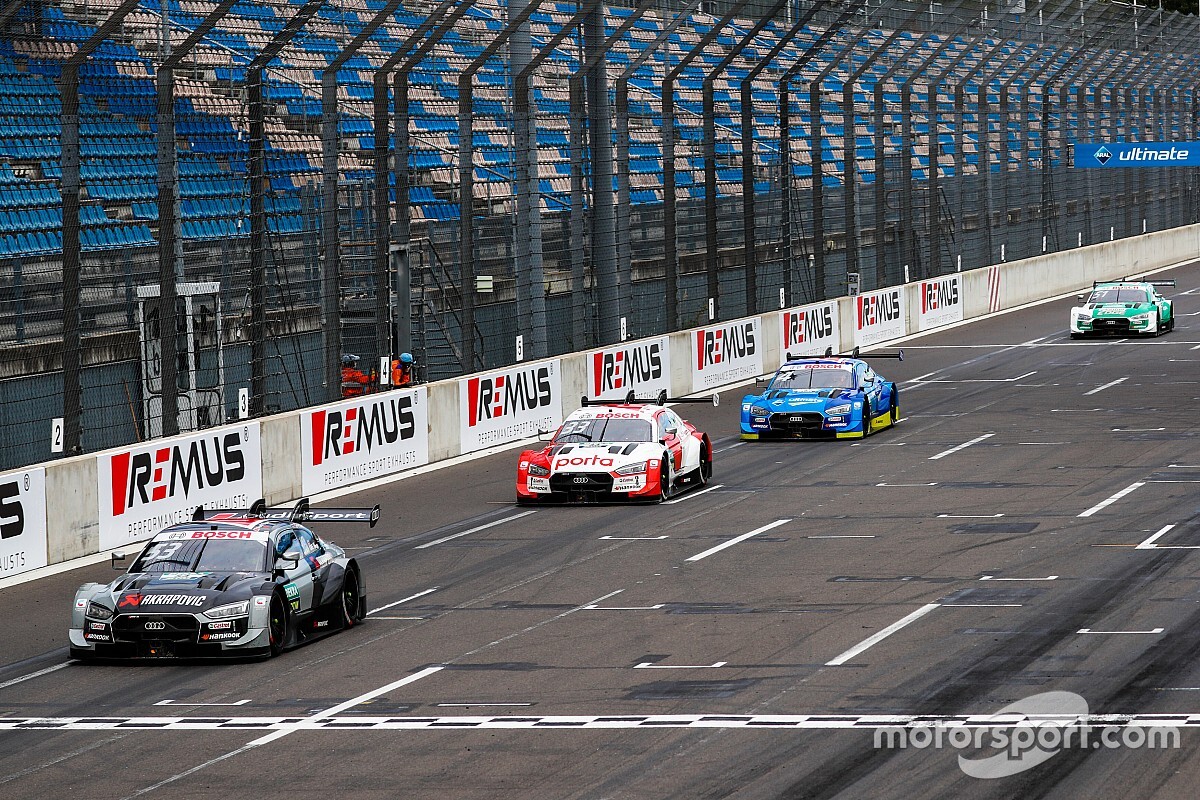 Jamie Green has defended his decision to hold position against his faster Audi DTM stablemates at the Lausitzring, despite it playing a role in BMW securing its first win of the year.

Green and the BMW duo of Lucas Auer and Timo Glock ran at the front of the field in the second race at the Lausitzring on Sunday, having undercut the Audi trio of Rene Rast, Nico Muller and Robin Frijns in the pits.

Green couldn’t keep up with the pace of Auer and Glock and fell behind the two, but launched a stern defence against Rast in the fight for the final spot on the podium.

Eventually, Frijns - who was on the freshest tyres - was able to pass Green at the exit of the final corner after clearing Rast, but by that time both Auer and Glock had escaped up the road to secure a 1-2 finish for BMW.

Speaking after the race, Rast said that he could “have had the shot” at victory had his Team Rosberg teammate Green let him through to chase the BMWs.

“Yeah obviously, all of us, Robin, me, Nico, we were closing the gap but as we saw already in other races it’s very hard to pass if the car ahead of you also uses their aids, push-to-pass and DRS," Rast said. "So it’s very difficult.

“If I could have passed Jamie we would have had the shot for the win, but it’s all just theory. But at the moment I arrived obviously we were a lot quicker and we had fresher tyres.”

Green said he took the decision to chase after the BMW duo himself, having saved several usages of DRS and push-to-pass for the final laps of the race. The DTM veteran had stopped for fresh tyres on lap 11 of 34, a lap later than both Auer and Glock.

“Yeah, it was difficult to be honest because there was a train of cars who were very close together and I still had quite a lot DRS and push to pass available,' Green said. "So I was just trying to save that to have it till the end of the race.

“And obviously Rene got quite close. I think he was using DRS at that time, got quite close into turn 1. So I tried to leave some space and we didn’t have any contact or anything.

“But it was a tricky decision. The best thing was to go for it myself and because I had quite a lot of DRS left I felt like the right thing to do, because I could attack later and that’s what I did at the end.

“Unfortunately I had maybe a little bit of grip lacking at the end, the traction to get myself in a position to overtake Auer and then Glock on the last lap. So that was a shame to be honest.

“It was an eventful race, quite hard one to tactically read whilst you are in it. From my point of view I didn’t know when the cars around me had stopped. I knew I had stopped early, but so did Auer and Glock. So I felt like I could still race them and that’s what I tried to do.”

Rast admitted that Audi drivers were too preoccupied with fighting their immediate rivals in the championship and in doing so overlooked the bigger picture of the race, allowing BMW to steal the victory with an aggressive pitstop strategy.

“In the end I’m quite dependent on the pitwall because they have the overview," Rast said when asked if he considered an early pitstop. "I can make decisions on my own but they have much better picture of the whole race.

“We were fighting mainly with Nico and Robin at the moment for P1 and P2 in the championship. So for sure the focus on more of them. But we saw what happened when we focus too much on each other. We need to also improve on that.”

Winless Frijns not satisfied by being top Audi finisher