Wiesbaden. The DTM season 2013 is history. The most popular international touring car series this year offered many spectacular races and celebrated a new champion. Audi driver Mike Rockenfeller won the drivers' title, for the first time in his career. In this interview, Hans Werner Aufrecht, Chairman of DTM rights holder and promoter ITR eV, looks back on the racing year 2013.

With hindsight, how do you assess the 2013 DTM season? What has been the most memorable feature of the year? I think we provided fantastic motor racing. I know, that’s a claim made often by us but this year, many things were different. The introduction of the DRS wing and the option tyres made the racing much more colourful. We witnessed countless overtaking manoeuvres and many spectacular scenes. It certainly didn’t work perfectly at all the racetracks but the approach was fine. I’m proud that it did the trick and that the drivers were able to make use of it. 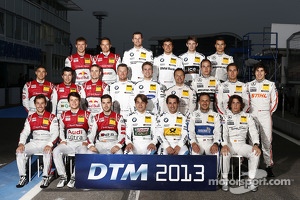 The season finale at Hockenheim turned out to be extremely spectacular - it was a race that had it all. Will this race be the benchmark for the future? We witnessed many thrilling races at Hockenheim, in the past, but last year’s season finale made us think about what we possibly could change. This time, the rain made for a grip level that allowed the drivers to really demonstrate their car control skills. I have to say that I was particularly thrilled by the drivers. It was an absolutely fair race - and one of the most dramatic ones in the history of the sport. Therefore, our only way for the future must be to reduce the grip and allow the drivers to demonstrate their skills instead of letting them drive through the corners like machines.

Have you been particularly delighted about the fact that Timo Glock, who was signed as DTM crowd-puller but had his familiarisation problems succeeded in demonstrating his true skills by winning at Hockenheim? As I see it, the topic Formula 1 often is treated somewhat disrespectfully - as if some drivers just want to supplement their retirement pension, in DTM. That’s annoying me. All these guys want to give their very best and achieve the best possible results but suddenly they realise that DTM represents a completely different task - and that they possibly don’t know how to solve it, in the beginning. But drivers such as Timo Glock who work hard and fight to succeed will prevail, in the end. Good drivers can do it. Remember Jean Alesi or Mika Häkkinen. Others possibly gave up to early but the good ones make it everywhere. That’s what was demonstrated by Timo Glock at Hockenheim.

The 10 rounds of the 2013 DTM season were attended by a total crowd of 705,500 spectators. An impressive figure but slightly below the record attendance of last year, when BMW made their comeback. What is the key to thrilling so many people on site? After all, this figure is clearly higher than the ones of the 2010 and 2011 seasons - despite the slight drop. The BMW comeback certainly caused a boom, last year. Nonetheless, I’m not satisfied as the readability of our races suffered, this year. For me, providing more man-vs.-man battles represents the key to keeping or even improving this level. That’s what’s fascinating the spectators, other than some strategic battles without direct contact of the respective opponents.

Are there some drivers you’d particularly like to see in these man-vs.-man battles? It’s absolutely correct that we also need names in DTM. How should drivers such as Roberto Merhi or Marco Wittmann make a mark if they hadn’t got the chance of defeating the big stars. As I see it, that’s the only way to become a star yourself. If we succeed in creating a grid with big stars and great young guns that’s the mix DTM needs. 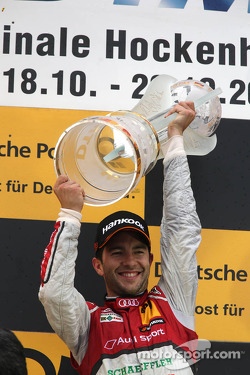 And the time up to the 2014 season kick-off is bridged by anyone with DTM Experience, the new DTM PC game… That’s something really great for our fans. It allows them to contest real races by dint of their computers and be really close to the DTM action. I’m convinced that the fans will embrace this game. After all, even our drivers are thrilled by the possibilities provided by the DTM Experience and the fact that it’s extremely realistic.

Final question: How do you asses the season of Mike Rockenfeller who won his first DTM title? From my point of view, focusing on this season only is not quite enough. Mike Rockenfeller demonstrated exactly what is important in DTM. He made a great start, in the series, but afterwards, he had to cope with several somewhat difficult periods. But Mike Rockenfeller struggled through in impressive style and never lost his self-belief. Therefore, he is a well-deserved and absolutely worthy DTM Campion. He displayed outstanding consistency and I think that his past represented the basis for his success in 2013.

The 2013 DTM season in the BMW Motorsport review

Rockenfeller celebrates his championship along with ADAC award