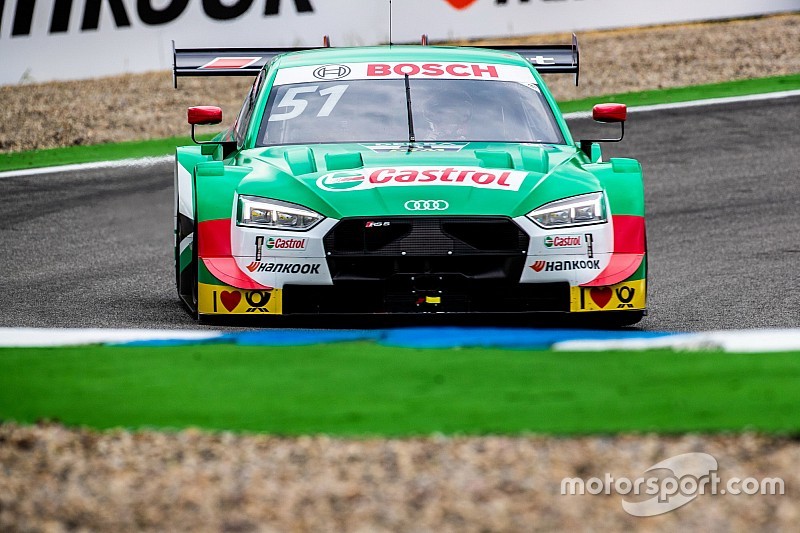 Nico Muller led an Audi 1-2-3-4 as the new-generation DTM kicked off its action with free practice for the Hockenheim opener.

The Swiss narrowly defeated the 2017 DTM pole position lap record as he lapped his Abt Sportsline-run RS5 DTM in 1m30.476s, comfortably clear of the opposition.

Rene Rast, the 2017 champion, was second fastest in his Team Rosberg car, 0.361s adrift of Muller, with both setting their times on relatively short runs early in the session.

But Frijns was at the beginning of a much longer run than the three cars that were ahead of him at the time, indicating good race pace for the Dutchman.

After a pitstop, he re-emerged to become one of the few drivers to improve late in the session, moving ahead of Aberdein to take third.

The fastest BMW was that of two-time champion Marco Wittmann, although like the Audi pacesetters his RMG-run M4 was on a shorter run.

Wittmann ended up fifth, with the Audis of Mike Rockenfeller, Loic Duval and Jamie Green next up. BMW men Timo Glock and Philipp Eng rounded out the top 10.

The four R-Motorsport Aston Martin Vantages circulated the best part of two seconds off Muller’s pace, but all but Paul di Resta put in a lot of laps, with Daniel Juncadella completing the highest mileage of all.

Juncadella was quickest of the quartet in 14th position among the 18-car field, with only BMW’s Joel Eriksson completing a bottom-four lockout for the Astons.

Eriksson understeered straight on at the Sachskurve on his out-lap at the beginning of the session, and had to be winched out of the gravel by a tractor.

After a long time in the pits, he rejoined to improve late in the session.