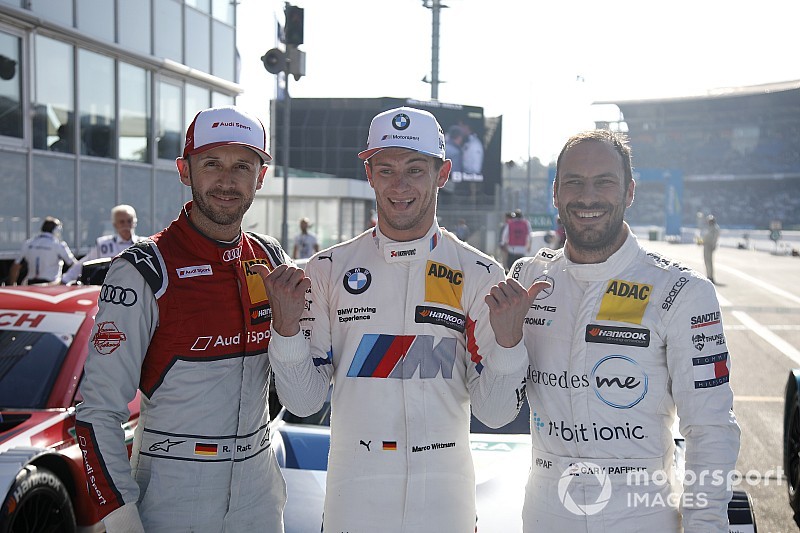 Marco Wittmann beat title rivals Rene Rast and Gary Paffett to pole position for the final DTM race of the season at Hockenheim.

Wittmann denied Rast, who had led for much of the session, in the final minute of qualifying, outpacing the Audi driver by 0.054s.

Rast is 14 points behind Paffett, meaning he will have to finish on the podium to have any hopes of the title - and, should he win, he would still need Paffett to finish outside the top four.

Paffett, fourth during the mid-session lull, was at risk of having a poor qualifying as his first attempt during the second run was deleted due to track limits.

But he fought back as the chequered flag fell to jump from ninth to third and extend his points lead over nearest rival Paul di Resta to seven.

Di Resta had a more low-key session and will have to try to take his second DTM title from 11th on the grid.

Behind the top three, BMW duo Bruno Spengler and Augusto Farfus will line up on the grid ahead of Edoardo Mortara, the only other Mercedes other than Paffett in the top 10.

Two more BMWs in Joel Eriksson and Phillip Eng followed in seventh and eighth, as Nico Muller, a pace-setter in the early stages, had to settle for ninth as the second-best Audi.

Behind the Swiss driver, Timo Glock brought the final BMW into the top 10.