The two title protagonists were fighting for second place in the early stages of the race, with van der Linde having to defend hard with 25kg of ballast aboard his Abt Sportsline Audi.

On the second lap, Lawson dived down the inside of van der Linde into Turn 6 and although the two touched as they exited the corner, the AF Corse Ferrari driver appeared to complete the move into the next right-hander.

Van der Linde immediately fought back, but tagging the rear-left end of Lawson's Ferrari under braking for Turn 8. The contact forced the Kiwi out wide, allowing van der Linde to come through and regain the position.

The Audi driver was adjudged to be responsible for the collision and handed a five-second penalty, with a second five-second penalty for not serving the initial sanction during the pitstop leaving him a disappointing 10th at the flag.

Lawson, meanwhile, went on to finish second behind Winward Mercedes driver Lucas Auer, opening up a significant 14-point lead in the standings ahead of the final round at the Norisring.

Speaking after the race, Lawson felt van der Linde simply misjudged his braking into the left hander at Turn 7, but was pleased to bag another podium in his pursuit of the drivers’ title.

“The first couple of laps were pretty frantic with Kelvin, obviously he had the weight in the car and I knew he was going to do everything to keep us behind,” said Lawson.

“In the end we got past [van der Linde] at Turn 6 and Turn 7 and I guess he misjudged the braking because he smashed into me and pushed me wide and got back past, but we were able to pass again in the pitstop.

“The guys did a really really good pitstop and from then the race pace was quite good, so happy with the result.” 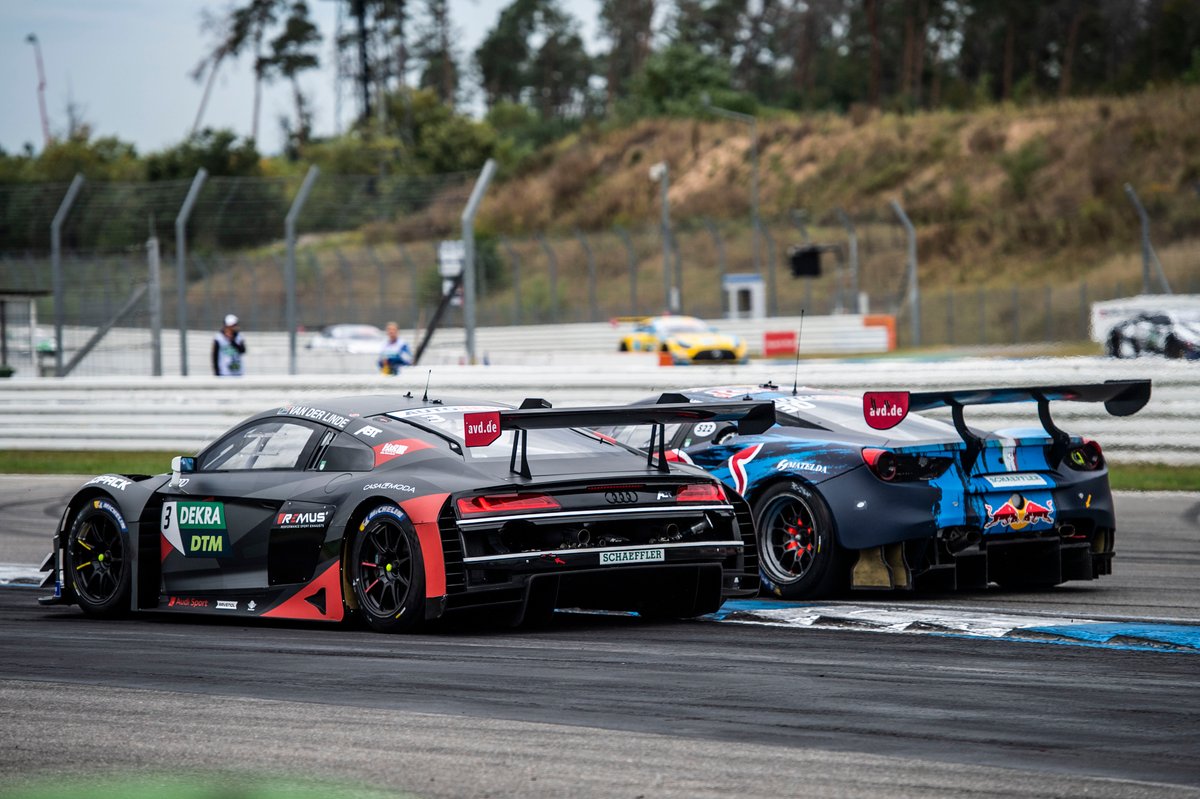 Van der Linde felt the clash between him and Lawson was a racing incident and that the Red Bull driver braked early two early going into Turn 8, the same spot where the Ferrari was previously overtaken by Mike Rockenfeller on the final lap of Saturday’s race.

"We drove side-by-side and I was in the grass with both wheels [at the exit of Turn 6]. He braked really early and okay, thank God nothing happened, he still finished second.”

“I can assure you I did not brake early,” said the 19-year-old. “I was on the inside of the track, trying to defend and obviously you're going to have to brake a little bit early than normal.

“It's funny he would say something like this because the other week he completely brake tested Alex [Albon] in a very similar situation.

“So for me I braked at a normal point, I can see him coming from my rear view camera and it was way too late. It's interesting.”

Lawson said he considers himself lucky to have made it to the chequered flag, having not realised the full extent of the damage to his Ferrari until after the race.

“It basically bent the exhaust and pointed it upwards, and it meant that it burnt a hole in the back of the car,” he explained.

“I don't know if it cost me any horsepower or anything like that, it wouldn't have been much. We were actually quite lucky to finish the race now that I've seen the car afterwards, seeing the state of the back of the car, pretty fortunate.”