Both formats will make for thrilling duels as even the slightest mistake can cost the respective driver dearly.

On 14th and 15th July, the most popular international touring-car series is back in Munich’s Olympic Stadium. And the second edition of the motor-racing spectacle in stadium atmosphere does not only feature a new track layout but also numerous innovations regarding the format, making the event even more attractive and easier to comprehend for the spectators. On Saturday, the mirrored 614-metre parallel circuit will be the venue of the battle for the manufacturers’ title, held in the relay format - and on Sunday, the drivers will have to fight in head-to-head battles for the drivers’ title. Both formats will make for thrilling duels as even the slightest mistake can cost the respective driver dearly. So, excitement is guaranteed and the DTM enthusiasts may look forward to getting the answers to many questions: who will be the best manufacturer? Will the established drivers dominate the battle for the drivers’ title or will the newcomers be able to give them a hard time? And will Bruno Spengler, now racing for DTM returnee BMW, be able to defend his title won in 2011, in the home event of the Bavarian manufacturer? 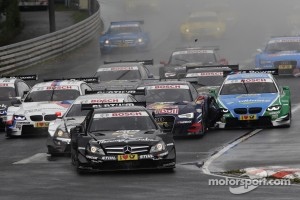 Start of race in Norisring

The team-relay format is a true motor-racing novelty: two teams per manufacturer - each comprising two drivers - battle it out with their competitors for the manufacturers’ title - in the knock-out format.

In each of the quarter finals, two teams representing two manufacturers will battle it out with one another in the relay format and in two three-lap races, with the winners making it to the semi finals.

In the semi finals, the teams have to demonstrate their assertiveness in two four-lap races - and the same applies to the fight for third place. Meanwhile, the final features four three-lap races.

The battle for the drivers’ title to be contested on Sunday

On Sunday, it is every man for himself - in the knock-out format. From round one, the drivers have to contest head-to-head battles, with only the winners advancing to the next round. Only the championship leader and the three best drivers of every manufacturer (according to the current championship standings) will have time for a short breather as they will not have to enter the competition before the round of sixteen. Those who have made it to the quarter finals will have to meet an additional challenge as making a pit stop is obligatory, from this round. Here, the teams have to make a perfect job as every 10th of a second lost or won during the pit stop could be crucial for the race result.

From round one, the Sunday action will provide the DTM enthusiasts thrilling head-to-head action. Audi’s experienced Timo Scheider will try hard to compensate for his mediocre season so far by winning his first ’title’ of the year. But to have the chance of doing so, he will have to prevail against Canada’s newcomer Robert Wickens (Mercedes-Benz). In the round of sixteen, the winner of this duel will have to battle it out with reigning DTM champion Martin Tomczyk (BMW). Former Formula 1 ace Ralf Schumacher (Mercedes-Benz) also has to solve a difficult task, in round one: His opponent in the first round is the feisty Spaniard Miguel Molina (Audi).

Due to the wild cards for the championship leader and the three best-placed drivers of every manufacturer, the drivers for two of the round of sixteen duels already are determined: David Coulthard (Mercedes-Benz) who displayed a clear upward trend at the Norisring by securing his best DTM result to date will race against Edoardo Mortara, the Munich Saturday winner in 2011. And Germany’s young hopeful Christian Vietoris (Mercedes-Benz) will have to battle it out with Augusto Farfus (BMW) who made it to the podium in his only second DTM race. In all the other duels, the DTM drivers also will give their very, very best to have a chance of winning the drivers’ title, in the end.

As usual on the regular DTM weekends, the thrilling race action in Munich also will be accompanied by a top-class entertainment programme for the entire family. The Red Bull X-Fighters will make the crowds hold their breath when flying over the ramps with their incredible jumps and stunts - and the programme also features a highlight for motor-bike fans: the Supermotos. In addition, Terry Grant and the ’Driftsensation’ also will thrill the entire family. Meanwhile, Stereolove (Saturday) and Stefanie Heinzmann (Sunday) will get the crowds in the Olympic Stadium rocking from the show stage. The open team tents as well as guided paddock tours will offer the motor-racing enthusiasts the chance of taking a glance behind the curtains and autographing sessions as well as grid girl shootings offer them the opportunity to obtain lasting memories.