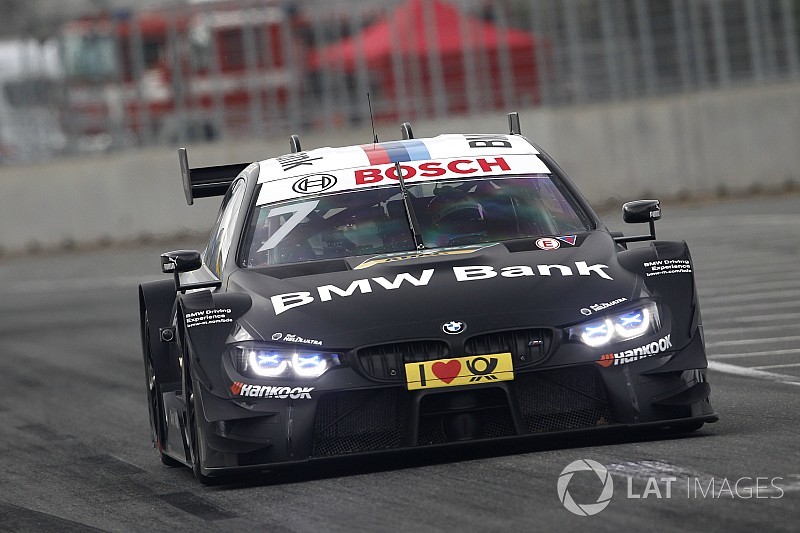 Bruno Spengler claimed BMW’s first win of the DTM season in the Norisring Saturday race as the Munich manufacturer secured five of the top six positions.

The French-Canadian driver, whose maiden DTM victory came on the Nuremberg street circuit in 2006 and who claimed a total of three wins at the track with Mercedes, claimed his first success in any DTM race for four years.

Spengler’s win was built on a cracking start that enabled him to burst through from the second row on a wet track and take the lead long before reaching the braking point for the Turn 1 hairpin.

A heavy Bavarian shower had soaked the track and the field lined up on rain tyres, but Audi’s Loic Duval was called in at the end of the first of two green-flag laps to bolt on slicks.

In a series without mandatory pitstops that might have proved a tactical masterstroke, but it served merely to flag up to the world when the crossover point was to switch to slicks.

Maxime Martin had been slow away from pole position, while Mattias Ekstrom sailed his Audi from the third row into second at Turn 1.

Martin passed Ekstrom for second into Turn 1 on the ninth lap, by which time the lead of RBM BMW teammate Spengler was already out to 5.7 seconds.

The gap was 5.5s when Martin and Ekstrom pitted together to take slicks, with Spengler coming in on the following lap.

Spengler really seemed to struggle on slicks in the damp for the first few laps, and soon enough Martin was on his tail.

As the BMWs held station at the front, Ekstrom homed in, making it a trio of cars at the helm of the race.

But Spengler found his feet within a lap or two, and began to pull away again, leaving Martin to fend off Ekstrom.

Ekstrom’s big move came with six laps remaining – he slipstreamed past Martin on the run to Turn 1, then moved over to claim the inside line, but couldn’t make the turn without understeering wide mid-corner, allowing Martin back ahead.

Ekstrom was now out of DRS, but finished the race right on Martin’s bumper and as the new championship leader, while Spengler took the flag 4.3s to the good.

Pre-race points leader Rene Rast was slow away from the front row in his Audi and held fourth before the stops, but was given a drive-through penalty for crossing the yellow pit-exit line.

Edoardo Mortara had just lost fourth place to Wittmann when his Mercedes was punted into a spin by Mike Rockenfeller, for which the Audi man earned a drive-through.

The recovering Mortara lost out in a battle for seventh with Audi’s Jamie Green, with Nico Muller (Audi) ninth and Gary Paffett pipping Merc teammate Paul di Resta and the charging Rast to the final point.

Title contender Lucas Auer and Robert Wickens were put out of the race by first-lap bumping and barging.