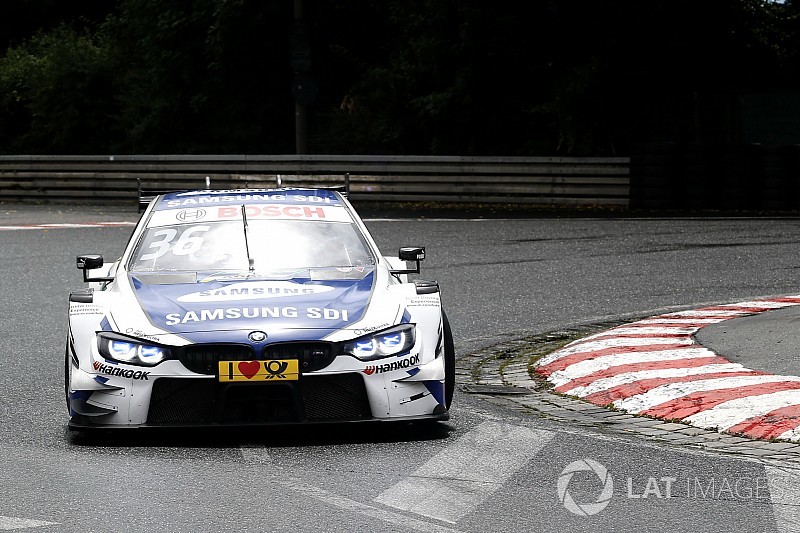 BMW’s Maxime Martin came out on top of a private battle with Lucas Auer to win a gripping second DTM race at the Norisring after a red=flag stoppage.

The pair emerged in a net first and second after an early round of pitstops had shaken out, having got their tyres up to temperature quickest.

Auer was second and ahead of Martin when the safety car was deployed after early leader Robert Wickens and Rene Rast collided on the exit of the Turn 1 hairpin, with Loic Duval heading the order by virtue of being the only driver not to have pitted.

Duval made a strong initial getaway on the side-by-side restart, but as he focused on defending from Auer he left just enough room for Martin to dive past the pair of them up the inside and take the lead.

Auer was also overtaken by Bruno Spengler but, having finally got by Duval further round the restart lap, he was promoted back to second when Spengler slowed with a puncture.

The race was then red-flagged after a hefty crash involving Mercedes driver Gary Paffett and the Audi RS5 of Mike Rockenfeller.

Paffett had attempted to overtake Jamie Green on the run to the Turn 1 hairpin, but as he tried to do so, the rear of his car became unsettled.

He was spat into the Armco barrier on the inside of the track and slid down to the first corner where he collected the Audi of Rockenfeller.

Both drivers were able to step out of their cars before being transported to hospital, but with significant debris on track and repairs required to the barrier the race was halted for some 35 minutes.

After a sighting lap behind the safety car the race resumed, with Auer making the best getaway from the single-file restart to leapfrog Martin into the first corner.

But Martin stayed within DRS range of the Mercedes man and stole back the lead at Turn 1 a handful of laps later with a bold dive up Auer’s inside.

Auer remained in tow but, despite having more DRS uses in his armoury, he was unable to retaliate and dropped back in the final laps, instead finishing 2.9 seconds shy of Martin.

The Austrian spent the final couple of tours fending off the BMW of reigning champion Marco Wittmann, holding on to second as Mattias Ekstrom and Edoardo Mortara joined the fight for the podium.

Wittmann got a better run off the hairpin on the penultimate lap and tried to take the outside line, but was forced to back off to cut back through the Scholler S.

That allowed Ekstrom, with a better run off the corner, to sneak by into third before the final hairpin.

But Wittmann hit back on the final lap, trying an ambitious move into the final hairpin that resulted only in pushing Ekstrom out wide and delaying him, with Mortara gratefully sweeping past the pair on the run off the corner and just fending off Ekstrom for third across the line.

Behind that drama, Paul di Resta had a quiet but effective run to sixth in his Mercedes C63 ahead of Augusto Farfus and Green – who finished eighth despite running out of DRS with 20 minutes of the race remaining.

Pole-sitter Tom Blomqvist plummeted through the pack at the start but recovered to ninth, ahead of fellow BMW driver Timo Glock.

UPDATE: Wittmann has been given a five-place grid penalty for the first race next time out in Moscow for his manoeuvre on Ekstrom, which earned him his third warning of the season.

Rast was also given a warning for his collision with Wickens.