One-two-three win for Audi in the DTM finale 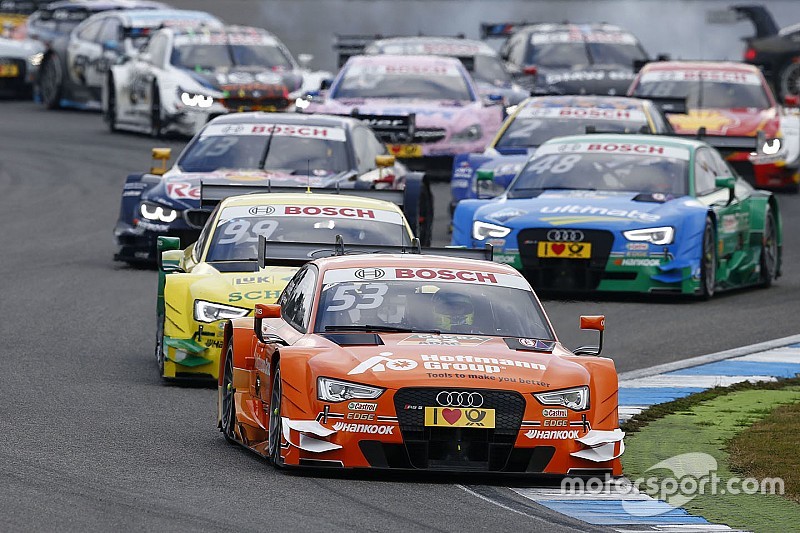 In the finale at Hockenheim, in front of 135,000 spectators (throughout the weekend), Audi won the two last races of the DTM season and on Sunday repeated last year’s one-two-three victory. On clinching his fourth success this season, the Briton Jamie Green in the Hoffmann Group Audi RS 5 DTM of Audi Sport Team Rosberg secured the runner-up’s spot in the Championship.

Ten victories in 18 races for the Audi RS 5 DTM

18 races, ten victories, 21 podiums, ten fastest race laps and eight pole positions: The Audi RS 5 DTM was the strongest car in the 2015 DTM season. Still, in the end, this tally was only enough for the brand with the four rings to take second, third and fourth place in the drivers’ classification, second place among the manufacturers, and third place in the teams’ classification. Jamie Green was 19 points short of winning the drivers’ title and the margin in the title race of the manufacturers’ classification, with 602 versus 595 points, was even smaller.

“This was a bitter-sweet ending of the season for us,” said Dieter Gass, Head of DTM at Audi Sport. “The fans got to see an impressive performance of the Audi RS 5 DTM and a superb one-two-three win once more. In spite of a difficult starting base, the manufacturers’ title was within our reach today, but we let it slip away. It was aggravating that we incurred two drive-through penalties.”

The first one was imposed on Nico Müller (Audi Financial Services Audi RS 5 DTM) for a pit stop violation (‘unsafe release’). On lap 16, there was a collision between Christian Vietoris (Mercedes) and the two Audi drivers Miguel Molina (Teufel Audi RS 5 DTM) and Adrien Tambay (Playboy Audi RS 5 DTM), which meant the end of the race for Tambay, who had been running in position four in the early stage. “That I was punished for this mystifies me,” Molina said, wondering about the penalty.

Jamie Green was oblivious to all of this. The Briton overtook pole setter Gary Paffett as early as on lap four and controlled the pace at the front in commanding style. “It’s a shame that we suffered so much misfortune this year,” said the new championship runner-up in the DTM, who won four races, but finished nine out of the points as well. “My Audi RS 5 DTM was extremely strong this year. Driving it was a real pleasure.”

Mattias Ekström (Red Bull Audi RS 5 DTM) and Edoardo Mortara (Castrol EDGE Audi RS 5 DTM) in positions two and three perfected Audi’s one-two-three result in the finale. Ekström dropped to fourth place at the start, but on the first few laps snatched the BMW of Maxime Martin and the Mercedes of Gary Paffett. In second place, the Swede secured third place in the drivers’ classification.

Edoardo Mortara battled his way forward from position 13 on the grid to third place. Unlike most of the other drivers, the Italian pitted late to change tires – exactly the right strategy for him.