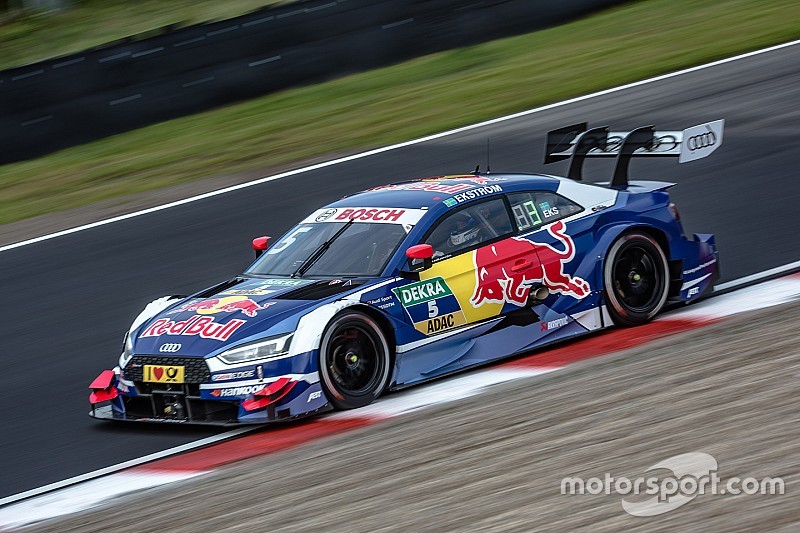 Mercedes driver Gary Paffett has hit out at Audi rival Mattias Ekstrom for what he saw as “out of order” brake-testing in the Sunday DTM race at Zandvoort.

The Swede struggled for pace badly after his early-race pitstop and was soon backing up a train of cars as he tried to cope with what appeared to be tyre problems.

With fellow Audi driver Nico Muller behind him, he managed to hold station in fourth, taking the chequered flag almost a minute behind race winner Marco Wittmann to leave Zandvoort as DTM points leader.

But Paffett, who finished close behind Ekstrom and Muller in sixth, believes the Swede's tactics on the final lap crossed a line.

“Most of the race I was sat behind Muller, he was defending Mattias' back the whole race so he was slowing down in Turn 2 and 3 on purpose to try and back me up,” Paffett told Motorsport.com.

“I tried a couple of times to pass but they were a bit quicker on the straight, he was going quickly in the right place, so made it very difficult for me to pass him.

“And then right at the end the last couple of laps, Eki was really slow. He went into Turn 1 pretty tight, pretty slow and Muller followed him. And I went round the outside of Muller, I had already done it to [BMW driver Augusto] Farfus that race and I knew it could work, so I went around the outside of Nico, got past him.

“Coming out of Turn 1 I was right behind Eki and then he lifted on the straight to allow Nico to get back alongside me.

“And then we went side by side around Turn 2 again, me and Nico, and then immediately out of Turn 2, Mattias braked again, really hard, to let Nico get alongside him and for him to get back in front of me. So... completely out of order.”

Paffett went on to say that brake-testing a rival was “not how professionals behave”.

“Effectively brake-testing twice, and brake-testing is definitely not part of racing, that's really a negative view to show to people," he added.

“That's now hot professionals behave - we race wheel to wheel, we race hard, but you don't brake-test people and that's exactly what he did today, twice.”

Mercedes DTM team boss Ulrich Fritz said the situation still needed to be evaluated further, but added: “As far as I heard, they [the Audis] braked during the straights, and it was just difficult, I have to say, and dangerous. If this is the case, I think it's not acceptable.”

Asked if he believed the stewards would take action, he told Motorsport.com: “I don't know if they will have a look at it but if they have a look at it and there's evidence on the data, I don't know what the measurements can be - but I think we shouldn't accept it because it's just dangerous.”

From Audi's side, Muller conceded that he was defending Ekstrom for much of the race, telling Motorsport.com: “I guess that's the only sensible thing to do, I had a rough start to the year and my chances personally are quite slim. I did what I could to at least help the team and him.”

He argued, meanwhile, that there was nothing untoward about the last-lap battle.

“We were side by side for a few corners and I think it was fair and square racing, nobody got pushed off the track, there was no contact," he continued.

“I think we entertained the crowd quite well - for me it was just how it should be.”