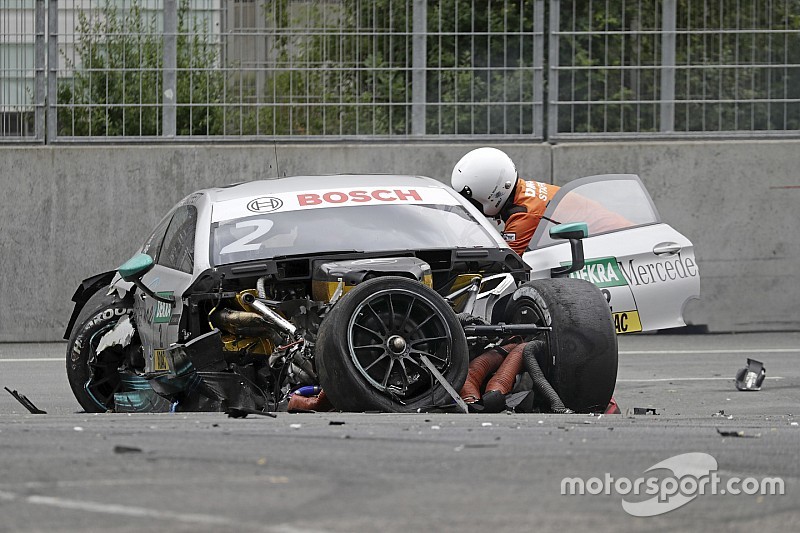 Both Paffett and Audi driver Rockenfeller were taken to hospital following the collision, which occurred after Paffett lost control of his Mercedes C63 while trying to pass Jamie Green’s Audi along the start/finish straight.

Paffett hit the inside wall and slid into the drivers’ side door of Rockenfeller’s car at barely abated speed at the Turn 1 hairpin, causing the race to be red-flagged.

Later it was confirmed that Rockenfeller had sustained a broken metatarsal bone in his left foot as a result of the crash, while Paffett suffered a bruised rib but was otherwise unharmed.

"I'm fine, I sustained a few bruises but all in all I'm okay,” Paffett told German TV network ARD. “After this massive crash that's a good outcome.

“The X-ray pictures didn't show any injuries. I bruised a rib, that's it. The doctors were surprised when I told them about how fast we were going when the accident happened.

“They were surprised to find me basically without injuries. So yes, I was pretty lucky."

Recalling the incident itself, the British driver added: “The crash just seemed as if it never wanted to end. It went on and on and on.

“When it was done, I had to remain still for about a minute to collect my thoughts and to listen to my body, to see whether I was okay. It could have been a nasty outcome."

For his part, Rockenfeller reckoned he was “unlucky” to have sustained a foot injury in the crash, but recognised the situation "could have been worse" given the nature of the impact.

"I turned in and then I was hit hard,” the German driver recalled. “It was a nasty one. I hadn't expected it, it's always worse if you are not prepared [for the impact].

“The clutch pedal hit my foot, which was unlucky. I immediately knew something was hurting but you're under shock, too. I got out of the car and pulled off the shoe. I walked a bit and realised it's not perfect.

“Over at the hospital they performed an X-ray and we saw the midfoot was broken. It's a pity and it could be better, but it could be worse, too.”

Rockenfeller added he was unsure whether he would be able to race at the next DTM round at Moscow in three weeks’ time.

"I want to compete at Moscow, otherwise my [title chances] are over,” he said. “We will have to see. Now we wait for two or three days to see the swelling lessen.

“Luckily you don't need your left foot too much in the car, only at the start. If all goes according to plan we find a solution. But it's difficult to say at the moment.”