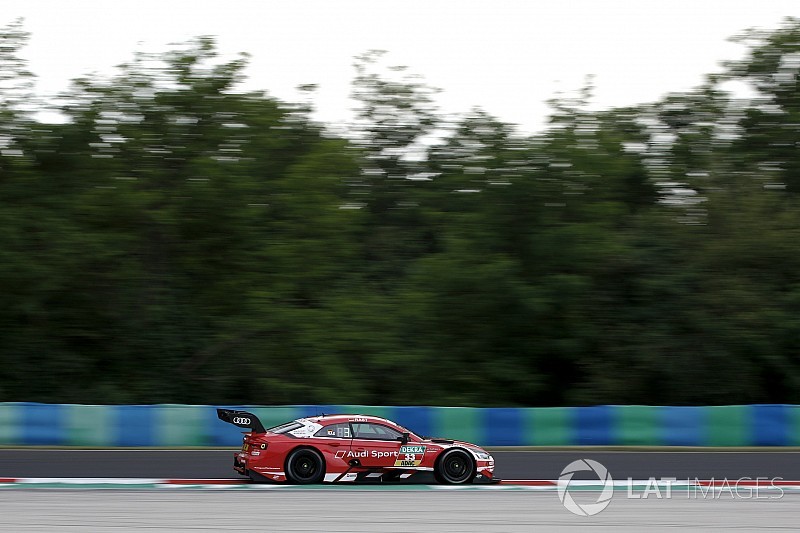 Rene Rast is "afraid" Audi's resurgence in form at the Hungaroring DTM round is more related to the track, and that it could go back to struggling in following rounds.

Audi has lost its aerodynamic edge over Mercedes and BMW as the 2018-spec DTM cars produce 30 percent less downforce than their predecessors.

With the exception of Mike Rockenfeller's second place on Sunday at Hockenheim, Audi has failed to finish in the top five in the first four races of the year.

On Saturday at the Hungaroring, Audi showed improved form as five of its drivers scored points with Nico Muller standing on the podium in third.

However, Rast, who took fourth close behind Muller, said it's still unclear whether the strong race was down to a step forward from Audi, or the track suiting the car.

Audi was the dominant manufacturer at the Hungaroring last year, and also won both races in 2016.

"We'll see in two or three weeks when we are in Norisring [whether we made a step forward]," Rast told Motorsport.com. "We don't know yet, we've been strong here in the last couple of years.

"We followed a certain set-up philosophy and looks like it is working here.

"We don't know if it is also working on other tracks because we haven't done a lot different things on the set-up, compared to Lausitzring, so we are afraid that maybe we go back to where we were in Lausitzring for Norisring."

Muller, who scored his first points of the season with the podium, reckons Audi "made a small step".

"I think we did make a small step," said the Swiss driver. "We tried to really adapt to the characteristic of the Hungaroring and really put a lot of effort into reading what the track needs in order to unlock the full potential of our car.

"We scored good points as a whole teeam today which is positive and nice to see. Tomorrow is a new day, we know how quickly things can go in DTM and we will try to make a small step forward."

Due to the low-key start to the season, the top Audi driver in the standings is Rene Rast in 10th, 57 points behind championship leader Gary Paffett.

When asked if aiming for the title is still viable, Rast said Audi is not yet quick enough for that goal: "Good question. If we have good race tomorrow and gain some points back...

"But I think in relative we're still missing a bit of pace on other tracks."