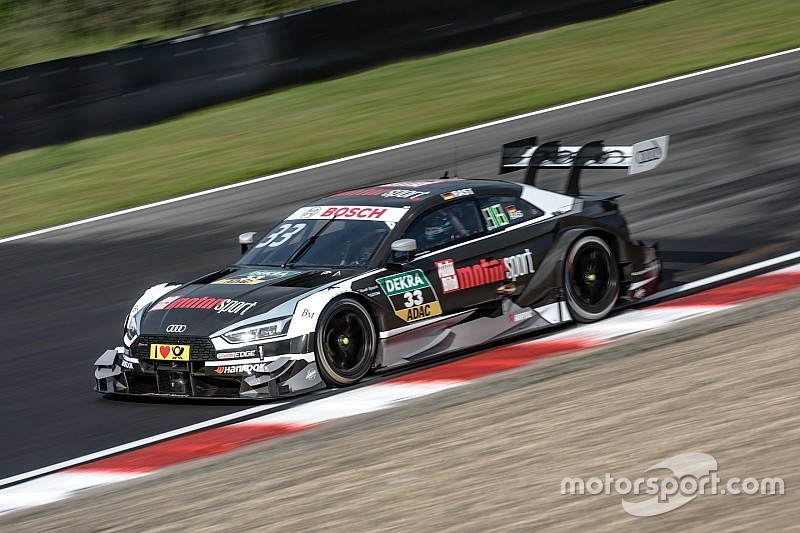 DTM points leader Rene Rast was left frustrated at what he believes was deliberate blocking by BMW driver Augusto Farfus in the opening part of Saturday’s Zandvoort race.

Starting from fifth on the grid behind four BMW drivers, Rast held his position in the early laps but found himself bottled up behind Farfus as the top three – Timo Glock, Marco Wittmann and Maxime Martin – escaped out front.

While the majority of the field, including Farfus, took their pitstops within the first 10 laps, Rast opted to stay out until lap 18 before changing tyres, losing net positions as a result.

Stuck behind Paul di Resta’s Mercedes for much of the latter half of the race, Rast ultimately slipped behind Gary Paffett to finish ninth – albeit taking the lead of the championship as a result of Audi stablemate Mattias Ekstrom not finishing.

“They had a clever strategy,” Rast told Motorsport.com. “Three cars getting away and Augusto holding up the field.

“I was stuck behind him, everyone behind pitted and overtook me virtually. By the time we saw that it was too late to pit me, so I stayed out, so I lost lots of time.

“Augusto drove so slowly for the first three or four laps, I said ‘we need to pit now’. They showed me the pitboard, but that lap Augusto suddenly went two seconds quicker.

“Then I said, ‘he’s picked up the pace, if you still want me to pit, show me the pitboard’. And there was no pitboard, so I stayed out.

“Obviously I was quicker after the stop, closed up to the guys in front, but to pass is a different story, especially as being stuck in traffic destroys your tyres.”

Asked if he felt BMW had asked Farfus to slow to hold up the rest of the field, Audi motorsport boss Dieter Gass would only say: “Everyone has their own eyes.”

Gass’s counterpart at BMW Jens Marquardt however denied any wrongdoing on Farfus’s part when asked by Motorsport.com whether the Brazilian was being a spoiler.

“They all got off the line pretty well, Augusto didn’t get the best of starts, and then we had to manage our pace with the tyres and this he did,” Marquardt said.

“He had to manage his race, the other guys could do a quicker pace, and you could also see overtaking is really difficult here.”

Rast was also pessimistic about his chances of beating the BMWs in Sunday’s second race, especially with Audi set to gain weight from its race pace on Saturday.