Rene Rast says his lead of the DTM championship meant he opted not to take "crazy risks" to defeat Marco Wittmann in the hope of winning the wet Assen opener.

Rast qualified on the front row alongside polesitter Wittmann and, once the safety car race start had cleared, the Audi driver hounded Wittmann through the opening corners and the pair ran side-by-side after the De Strubben hairpin.

A safety car caused by Daniel Juncadella moments later paused the battle, with Wittmann able to gradually pull away from Rast late on.

Rast and Wittmann agreed that the Audi driver's bid was helped by his manufacturer's ability to switch the cold tyres on quicker than the BMW, which tends to find tyre performance later in a stint.

The battle was decided when Rast's stablemate Nico Muller used a long-running opening stint to jump both Wittmann and Rast, with the BMW driver then able to pass Muller for victory when the Swiss driver struggled on cold tyres.

Rast said: "[In] my position as the leader, you cannot take crazy risks, Marco will agree to that. He knows it.

"I was trying to go past but for me, in the end, the points were more important than the victory and I didn't want to do stupid things, so I kept it on the Tarmac and tried to be safe.

"I tried to pass him, but there was no safe away around him. I stuck to the plan."

"[The] Audis were somehow able to switch on the tyres better - especially in the early stages where Rene put the pressure on me - and in the first sector, he was quite strong," said Wittmann.

"We were side-by-side into Turn 6 and 7 and it was nice to have the battle. If you have a guy like Rene who plays fair, leaves enough room, and fights wheel-by-wheel, it's always good fun.

"In the end, I could stay in front and when my time came where I switched [on] the tyres, I could open a little gap."

Rast believed Muller had taken a risky strategy by extending the first stint, as a safety car could have cost him any chance of victory as he would not have completed his mandatory pitstop.

But Muller and his Abt Audi crew made it work and Rast was shown on the world feed raising his hand when Muller returned to the track in front of him.

Asked about the gesture and if there were any instructions from the team, Rast joked: "I was saying hello - 'hi Nico!' "

He continued: "No, [there were no instructions], at that time Nico came out of the pits on cold tyres and I was on fresh tyres and quicker.

"I hoped I could get past him quicker. I lost some time behind him and Marco was gone, it was the only reason for why I waved to him.

"He was on fresher tyres so he pulled away from me a lap later." 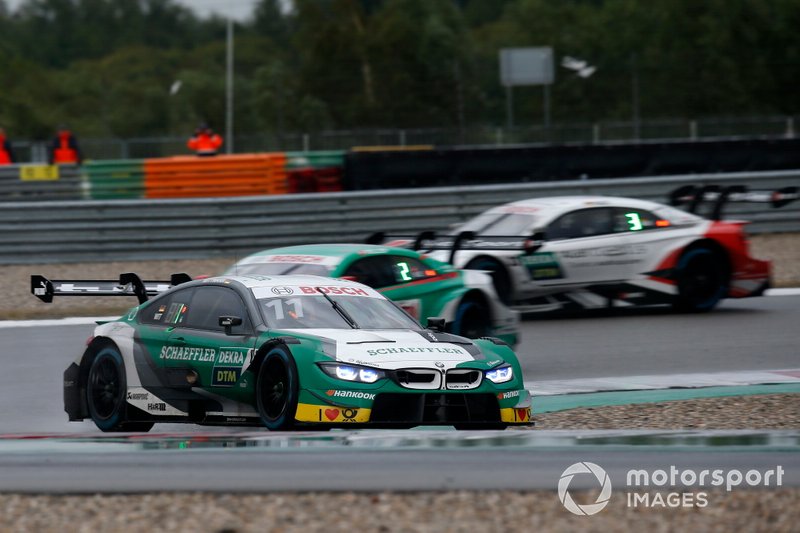