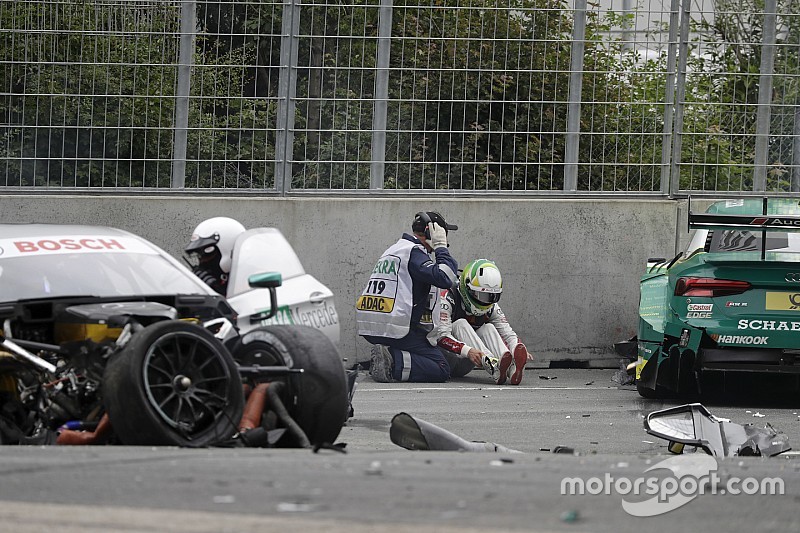 DTM drivers Mike Rockenfeller and Gary Paffett have been taken to hospital after the pair were involved in a hefty shunt in the Sunday race at the Norisring.

Rockenfeller was collected by the Mercedes C63 of Paffett shortly after a restart period, with the crash causing the race to be red-flagged.

As Paffett attempted to overtake Jamie Green, the Audi man moved to the left on the run to the Turn 1 hairpin with Paffett on his inside.

It was not clear if Green and Paffett made contact, but Paffett’s rear became unstable as he reacted to the move and that spat his car into the inside wall.

Now a passenger, Paffett slid along the inside line down to the hairpin and collected Mike Rockenfeller, slamming into the Audi’s driver-side door.

Both drivers were able to step out of the cars before being taken to the medical centre, with Mercedes reporting Paffett had complained about a pain in his arm and Rockenfeller avoiding putting any weight on his left foot.

Audi later communicated Rockenfeller had sustained a "small fracture of the fifth metatarsal bone [in] his left foot".

Paffett said: "It was a nasty crash but I'm fine. I'm sorry Rocky got involved and hurt in this incident. I hope he'll be fine again soon.

"I'm feeling a bit sore but apart from a few bruises I'm fine and will be back fighting in Moscow.

"I want to especially thank the medical response team at the track and in the hospital. We got first class treatment."

Green said he thought he had held position from Paffett and was surprised to see his car arriving backwards at Turn 1.

“Gary tried to overtake me at the last corner at the end of the previous lap,” said Green. “We were sort of side-by-side coming onto the straight. I had the DRS open so I pulled slightly ahead.

“When we got to Turn 1 I tried to defend and stay in front and I thought that was fine, I thought it was done, and then just as I was about to turn in he arrived backwards obviously out of control and Rocky was turning in.

“Gary was a passenger at that point. I need to see the TV coverage really to understand why he lost control.”