After winning Saturday's opening race at the Kent track, Wittmann could managed only a 10th-place finish in the second race, after gambling on an unorthodox two-stop strategy.

It came after Audi drivers locked out the top eight places on the grid in second qualifying, which unlike Saturday's session took place on a fully dry track.

Wittmann had climbed from 12th on the grid to sixth when he pitted for a second time under a slow zone, but he was unable to make up the ground he lost in the remaining laps.

Up front, Rast took his fourth win of the season from pole, despite briefly losing the lead to Audi stablemate Loic Duval at the start, while Muller climbed from sixth to second in the first two laps and stayed there for the remainder of the race.

“There was not much to do, really,” Wittmann told Motorsport.com. “You could see they played all the games they needed, they could cover any strategy which we were aiming for.

“We had a good opening lap, going from P12 to P8, at one stage we were running in P6 so that was probably more or less the maximum we could have achieved.

“In the slow zone we tried a different strategy, at the end it didn’t work out. It was [worth] a try.”

He added: “If you have eight Audis in front, it’s pretty easy for them to cover me, who is their biggest [challenger] in the championship. It was pretty clear what they are doing.

“They brought up Rene and Nico very easily, very quickly. Pretty clear what they did.”

“They had such a huge performance that we never saw before,” he said. “Being strong with all eight cars and having a one-second gap to the best BMW is quite massive, we were surprised.

“I can’t do more. We squeezed out the maximum at Assen and [on Saturday], then we see how it continues, where we end up. If you have a race like today, you are somehow sacrificed.”

Wittmann remains BMW's top challenger in the standings, 18 points ahead of Philipp Eng, but he has fallen 59 points behind Rast and 22 behind Muller.

Asked if he feels BMW needs to get behind his title bid more decisively in the remaining three rounds of the season, Wittmann replied: “I cannot comment. I only can do always my best and trying to achieve the best result. The rest is not in my hands.”

Audi motorsport boss Dieter Gass said the Ingolstadt's marque qualifying advantage over BMW on Sunday was something that it hadn't foreseen.

Gass recalled: "Qualifying was bizarre today because I was looking at the timing screens after the first runs [thinking], ‘Wow, what’s going on here?’.

"I was sceptical about the situation, ‘Are they saving tyres? What’s going on?’ I expected an attack [from BMW] in the second run, which didn’t happen.

"I think Marco didn’t have the best of laps like yesterday, others like Philipp improved their time compared to yesterday. We just had a very good qualifying, everybody had good laps." 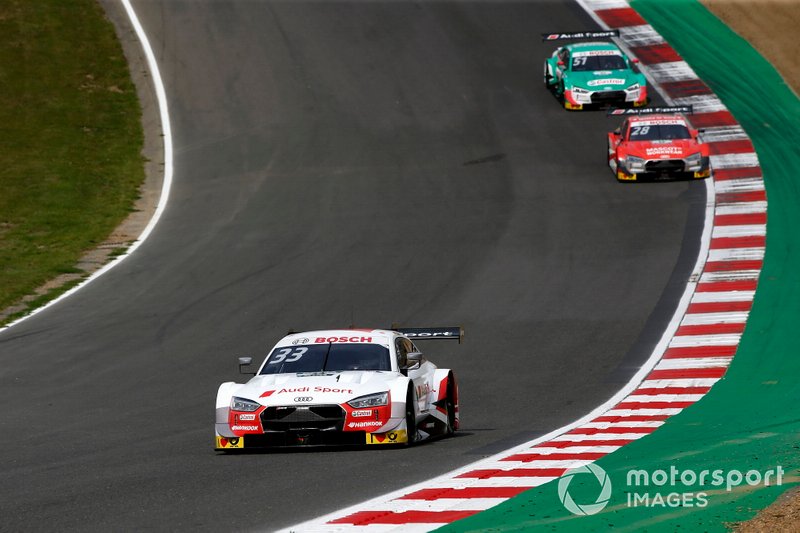