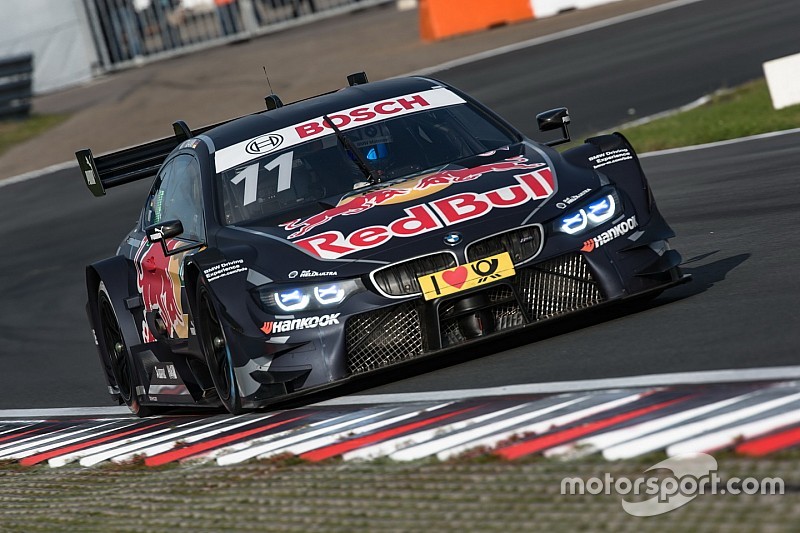 With its M4 entering Sunday as the lightest car on the grid by 10kg, BMW locked out the top three spots on the grid – but the Bavarian marque's 1-2-3 was disrupted right away as Maxime Martin bogged down badly at the start.

Ahead of him, poleman Augusto Farfus was passed down the inside of Turn 1 by Wittmann, with Audi's Jamie Green also attempting to get past but staying put in third.

Further into the opening lap, Green went off-track while chasing Farfus, giving up position to Rockenfeller – who took second when Farfus dived into the pits, kicking off a wave of early stops.

While most of the field changed their tyres early, Wittmann was content to run up front and set the pace, leaving his stop until lap 12, with Rockenfeller coming in a lap later.

More than three seconds adrift of Wittmann after the stop, Rockenfeller began to gradually close the gap – and, much to the ire of Wittmann, he got a helping hand from fellow Audi driver Loic Duval.

The last driver on track to stop, Duval held up Wittmann on lap 26 before taking to the pits, with Rockenfeller using the opportunity to close right up to the reigning champion.

As a result, Wittmann had to weather attacks from Rockenfeller for several laps, but the Audi driver used up almost all of his DRS without coming close enough to make a move – and finally finished eighth tenths behind Wittmann.

Despite having left his stop very late, Duval rejoined third after stopping, right ahead of Mattias Ekstrom, and soon began to lap up to four seconds quicker than the Swede, whose Audi was desperately struggling for pace.

As such, the Frenchman was left free to take his maiden DTM podium, having not scored any points in the previous 11 races of the season.

Ekstrom dropped to 40 seconds behind Duval as he tiptoed around the track in the final 10 laps, but he held on to fourth regardless.

This was largely due to the efforts of fellow Audi driver Muller, who ran behind the Swede and defended his position - an approach dubbed as “ridiculous” by Gary Paffett, who finished as the top Mercedes in sixth.

A recovering Martin was seventh, heading fellow BMW drivers Timo Glock (who had been excluded from qualifying) and Farfus.

After his early stop, the Brazilian was involved in Turn 1 contact with Mercedes driver Lucas Auer, whose race was eventually undone by a puncture.

Audi's erstwhile points leader Rene Rast had a miserable race, as he was first slow off the line behind Martin and then retired as a result of contact.

Despite his slow start, a relatively late stop put Rast in podium contention – but as he emerged on cold tyres, he collided with the Mercedes of Maro Engel on exit of the hairpin-like Turn 4.

Rast's suspension snapped in the collision, while Engel carried on, only for a puncture to force him to make an extra stop.

Another notable Audi/Mercedes clash involved Green and Robert Wickens, the former spinning but recovering to 10th and the latter suffering a puncture.

In the standings, Ekstrom has retaken the lead on 125 points, with Wittmann moving up to second on 118 and Rast shuffled down to third on 114.

Auer remains Mercedes' highest-placed driver, but he is now only seventh, with 99 points to his name.