After months of preparation and a two-day test at the Paul Ricard circuit, teams are finally ready to start the 2013 European endurance season.

In one week’s time the home of British motorsport will play host to the first round of the European Le Mans Series and a superb grid of 25 cars will be on duty for the 3 Hours of Silverstone.

After months of preparation and a two-day test at the Paul Ricard circuit, teams are finally ready to start the 2013 European endurance season. With almost as many prototypes as GTs, ELMS races promise some exciting battles and rivalries at every level of competition. 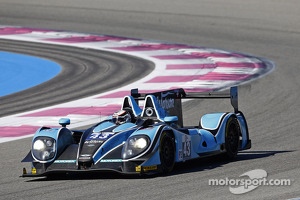 In LMP2, the series’ premier class, 2012 title holder Thiriet by TDS Racing puts its ORECA 03-Nissan in the hands of French and Swiss drivers, Pierre Thiriet and Jonathan Hirschi, who fully intend to fight to retain their title.

Among the nine prototypes in the LMP2 class the presence of ORECA- 03 chassis from Murphy Prototypes (Brendon Hartley/Mark Patterson) Boutsen Ginion Racing (Bastien Brière/Thomas Dagoneau/John Hartshorne) or Race Performance (Michel Frey/Patric Niederhauser) can also be counted upon to challenge.

Greaves Motorsport, having achieved a podium at the 12 Hours of Sebring, is in great shape for its endurance season and puts its Zytek Z11 SN prototype in the hands of Americans Chris Dyson and Michael Marsal to play in the major league, while Luxembourg team DKR Engineering runs two Frenchmen, Olivier Porta and Romain Brandela in its Lola B11/40 Judd.

Following an outstanding performance during ELMS pre-season testing at Paul Ricard, French driver Franck Mailleux was signed up and is delighted to run alongside the only woman on track in the ELMS, Natacha Gachnang: "I am extremely grateful to the Morand Racing team for having given me the opportunity to test at Paul Ricard and show my abilities in a competitive environment.

I am pleased to join the team for the first ELMS race at Silverstone and I will do my best to use my four years of top level endurance experience to achieve the best result for the team."

Three ORECA FLM09 cars in the LMPC class complete the list of prototypes for the starting grid of the 3 Hours of Silverstone. The Endurance Challenge Team confirmed its six drivers during the pre-season tests: youngsters Paul Loup Chatin and Gary Hirsch will both make their endurance debut at the wheel of the No.49 entry, while Soheil Ayari will be alongside GT driver Anthony Pons in No.48. Andorran Alex Loan and teammate Matthew Lecuyer from France, both rookies, finished testing full of confidence and are eager to start at the wheel of their No.47 LMPC prototype.

LMGTE has eight cars representing six teams and two manufacturers who all have the same goal in mind: to win the class and score points from the first race of the season onwards.

The two Ferrari 458 Italias entered by Ram Racing – No.52 (Johnny Mowlem/Matt Griffin) and No.53 (Gunnar Jeannette/Frankie Montecalvo) – will be battling against two other F458s from AF Corse, driven by Yannick Mallegol, Jean Marc Bachelier and Howard Blank (No.54) and the Italian trio of Piergiuseppe Perazzini/Marco Cioci and Federico Leo (No 55). The sixth car from the Prancing Horse marque will be entered by JMW Motorsport (No.66).

Three Porsche 911 GT3 RSRs and three teams of note will also be challenging for victory in LMGTE. IMSA Performance Matmut, which by the way has also entered this year’s World Championship, has put its faith in the French-German partnership of Patrice Milesi and Wolf Henzler in the No.67.

As for Prospeed Competition, the French trio of François Perrodo, Emmanuel Collard and Sebastien Crubilé will be trying to place the No.75 at the top of the rankings.

Finally Proton Competition, formerly known as Team Felbermayr-Proton, competes with the No. 77 which will be driven by the multi-national trio of German Christian Ried, Italian Gianluca Roda and the British Porsche factory driver, Nick Tandy.

The new-for-2013 category created by the ACO for the ELMS has so far answered the hopes of teams and drivers. Five cars and four different marques, all FIA GT3 homologated, will take the start of the 3 Hours of Silverstone in the GTC class.

AF Corse, which has entries in two categories in the FIA WEC, plays the diversity card once again and, as well as its two entries in LMGTE, it adds a Ferrari 458 Italia GT3 in GTC.

The car will be driven by an Italian trio - Andrea Rizzoli, Stefano Gai and Lorenzo Casé. Autorlando Sport is truly "multi-national", signing up five drivers of different nationalities for its two Porsche 911 GT3s.

The No.64 brings Greece into the mix with Dimitris Deverikos who will be alongside Archie Hamilton (GBR) and Gianluca Carboni (ITA) while the team’s second RSR, No.84, will be driven by Venezuelan Emilio Di Guida and Dutchman Jeroen Bleekemolen.

Two other German manufacturers will do more than their fair share to join the battle for victory, with the No.65 Audi R8 LMS of the MOMO Megatron DF1 team in the hands of Swiss Raffi Bader and Belgian Dylan Derdaele, and the only BMW Z4 on track from British team Ecurie Ecosse driven by young Britons Ollie Millroy, Andrew Smith and Alastair McCaig.

56 drivers, 19 teams and 14 different nationalities, nine manufacturers, 7 engine suppliers and two tyre companies (Michelin and Dunlop) will therefore be on the grid for the 3 Hours of Silverstone, the first round of the 2013 ELMS on 13 April.

The kick off will be at 09:00 hrs (local time) on Friday 12th for the first free practice session at Silverstone. This big endurance meeting will also be run in conjunction with the opening round of the FIA ​​World Endurance Championship and the second race of the FIA ​​European F3 series. The 3 Hours of Silverstone will take place on Saturday, 13 April at 15:00 hrs (local time).