A first win for the new ORECA 05 with Thiriet by TDS Racing ! 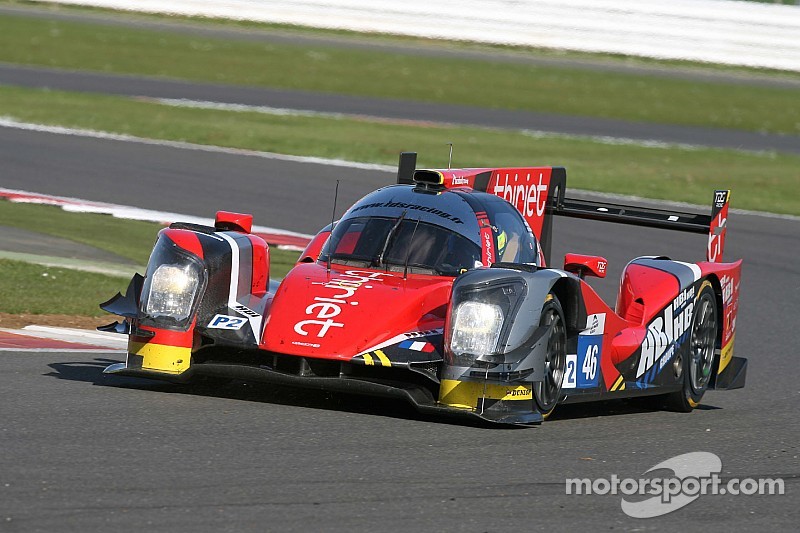 Murphy Prototypes gave a One-Two to the ORECA chassis.

Only one month since the brand new ORECA 05 LM P2 raced for the first time and here is its first win ! Indeed, Thiriet by TDS won the 4 Hours of Imola, European Le Mans Series’s second round, with style. Pierre Thiriet, Ludovic Badey and Tristan Gommendy delivered a perfect performance and were the first ones to cross the finish line following on a race marked by many battles. Murphy Prototypes gave a One-Two to the ORECA chassis. The Irish team’s ORECA 03R arrived second after a great performance by Mark Patterson, Michael Lyons and Nathanaël Berthon.

The first success is always a very special moment…

Already a competitive contender at the championship’s opening weekend in Silverstone, Thiriet by TDS Racing finally just missed out on a win there, having led the race up until the last five minutes before the chequered flag. After granting the ORECA 03’s first success in May 2011, Xavier Combet and Jacques Morello’s crew has now repeated the same with the ORECA 05. After having dominated the free practice sessions, but then being delayed in the qualifying because of going out into the gravel, the Thiriet/Badey/Gommendy trio managed to catch up superbly from the ninth place, also posting the fastest lap on the way.

“It’s a fantastic first win, only over two months after our first roll out” says ORECA President Hugues de Chaunac. “The ORECA 05 has very quickly become a competitive car and naturally possesses a strong potential. It was important, before Le Mans, to demonstrate that performance and reliability. It’s been the case since the beginning of motorsport. Just like a baby’s first steps, the first success is a very special moment. Congratulations to Thiriet by TDS Racing which is amongst the best LM P2 teams, today’s performance simply proves it.

Despite starting within the pack, the three drivers perfectly managed their race. Congratulations to Murphy Prototypes too ! They showed that the ORECA 03R is still there. It’s a relentless team and I’m very happy for Greg Murphy who is so passionate. Finally, congratulations to all members of ORECA Technology who’ve worked on the ORECA 05 project. It’s a great first reward.”

“Imola was an important meeting and I’m happy to see that the team has followed its plan” explains Thiriet by TDS Racing’s Director Xavier Combet. “Le Mans remains Le Mans, but we’re going to try to keep that momentum. This weekend was almost perfect, with the best lap time of the free practice sessions, the win and the fastest lap during the race. Tristan made a little mistake in the qualifying, but those things happen. We’ve stayed focused on the race and our three drivers were perfect. The way Pierre managed to come back was amazing, he drove very intelligently.

He keeps on surprising us. We expected Ludovic to do as well and so did he. Tristan deepened the gap and negotiated the end of the race well. The drivers appreciated the car which also demonstrated reliability. I think that the ORECA 05 has left an excellent impression. We had started the ORECA 03’s series of wins. Now history is repeating again as we’re doing the same with the ORECA 05 and we’re delighted!”

“I’m very pleased to be on the podium and happy for the team” says Nathanaël Berthon, having realized a remarkable double stint again with the ORECA 03R. “After what happened in Silverstone, it was important for us to show that we’re there. It’s a good thing for everybody. Personally, I was careful with tyres during my first stint. It was a good pace and I’ve tried to put pressure on the second car, driving even faster despite old tyres. My teammates did a great job, just like the team in general. Mark was nervous before the race started but he resisted the other drivers very well. Michael also completed two great stints. It’s raising our confidence before Le Mans. The ORECA 03R is still very competitive!”

On the first row of the starting grid, the ORECA 03R/Murphy Prototypes made a good start. Behind the wheel Mark Patterson resisted the pack and maintained himself in second position. After having gone out of the track during the qualifying sessions, which actually didn’t have any consequences, Thiriet by TDS Racing’s ORECA 05 made a fantastic start. Lap after lap, Pierre Thiriet overtook his opponents and progressively came back to the fourth place before the end of the first fifteen minutes.

He then reached the third position during the 10th lap, and was second just a couple of minutes later! After the safety car came out, half an hour in, Pierre kept the same pace up until the first pit-stop. Ludovic Badey completed a solid double stint and managed to take the lead halfway into the race which was interrupted again for another ten minutes. Thanks to Mark Patterson’s and Michael Lyons’s great performances, Murphy Prototypes was also in the Top 5.

1h30 before the end of the race, Tristan Gommendy sat on board of the ORECA 05. At the lead again after his opponents’ refueling, he deepened the gap, from one second to over fifteen. Now in the ORECA 03R’s seat Nathnaël Berthon attacked too and moved forward from the fourth to the third place just before entering the last 60 minutes.

The French driver even reached the second row, behind Gommendy, after the very last pit-stops. Both drivers going at a fast pace, nobody would manage to catch up with them. Thiriet by TDS Racing’s ORECA 05 crossed the finish line first just in front of Murphy Prototypes’s ORECA 03R. Also racing with ORECA chassis, Ibanez Racing and Eurasia Motorsport finished sixth and seventh respectively.