Already on the second step of the podium in Imola, Nelson Panciatici reoffended on the Red Bull Ring circuit in Austria. This result puts the Signatech-Alpine team in second place in the overall standings of the European Le Mans Series (ELMS) Championship. 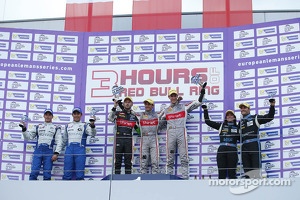 The weekend’s Austrian challenge had started well for Nelson Panciatici with a pole position achieved in the qualifiers. Unfortunately, Nelson saw all his times withdrawn by the Race Directors for not respecting a yellow flag, vision isn’t always perfect when chasing for pole and in the last lap too!

Relegated to 8th place on the starting grid, the Alpine A450 driven by Nelson Panciatici and his co-driver, Pierre Ragues, never stopped fighting back up the ranks to finally cross the finishing line in second place, 21 short seconds behind the winners, which makes it all the more frustrating:

Nelson: "Starting last in LMP2 made our task a lot harder and certainly deprived us of a victory but we respect the decision of the stewards even if we found the ruling a bit harsh. The qualifying session was going perfectly well with several times that could have put us in pole position or on the first line.

After an average practice, Olivier, our engineer, knew how to pull out all the stops to give us a well-balanced and very efficient car. Starting last and finishing second is really quite an excellent result. It is a credit to the whole team.

I tried to drive really fast when the track was clear. It’s a lot harder in traffic. We were able to score some big points and the championship isn’t over yet. We will have to show we mean business after the holidays. Bring on the next race!”

“The team did an excellent job,” underlined, Signatech Alpine's Team Principal Philippe Sinault. “The Alpine A450 was competitive from the start of the weekend and Nelson was particularly strong in qualifying. It was tough to see us stripped of our times after he posted the fastest lap of the session under yellow flags.

Pierre Ragues started from eighth on the grid before handing over to Nelson Panciatici who produced a good run in difficult conditions. They both had to push hard to move up the order despite the traffic. A traction-related problem didn't make overtaking easy for them.

The team's pit work was perfect throughout the race and coming second is almost like a win after we started from eighth place. We still have some hard work to do to prepare for the end of the season but we will be targeting victory when we go to Hungary in September.”

The next meeting for the Signatech-Nissan team and its drivers is set for September 13 and 14 on the Hungaroring circuit in Hungary, they will have to aim for victory to stay in the match!