The gorgeous colours of the Aston Martin's wearing Gulf liveries will be entered into a ELMS race near you.

Although Hall and Campbell-Walter finished the season as WEC GTE-Am Driver Champions, Goethe found it hard to meet the commitment needed to race in a world programme and this year decided a European championship would be more achievable.

“It’s exciting to be contesting the full season of ELMS,” comments Goethe. “It was disappointing last year that I had to miss a few rounds of the WEC because of business commitments so I decided that this year I wanted to do a championship that would see me at every round.

“I look forward to racing alongside Dan for the first time and I’m pleased to have signed Stuart again.” 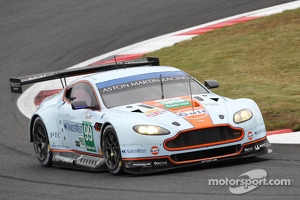 Hall met Goethe in 2009, when he raced the Aston Martin DBR1-2 LMP1 at Le Mans and the pair first raced together in 2012 at the Dubai 24 Hours. They went on to form a strong relationship and Hall has been instrumental in Goethe’s development into a top gentleman driver.

Although Goethe would have welcomed Campbell-Walter back into the team, his platinum-standard race license meant he couldn’t compete alongside gold-standard Hall in the ELMS championship.

“With my grading being raised to a gold-level, we needed to find a silver driver to join the team this year,” comments Hall. “Dan [Brown] has shown great talent in recent seasons in the British GT Championship and the Blancpain Endurance Series so we got him along for a test and he did a great job. He’ll be a superb addition to the team.”

Brown, who challenged 2013 British GT Championship-winner Andrew Howard for the title right up until the final round, has raced karts since 12-years old and has developed into a well-respected GT driver with numerous GT3 race wins to his name. This will be his first step into GTE racing and believes that ELMS is a great stepping-stone into the WEC. 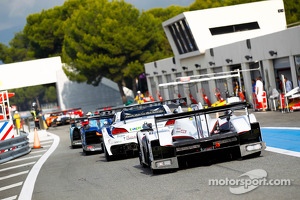 “There is a big step-up from GT3s to GTEs,” comments Brown. “GT3s are incredible machines to drive but the Vantage GTE is something else. It has very few driver-aids and it’s great for my development for me to be racing a full programme in one. The ELMS is the perfect place for me to do this and I hope it will see me on the right path towards the WEC.

“Stuart and Roald are a great pairing and I look forward to being part of the Gulf Racing team – I hope we can continue the car’s success from last year.”

The Gulf Racing Vantage GTE not only helped Hall and Campbell-Walter to take the 2013 GTE-Am drivers’ championship but it finished every race in the WEC season, including 24 Hours of Le Mans, without any major issues.

“The Vantage GTE has been very successful for our works team so we are looking forward to seeing it being run as a customer car,” comments Andrew Williamson, Customer Programmes Manager at Aston Martin Racing. “Of the last twelve WEC six-hour races, a Vantage GTE has been on the podium every time with a class win at six of last year’s seven races. Gulf Racing is a very experienced team and the car has a strong driver line-up so we’re predicting a great season for them.”

The team will test the Vantage GTE at the official ELMS test at Paul Ricard today (1 April). The 2014 European Le Mans Series starts at Silverstone on 19 April.

Chandhok: Why charming F1 boss Williams will be dearly missed