Legendary Scottish motor racing outfit Ecurie Ecosse powered by Black Bull travelled to France’s Paul Ricard circuit for the final round of the European Le Mans Series last weekend (September 27/28) looking to maximise their points haul in both the drivers’ and teams’ standings. 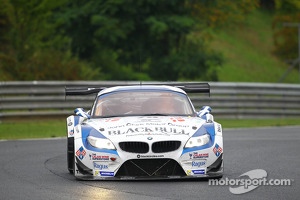 The squad’s Barwell Motorsport-run BMW Z4 GT3 had its last competitive outing at the Hungaroring during round four of the pan-European endurance championship where it suffered a non-finish after being taken out of the race by a GTE-class Ferrari.

With a strong result essential to their title hopes, regular Ecosse drivers Ollie Millroy and Andrew Smith were joined for the French event by experienced GT racer Phil Quaife. Friday’s pair of one-hour official practice sessions were spent trying to find an optimum set-up for the car and allowing Quaife to acclimatise to the front-engined BMW, which he had not previously turned a lap in.

Championship regulations dictate that the 2013-specification Z4 GT3 must carry 110kg of extra ballast over its standard minimum weight. Given the car’s low torque relative to its rivals and the resulting lack of straight-line speed, the team would have to use everything in its armoury to ensure a competitive run, especially with no chicanes being used on Paul Ricard’s extremely long Mistral Straight. Indeed, the Z4 was losing two seconds per lap to the more powerful Ferraris, whose maximum speed there was some 20kmh higher.

Having made set-up changes following free practice Quaife and Millroy shared Saturday morning’s 20-minute qualifying session by completing three and two laps respectively. Millroy posted the team’s fastest effort on his second flying lap with a 1m58.944s, though it was clearly impossible to compete with the power of the Ferraris which locked out the top five spots in the GTC class and the top four in GTE. As such Ecosse had to settle for seventh on the grid, albeit 1.3 seconds quicker than the rival Z4 of DKR Engineering.

Smith began Saturday’s three-hour race and made good early progress, passing the GTC Lamborghini of Nico Pronk and some of the faster GTE cars on his way to fifth spot, before handing over to Quaife at the 45-minute mark. Following a faultless pit stop by the Barwell Motorsport crew Quaife went on to complete a further 45-minute stint before handing over to Millroy in fourth position at half race distance.

Millroy’s first 50-minute stint would be completed on fresh tyres and a full tank. He quickly moved into third place in the GTC class and, with 30 minutes remaining, pitted to take on a small amount of extra fuel so as to continue until the end. However this allowed the fourth-placed Scuderia Villorba Corse Ferrari to close to within 25 seconds of the Z4. With the Italian car catching at two seconds per lap Millroy was powerless to resist as the Ferrari cruised past on the Mistral Straight, denying Ecosse their fourth podium of the season.

The team left the French circuit on Saturday evening delighted to have produced such strong showings in the highly competitive GTC class this season, and looking forward to challenging for outright British GT Championship glory during the final round at Donington Park on October 5/6 with Oliver Bryant and Marco Attard at the wheel.

Ollie Millroy: “This was another very strong performance from the whole team and to finish third in the European Le Mans Series drivers’ championship this early in my GT racing career is something I'm very proud of. The Barwell Motorsport-prepared Ecurie Ecosse BMW Z4 GT3 has run perfectly all season, so I would like to thank everyone involved in making that happen. They’ve all fought extremely hard against some tough opposition.”

Andrew Smith: “We were always going to have a difficult time at Paul Ricard as the circuit is not suited at all to the Z4 and the extra 40kg of GTC ballast on top of the 70kg additional balance of performance weight affects the car a lot more than its rivals. The whole team did an outstanding job and we gave the very best that we could. It was a pleasure sharing the car with Ollie and Phil, and I have to thank them both together with Alasdair, Joe, and the entire Barwell team, for helping us secure such a great result in a very competitive championship.”

Phil Quaife: “It was good to experience the BMW Z4 this weekend with Barwell Motorsport and Ecurie Ecosse. We put up a good fight right until the chequered flag but it was always going to be a tough race to win. However the team and my co-drivers did an awesome job resulting in us finishing fourth, and I'm pleased to have helped Olli, Andrew and the team secure their third-places in both the Drivers' and Teams' Championships.”

Mark Lemmer, Barwell Motorsport Team Principal : “It was always going to be tough to win the title after SMP Racing entered their Ferrari with what was essentially a fully-Pro driver line-up, but we took the fight down to the wire. Fantastic stints from Ollie, Andrew and new boy Phil saw another really strong performance this weekend from our BMW Z4 GT3. I look forward to collecting our third-place trophy in Paris this December with pride.”

Le Castellet: AF Corse is silver in the championship