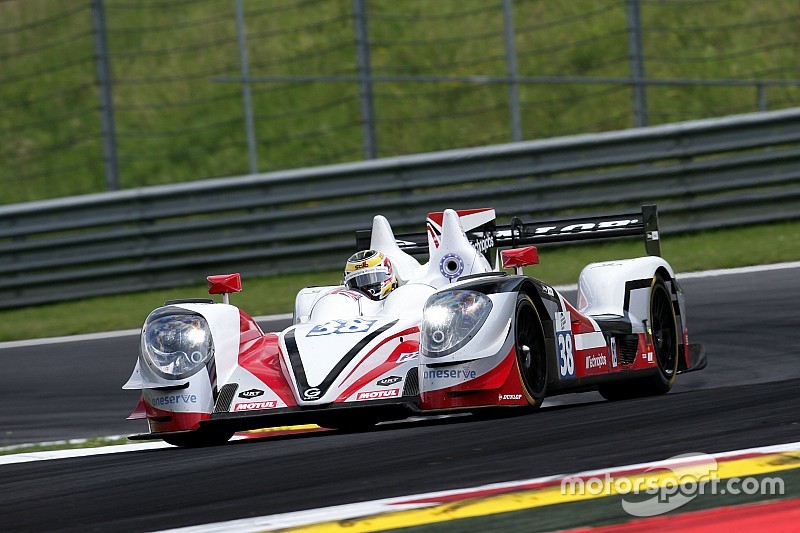 JOTA Sport must adopt a maximum attack approach in the fifth and final round of this year’s European Le Mans Series at Estoril on Sunday (18 Oct). A dramatic post-race penalty in the previous race denied JOTA a second successive win and slashed what would have been a healthy 18-point lead to just a single point. With 26pts available, Simon Dolan, Filipe Albuquerque and Harry Tincknell will have the pedal to the metal for the entire four hours.

The trio have posted podium finishes in all four races so far this year featuring one win (Red Bull Ring) plus second (Silverstone) and third (Imola and Paul Ricard) placings. Meanwhile their Gibson 015S-Nissan has started all four races from the front row – including three pole-positions – and set two fastest race laps.

Estoril is where I’ve been looking forward to most on the ELMS calendar.

An unfortunate software glitch caused the team to breach the 90mins maximum driving time by less than two minutes turning celebrations in to commiserations after its “win” at Paul Ricard last month. A somewhat harsh time penalty of 45secs was awarded, hours after the post-race celebrations, for an innocent error that resulted in no gain or benefit to the leading and ultimately winning JOTA Gibson. The JOTA camp are nevertheless rejuvenated by this setback in its quest to win its first ELMS title.

Having contested the championship since the first race at Paul Ricard in 2012, the British team has finished 10th (2012), third (2013) and second (2014) in the series. Last year, despite achieving first, second, third and fourth place race finishes plus four “pole” positions, JOTA agonisingly missed out on the Series “crown” by just four-points.

While brake issues around the 13-corner, 2.6-mile Estoril circuit near Lisbon, handicapped the then Zytek named LM P2 sportscar in last year’s corresponding race resulting in a third place from pole-position, this year’s rebranded and updated Gibson chassis has shown stunning speed and impeccable reliability so far this season. Two 90min Free Practice sessions are staged on Saturday (1030 & 1500). The following day features qualifying (0930) and the Four Hours of Estoril (1300).

“Estoril is a very strong track for the Gibson, and as a track Estoril takes some beating. We will be absolutely flat out for the win to ensure we bring home the championship - nothing is going to stop us this year!”

“I can’t wait to go to Estoril and to have this great championship finalé. The track suits us very well. To be racing in front of my ‘home’ crowd is always special. I will use all of my experience that I have learnt with JOTA Sport and Audi Sport to stay focused and give it my best. A race win would earn me the ELMS title in my own country and that would be a dream. JOTA has great momentum in the team and us drivers. Nearing the end of a second season together, we really know each other well. Personally, I have the feeling that we ‘won’ the previous race even if that is not the reality. The Estoril track is very tricky to overtake on and there is no room for mistakes without getting punished.”

“The aim has to be to stand on the top step of the podium and I really believe this is possible. We’ll be pushing for the pole-position and another race win. Estoril is where I’ve been looking forward to most on the ELMS calendar. It should be a really strong track for the Gibson. The car ran well there in 2014 and we finished on the podium despite a few incidents in the race. I qualified on ‘pole’ by half a second last year and I just love Estoril’s track characteristics.”

Sam Hignett. Partner, JOTA Group: “It’s very, very simple. JOTA Sport is going to Estoril to win the race and in doing so claim the Drivers’ and Teams’ European Le Mans Series titles. We finished third in last year’s corresponding race which resulted in missing out on the championship by four-points. Our Gibson has been totally rebuilt after taking the chequered flag first in the last race at Paul Ricard. Having ultimately been ‘denied’ that ‘win’, the three drivers and all team members are hungry and determined to successfully close out this year’s title.”