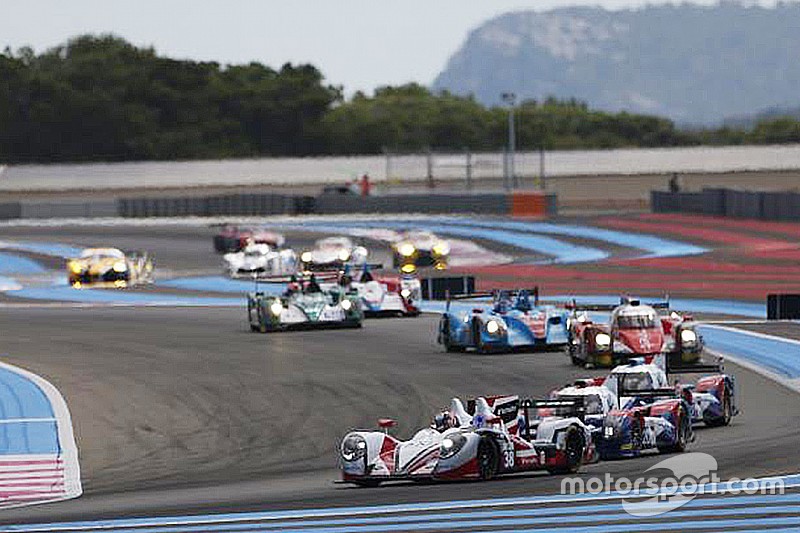 The ELMS finale at Estoril this weekend is likely to be a straight fight between the two Gibson-Nissan LMP2 cars of title protagonists JOTA Sport and Greaves Motorsport.

The pair are separated by just a point after JOTA's win on the road at Paul Ricard was subsequently changed to third place, after a penalty was dished out to the team for allowing Filipe Albuquerque to overrun his allotted time at the wheel.

This ensured that JOTA's initial 18-point lead in the title standings was reduced to just one as the teams head to Portugal this weekend.

But JOTA driver Simon Dolan is confident heading in to the finale.

"We probably won't approach the race any differently to whether we are 18 or one point ahead in all honesty," Dolan told Motorsport.com.

"We're in a pretty good place and they [Greaves] will have to work bloody hard to beat us. Estoril has always been a great circuit for us and it suits our chassis package well. We are quietly confident we can do it."

Greaves Motorsport driver Gary Hirsch, however, believes that he and teammates Jon Lancaster and Bjorn Wirdheim have the necessary team dynamic to take full advantage of JOTA's penalty in France last month.

"We are very happy to be able to be fighting for the title," Hirsch told Motorsport.com.

"We will put everything on the table to maximise our chances. We are actually pretty relaxed and don't feel any pressure because nobody was expecting us to have a chance immediately after Ricard."

Hirsch, a silver categorised driver, knows that his input will be crucial this weekend, just as Dolan's will be at JOTA Sport.

"Estoril can be tricky with the weather, especially wind and rain coming in from the sea," said Hirsch.

"We want to take advantage of any situation so we must practice and practice on every level, so everything is ready for us to be there when it counts.

"Of course, in some situations the silver (categorised) driver makes a difference. I think we have the best line-up on the grid, so it will be a big positive for us this weekend."

Also with an outside chance of title glory is the French Thiriet by TDS squad, which has replaced Tristan Gommendy with Nicolas Lapierre this weekend, believing the former Toyota driver will bring valuable set-up secrets from his time racing with the KCMG ORECA 05 in the WEC.

Lapierre was part of the winning LMP2 squad – along with Matt Howson and Richard Bradley – at Le Mans in June.

Thiriet by TDS sit 10 points behind Greaves and 11 behind JOTA and the French's squad's chances of stealing the crown are slim, but far from impossible.

But the Achilles' heel of the Thiriet by TDS team has been reliability so far this season, highlighted by several issues at Paul Ricard last time out.

Still, if Lapierre does indeed bring a fresh impetus on the set-up side, and Thiriet does have an advantage, then a pole and maximum score for the French would mean that JOTA and Greaves would need to finish second to take the title.

However, even a fight for second is no guarantee as, with both SMP Racing BR01 entries showing increased pace at Paul Ricard, they could also trouble the British teams.

There is a set of circumstances that could see all three protagonists on the same points. If Greaves takes pole position, and along with JOTA, fails to finish, and then a fifth place by Thiriet would see all three teams on 76 points.

The title would then go to Greaves by dint of having won two races as opposed to JOTA and TDS' one, meaning that JOTA's error at Paul Ricard would have effectively lost it he title.

However, more likely is a straight battle between Greaves and JOTA, both of whom have tested pre-season at the Portuguese venue and proved to be pacey.

The rivalry between the two Gibson 015S runners is intense, but mutual respect flows between them. However, it has spilled over once before, at the Silverstone opener in April, and it would only need a small spark in the tinderbox of a title fight for it to flare up again.

That day at Silverstone, Tincknell and Lancaster went toe-to-toe in the final hour and between them put on a riveting display of no-holds-barred LMP2 racing.

There was contact and controversy then, but it is hoped that this Sunday will see the gloves stay on, and a suitably spectacular end to another enthralling ELMS season take centre stage.