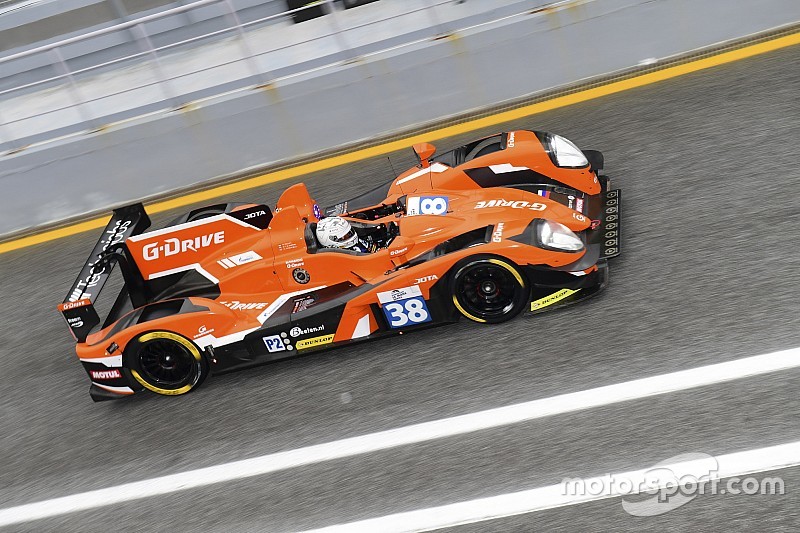 With a healthy 14-point lead in hand, the #46 Oreca 05 duo of Pierre Thiriet and Mathias Beche - along with Ryo Hirakawa - arrived to the final round as the firm favourites to win the championship.

And the duo looked en route to clinch the title until Thiriet made a scheduled second stop after 1h30m of racing.

While the driver change went according to plan, Hirakawa couldn't get the car started as an electrical problem occurred.

The Oreca 05 was wheeled back to the garage and the subsequent repair job ruled the entry out of contention.

At the front, G-Drive had a faultless run with Dolan taking over the lead from the #21 DragonSpeed soon after the first round of pitstops.

The #38 Gibson 015S went on to take an unchallenged win - and in the process secured the title.

Behind, DragonSpeed secured the second spot on the podium after a charging drive by Nicolas Lapierre in the final stint.

The #21 Oreca 05 fell to fifth after the second stint before Lapierre remarkably recovered positions in the final 90 minutes of the race.

The #32 SMP Racing finished in third place after a close battle with Krohn Racing.

The #33 Eurasia Motorsport entry completed the top five, while Thiriet by TDS Racing finished ninth in class after returning to track in the final hour.

The #18 M.Racing - YMR, driven by Alexandre Cougnaud, Yann Ehrlacher and Thomas Laurent took their maiden LMP3 win, despite a late spin that nearly resulted in the team's retirement.

The #3 United Autosports finished second, having started from the front row of the grid, ahead of the lead #9 Graff Racing entry.

The #2 United Autosports, which wrapped up the title at Spa-Francorchamps last month, finished a lowly 11th after a fluffed race.

In the GTE class, the #99 Aston Martin trio of Andrew Howard, Alex MacDowall and Darren Turner took the championship honours after winning the final race of the season.

The #56 AT Racing entry finished second, ahead of the two AF Corse Ferraris.

The #66 JMW Motorsport entry, which had a 20-point lead going into the final round, retired from the race with a gearbox problem.

The Ferrari 458 Italia briefly came out on track, but Robert Smith was unable to change gears. To add to its misery, Michael Guasch lost control of his #2 United Autosports LMP3 car, hitting the Ferrari and inflicting the race’s sole safety car period.