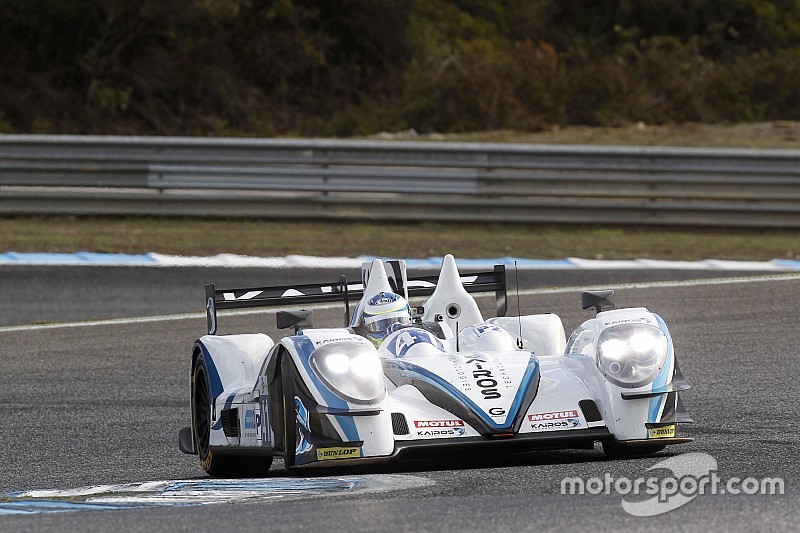 Thiriet by TDS Racing took the race win in the European Le Mans Series (ELMS) season finale, but it was Greaves Motorsport who emerged as the champions.

Jota, Greaves and Thiriet by TDS Racing battled it out for the 2015 LMP2 championship and had to deal with constantly changing weather conditions throughout the four-hour showdown to end the ELMS season.

When the chequered flag flew, it was the Thiriet Oreca victorious with drivers Nicolas Lapierre, Ludovic Badey and Pierre Thiriet, the Greaves Motorsport Gibson and the No. 21 AF Racing BR01 rounding out the podium.

When it came down to the title, it was close with Greaves scoring 93 total points, Thiriet with 91 and heartbreak for the pole-sitting Jota Gibson, the team that entered this race with the points lead in hand - finishing fourth and ending the year with 89 points.

In the secondary prototype class, the No. 2 Team LNT Ginetta earned their first win of the year while the sister car took home the championship with a third-place result. The No. 9 Graff Racing Ligier finished second.

The Marc VDS Racing team went out on top after the news that the team would cease operations at the end of this year, winning in the GTE class and coming just four points short of the crown. The title went the way of the No. 60 Formula Racing Ferrari, who finished fifth. The No. 99 Aston Martin Racing Vantage and No. 86 Gulf Racing UK Porsche filled out the podium.

The race was frantic from the start with Tracy Krohn spinning in the first corner along with the No. 9 Graff Racing Ginetta and No. 29 Algarve Pro Racing Ligier.

Less than 15 minutes into the race, more contact erupted towards the front of the field when Bjorn Wirdheim and Maurizio Mediani had a coming together over third place. Mediani was sent spinning but quickly recovered.

The first full-course yellow was needed when Simon Dolan got himself stuck in the gravel. A quick but heavy rain shower then hit the circuit, causing the leaders of both LMP2 (Jota) and GTC (TF Sport) to spin. Many darted down the pit lane but a brave few stayed out on slicks as the skies cleared.

The Greaves Motorsport team led the way as halfway neared until being overtaken by AF Racing. The No. 21's control of the race was short-lived, however, due to an off road excursion as the rain returned for a second go.

Later in the race, drama struck the class-leading JMW Motorsport Ferrari. On James Calado's out-lap, he slowed with gear issues that took the team out of contention. The third and final full-course yellow was issued when the Massive Motorsport GTC entry was stranded on the race track.

From then on, Thiriet was in control of the race, holding a comfortable margin of nearly a full lap in the final hour. Things tightened up when Nicolas Lapierre was forced down pit road for his fourth and final pit stop, but the No. 46 was still able to stay out front, crossing the finish line a full minute and 15 seconds ahead of the new champions.

Greaves Motorsports title hopes were nearly jeopardised when the team was forced to serve a stop-and-go following a pit stop investigation by the stewards, but Jon Lancaster maintained blistering pace and was able to keep the machine in the runner-up spot.