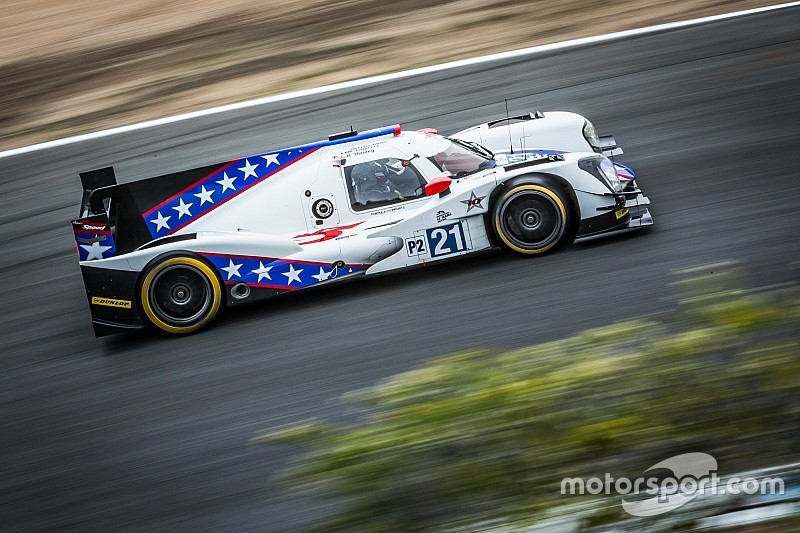 The #21 Dragonspeed crew of Nicolas Lapierre, Ben Hanley and Henrik Hedman will start the 4 Hours of Estoril from pole position after Lapierre made a late improvement on a damp, but drying track.

Lapierre, who led the #21 Oreca 05 to victory at Spa, was one of the last few drivers to take the chequered flag, lapping the Estoril circuit in 1m44.146s.

Behind, Paul-Loup Chatin qualified the #23 Panis Barthez Competition Ligier in second place, having held provisional pole for majority of the session.

Championship leaders Thiriet by TDS Racing’s fortunes failed to improve, with Mathias Beche qualifying a lowly seventh during a fluffy session for the #46 Oreca 05.

However, the Thiriet by TDS squad only needs a fourth place finish in Sunday's race to guarantee the title.

The #2 United Autosports crew, which wrapped up the title in Spa last month, took pole in the LMP3 class, with Alex Brundle setting a best time of 1m52.156s in the Ligier JS P3.

Wayne Boyd made it a one-two for United Autosports, ahead of the two Duqueine Engineering entries, the #19 car leading the charge for the French outfit.

In the GTE class, Ben Barker piloted the #88 Proton Racing to pole position, while the championship-leading #66 JMW Motorsport could qualify no higher than fifth.

Meanwhile, the #56 AT Racing secured the second spot on the GTE grid, with Alessandro Pier Guidi lapping 0.337s off the pace of the leading Porsche.

Further back, the two AF Corse entries were third and fourth, the #51 car qualifying ahead of the sister #55 machine.