In the championship, Joël Camathias and Andrea Bertolini gain one position and are now third, and still on the race for the title.

Joel Camathias and team mate Andrea Bertolini have obtained at the Red Bull Ring the podium finish that escaped them shortly at Silverstone and Imola. 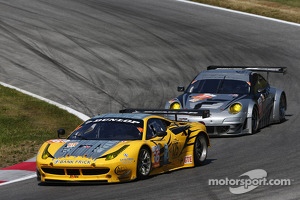 The Swiss and the Italian finished second in the third round of the European Le Mans Series after a convincing race that saw them always the front-runners since the practice sessions.

The satisfaction for the excellent result is accompanied by a hint of regret as a minor technical issue of fuel pick-up on the JMW Motorsport Ferrari F458 prevented a probable win.

In the championship, Camathias and Bertolini gain one position and are now third, and still on the race for the title. The next ELMS round will take place after the summer break, on 13-14 September at the Hungaroring.

Joël Camathias: “We are clearly very happy with this result and we are finally on the podium, but as on the previous races, we could have hoped something more. The car and the team are very competitive, and Andrea and I constitute a good pair. We qualified second and I took the start, taking and keeping the lead for a long while, despite the fact we were on a low consumption strategy.

Unfortunately, towards the end of my stint, there was this problem of pick-up of the last fuel litres in the tank. The engine even switched off and I had to do my last lap at a very low pace, losing around 50 seconds. Later, everything went well and we could catch up a bit but when you see that the final gap is 30 second, you realize that we could or should have won. This said, we are very happy and motivated to do even better in the last two rounds.”

Stevens starting to “prove himself” with Le Mans Am win