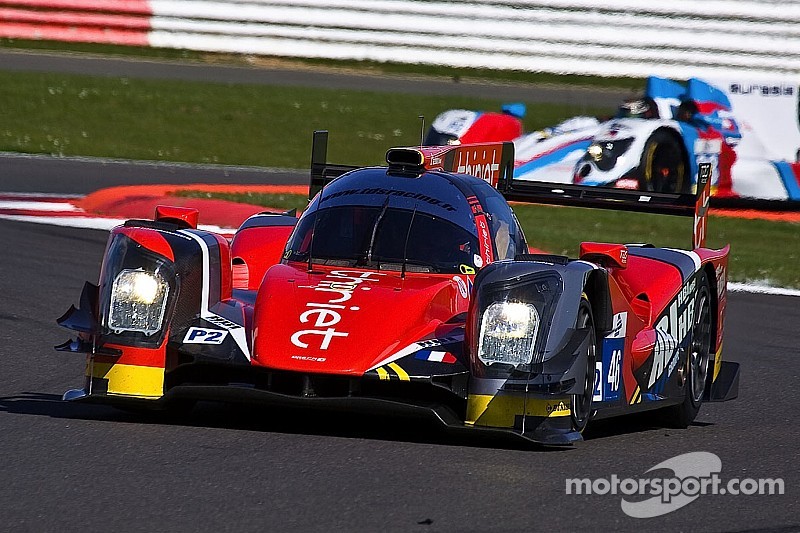 The first Free Practice session of the weekend in Italy was interrupted by two red flags as rain presented the drivers with some tricky driving conditions.

The first interruption came early on in the 90-minute session when the GTC class no68 Massive Motorsport Aston Martin driven by Kristian Poulsen went off at turn 3, causing a Full Course Yellow (FCY) to be declared.

The second FCY was declared at 45 minutes into the session when the LMP3 class no15 SVK by Speed Factory Ginetta-Nissan of Jesus Fuster went off at T15 but this was changed to a red flag when the car was considered to be in a dangerous position.

The session was extended by 15 minutes to compensate for the stoppage but another red flag was declared when there was contact between the no11 Lanan Racing Ginetta and no48 Murphy Prototypes Oreca-Nissan at T15, meaning debris had to be cleared from the track.  The session went green again with 30 minutes remaining on the clock and the rain starting to fall again.

As the chequered flag fell it was the no46 Thiriet by TDS Racing Oreca 05-Nissan that was at the top of the timing sheets with Pierre Thiriet setting a 1m41.531 lap of the 4.9km Imola circuit.

The championship leading Greaves Motorsport Gibson-Nissan of Jon Lancaster was just 0.082 seconds slower with a 1m41.613 lap, with the no29 Pegasus Racing Morgan of Julien Schell setting the third fastest time, a further 1.4 seconds behind the Gibson Nissan.

The first non LMP2 runner was the AF Corse run GTC Class Ferrari of Marco Cioci in 10th overall, with a 1m48.938 lap, nearly two seconds faster than the quickest LMGTE class car, the no56 AT Racing Ferrari 458 of Alessandro Pier Guidi in 12th overall.

The two Team LNT run Ginetta-Nissans headed the LMP3 class, with Charlie Robertson leading the way with a 1m54.670 lap.

A dry track for the second 90-minute Free Practice session saw the lap times reduced. The session was only interrupted by a short Full Course Yellow when the no68Massive Motorsport Aston Martin Vantage stopped at T7 and the session was neutralised to allow the marshals to recover the stricken car safely.

At the end of the 90-minutes it was the Thiriet by TDS Racing Oreca-Nissan that was once again taking the top spot with a 1m35.181 lap set by Tristan Gommendy, six seconds faster than this morning’s best time and 0.875 seconds quicker than the second fastest car in the session, the no38 JOTA Sport Gibson-Nissan of Filipe Albuquerque.

In LMP3 the two Team LNT Ginetta-Nissans were leading the way once again with the no3 Ginetta of Charlie Robertson setting a 1m43.593 lap just 0.012s ahead of the no2 Ginetta of Michael Simpson.

The LMGTE and GTC categories were headed by a Ferrari. In LMGTE it was the Formula Racing Ferrari 458 of Mikkel Mac with a 1m42.300 lap, 0.5 seconds ahead of the Team BMW MarcVDS Z4 of Andy Priaulx, while the no62 AF Corse Ferrari 458 was quickest in GTC with Rino Mastronardi setting a 1m44.637 lap, just 0.068s ahead of Marco Cioci’s no63 AF Corse Ferrari.

Qualifying for the 4 Hours of Imola will begin with the LMGTE and GTC classes at 10h00 tomorrow morning, followed at 10h30 by the 20 minute session for the LMP2 and LMP3 classes.

Krohn Racing ready for Imola and ELMS round two