The six Team Endurance Challenge drivers took advantage of the ELMS Official Test to actively prepare the first round at Silverstone. 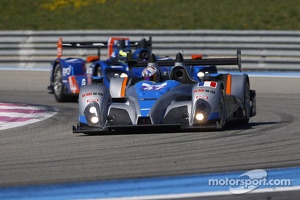 Two weeks from the European Le Mans Series season debut, the Official Test at the Paul Ricard circuit had an air of dress rehearsal for teams.

It’s with this in mind that SoheilAyari/Anthony Pons, Alex Loan/Matthieu Lecuyer and Paul Loup Chatin/Gary Hirsch shared the controls of the ORECA-FLM 09 cars entered in the LM PC class.

For the team it was also a perfect opportunity to prepare for the first meeting at Silverstone, April 12-13.


Although pure performance was not the principal goal of the tests, the drivers didn’t take long to show their speed. Experienced driver Soheil Ayari didn’t take long to confirm his status as team leader by signing the quickest time of the first day, Tuesday.

It was a nice way to start the youngster’s career in endurance, complimented by the consistent progression from LM PC rookies Anthony Pons, Alex Loan, Matthieu Lecuyer and Gary Hirsch.

« Nothing but positives» for Anthony Pons…


European Le Mans Series champion in GTE-Am last year, Anthony Pons continued his discovery of prototypes and it’s with a wide smile that he closed out the Official Test.

« It was simply excellent ! » he exclamed. « The physics are different from GT, but the sensations are so invigorating ! Because of his experience, I was happy to let Soheil find the right balance to have a car that mixed confidence with efficiency.

My feedback about the car was along the same lines as his, so that was rather positive. These tests were enriching. I want to do things the right way, with a serious approach, but also have a max of fun.

And that’s what happened. I also discovered that I have a vast potential in this discipline that I’m still learning about. There are nothing but positives to remember. »


Alongside the young driver from Andorra, Alex Loan, Matthieu Lecuyer also continued his discovery of the ORECA-FLM 09 during the first day.

Like his teammates, he benefitted from the advice given by Nicolas Minassian, Team Endurance Challenge mentor. « Nicolas is very invested and allows us to learn a lot of things quickly, » confirmed Matthieu.

« On a general scale, we completed a good session of work, which allowed us to learn more about the car, notably in terms of the setup and tire usage.

The atmosphere was good and we all got along well. Personally, my times were consistent and I’m happy with my progression. Now I’m excited to head to Silverstone to experience my first race in LM PC ! »

Confidence is the word for Gary Hirsch…


Teaming with Paul Loup Chatin, who was already alive with his experiences of the ORECA-FLM 09, Gary Hirsch also showed comfort behind the wheel. « In these sessions we were able to refine the settings of the car and to get comfortable with it. » he explains.

« I adopted a quick pace and we were able to work on long stints, as well as driver changes and other points related directly to the race.

With Paul Loup, we got along very well, being close together in terms of the driving and I think that we are a driver lineup that will gel nicely.

Our engineer is great and Nicolas Minassian is saving us a considerable amount of time with very pertinent tips. Team Endurance Challenge is a door to LM P2 and you can see that clearly. »