The BMW is extremely light on tyres compared to its Ferrari and Lamborghini class rivals...

Legendary Scottish motor racing outfit Ecurie Ecosse, along with drivers Ollie Millroy, Andrew Smith and Alasdair McCaig, picked up their third consecutive European Le Mans Series podium of the season at Austria’s Red Bull Ring on Saturday (July 20) to maintain their lead in both the Teams’ and Drivers’ championships. 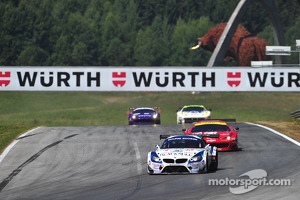 The squad’s Barwell Motorsport-run BMW Z4 GT3 enjoyed its last competitive outing at Snetterton for rounds five and six of the British GT Championship with drivers Oliver Bryant and Marco Attard two weeks ago. But with focus now switched back to its ELMS programme, the Austrian event was an opportunity to score more valuable GTC class points.

Having never driven at the Red Bull Ring before, Friday’s pair of one-hour official practice sessions were spent learning the circuit and evaluating car set-ups that would suit the technical nature of this famous track.

Championship regulations dictate that the 2013 specification BMW Z4 GT3 must carry 70kg of ballast on top of its standard minimum weight. That, as well as the car’s comparatively low torque and subsequent lack of straight-line speed relative to its rivals, meant the team would have to employ everything in its armoury to ensure a competitive run at the Series’ third round.

Having made some minor set-up changes following free practice on Friday, Millroy – the team’s ‘Pro’ driver – would remain aboard throughout Saturday morning’s 20-minute qualifying session. The BMW is extremely light on tyres compared to its Ferrari and Lamborghini class rivals, making them last longer over a race distance but difficult to bring up to optimum operating temperature during such a short qualifying run. Even so, Ollie’s fastest lap was still good enough for fourth on the grid and just a second shy of pole.

Smith was behind the wheel for the start of Saturday afternoon’s three-hour race and immediately made forward progress, passing some of the faster GTE cars while maintaining position in GTC. After 50 minutes it was the turn of McCaig who, after benefitting from a faultless fuel-only stop by his Barwell Motorsport crew, went on to complete a further 50-minute stint and retain fourth.

With 80 minutes left on the clock Millroy climbed aboard, with the BMW this time taking on fresh rubber as well as fuel. After an ultra-consistent run he pitted again for further fuel before heading back out with half an hour remaining. Incredibly, despite suffering from fading brakes, he was able to catch and pass the third placed Ferrari to help maintain Ecurie Ecosse’s 100% podium record this season.

More importantly than the string of rostrums however is that Ecurie Ecosse left Austria on Saturday evening delighted to still be leading both the Drivers’ and Team’s championships ahead of the next ELMS round at the Hungaroring in Hungary on September 14.

Ollie Millroy, Ecurie Ecosse: “We had to work extremely hard for this podium and the whole team did a fantastic job throughout the weekend to ensure we maintained our lead in the championship. I gave everything I had during my 80-minute stint which, combined with a great strategy call from the Ecurie Ecosse and Barwell team, meant I was able to move into the final podium spot.”

Andrew Smith, Ecurie Ecosse: “The Red Bull Ring is a great track and, as always, it was a privilege to race our BMW there at such a high level. The aim was to maintain our championship lead and we achieved that, but the GTC class is getting much more competitive now and with our power-to-weight disadvantage, as well as very few other teams running Bronze drivers, we are going to have to work extremely hard to maintain our lead.”

Alasdair McCaig, Ecurie Ecosse: “Third was a fantastic result for the team this weekend. We did not have the pace of the Ferraris given our weight penalty, so it was impossible to challenge the front-runners. We are hoping that this will be adjusted for the next round at the Hungaroring where we will look to safeguard our championship lead. Once again all three Ecosse drivers put in faultless, trouble-free stints and benefited from a perfect strategy from our Barwell race engineer Adam Hardy.”

Mark Lemmer, Barwell Motorsport Team Principal: “We are really suffering with the extra ballast we have to carry above the car's standard weight. It's really hurting our pace but despite this everyone remained focused and we’ve come away from Austria still just ahead in the points!”

Ecurie Ecosse’s next competitive outing sees the team head to Brands Hatch for round seven of the British GT Championship (August 11).

Strong field for Hungary round of ELMS