Sébastien Bourdais and Simon Pagenaud combined performance, consistency and reliability to guide their Peugeot 908 no.7 to victory in the 6 Hours of Silverstone, after yet another sensationally fast race. This third race win of the season for Team Peugeot Total, combined with the eighth place claimed by Franck Montagny and Stéphane Sarrazin (Peugeot no.8) takes Peugeot one step closer to a second consecutive Manufacturers’ title.

Third win for the Peugeot 908

Once again, both our cars made it to the finish and we scored two more points than our main rival.

Peugeot controlled proceedings at Silverstone, taking a third race win in ILMC after having secured a third pole position of the season, demonstrating once again the performance level of the Peugeot 908s. On such a quick track and with 48 competitors racing, it was essential to avoid the slightest incident in order to ensure both cars made it to the end of the race, Team Peugeot Total’s first goal. Unfortunately, at the start of the race, the Peugeot no.8’s hopes of victory faded when Franck Montagny clashed with a backmarker. He had to come into the pits to change the upper front left wishbone and the splitter. The team reacted quickly and the stop only cost nine laps. From that point, Montagny and Sarrazin’s race turned into a long fight to make up ground, which eventually saw them finish eighth.

Sébastien Bourdais and Simon Pagenaud refused to be intimidated by their direct rival. Without making the slightest error, the two men only pitted to change tyres and fill up with fuel. Reliable and quick, Bourdais and Pagenaud won in style at the end of a six-hour sprint.

“It’s a great win”, analysed Olivier Quesnel, Peugeot Sport Director. “Once again, both our cars made it to the finish and we scored two more points than our main rival. I note that Peugeot won at Sebring then at Spa-Francorchamps, finished 2nd, 3rd and 4th at the 24 Hours of Le Mans, achieved a one-two at Imola and then also won here, at Silverstone. We need to finish well at Road Atlanta and then at Zhuhai, but this has been a great season with a new car which has finished every race since its competitive debut.”

An incident-packed first hour of racing

Starting from pole position, Sébastien Bourdais led the 48-strong field at the start. The Peugeot 7 took the first corner ahead of Allan McNisch (Audi 2), Franck Montagny (Peugeot 8) and Timo Bernhard (Audi 1). The four drivers lapped at a similar pace and caught up with the first of the backmarkers after ten minutes of the race. It was at this point that Allan McNisch made his first attack and grabbed the lead. Only Sébastien Bourdais managed to stay with him, ready to grab the slightest opportunity. The sprint was already underway, but at 11.52 Franck Montagny clashed with another car and ran off into a tyre wall, ending up in the gravel. The Peugeot no.8 driver managed to get back to the pits, but repairs cost the car nine laps. 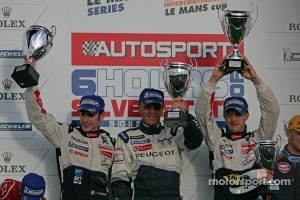 Once in front, Sébastien Bourdais gradually extended his lead. When he next handed over to his team-mate, Simon Pagenaud, the Peugeot no.7 had a 37-second lead over its nearest rival, which came in to the pits to refuel at the same time. “The start of the race was closer to a sprint than an endurance race” analysed Sébastien Bourdais. “There was some oil on the track at the start, so it was quite tricky and I was almost relieved when McNisch went past me! He eased off a little and I took advantage. After the safety car period, I had a tussle with Timo Bernhard. We attacked each other on several occasions, depending on the traffic. It was an incident-packed stint!”

Simon Pagenaud continued where his team-mate left off, but Anthony Davidson’s replacement lost a little ground to his main rival. At the mid-way point, the positions changed when Simon Pagenaud conceded first place. Further back, Stéphane Sarrazin (15th) was now driving the number 8 car and continuing to move up through the field.

At 2.56pm, the two leaders pitted once again at the same time and the Audi 1 came back out with roughly a five-second lead over the Peugeot no.7, driven by Sébastien Bourdais. The length of the stints is same for the leaders: 26 laps. The outcome of the battle remained unclear until 3.46pm when the Audi 1 was pushed into its pit garage for repairs. With 1hr 45min to go, the Peugeot number 7 led the race, some 1’31’’ ahead of the Audi 1.

A clear-cut end of race

Sébastien Bourdais, credited with the fastest race lap, and Simon Pagenaud adopted a consistent pace and pursued an effective strategy to the end, managing to avoid any pitfalls. Simon Pagenaud finished off the job perfectly to give the Peugeot 908 its third race win of the season, after Spa-Francorchamps and Imola

The end of the Peugeot no.8’s race also went very well. Stéphane Sarrazin and Franck Montagny took it in turns to maintain a good pace, enabling them to get back up to 8th place overall, which earned Peugeot some important points for the Manufacturers’ standings.

The next round will be held at the Road Atlanta racetrack (Georgia – USA). There will be three Peugeot taking part in this sixth and penultimate round of the ILMC. The two factory Peugeot 908 driver pairings will be made up of:
No.7: Anthony Davidson – Sébastien Bourdais – Simon Pagenaud
No.8: Franck Montagny – Stéphane Sarrazin – Alexander Wurz

Bruno Famin, Peugeot Sport’s Technical Director: "The opposition was intense at the start of the race, but we were expecting that. The racing incidents were significant, which is not surprising when the battle is so intense. This win owes a lot to the work done in private testing this summer, especially the work we did with Michelin. Apart from the warm-up, we have topped all three practice sessions this weekend. We had a very competitive car, of which our drivers have made very good use. The race was close, there was little to choose between the leading cars. We have extended our lead in the championship, so we have achieved our goal.”

Sébastien Bourdais, Peugeot 908 no.7: “This the second race win in which I have been involved this season, after the win in Imola. We had a great race, but it was difficult and very hotly contested. We had to really go for it! We didn't make the slightest error, whereas our rivals made a mistake. It’s a team win, because we have all worked together for this. I pushed when I needed to push, and Simon did his job superbly.”

Simon Pagenaud, Peugeot 908 no.7: “It's a perfect weekend for Peugeot and us, with a pole position and a race win. We have met all our goals. A few days ago, I wasn’t sure if I would be racing here or not, so it’s special feeling, especially as I hadn’t raced at this track before. I spare a thought for Anthony Davidson, because this is his race. He has been here all weekend to offer me advice. This win is down to the entire team and all of our partners. The drivers are the last link in the chain, we have to finish off the job, which is what we have done today.” 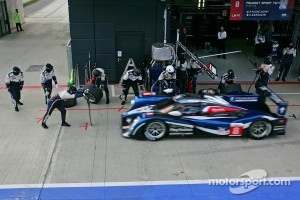 Stéphane Sarrazin, Peugeot 908 no.8: “After the incident at the start, we pushed hard to make up ground and rack up as many points as possible. Once again, the Peugeot 908 has shown what a competitive car it is. Peugeot has won, simply by being quicker, so the overall result is positive.”

Franck Montagny, Peugeot 908 no.8: "Peugeot has won, and that's the important thing to remember. The clash that I had with a Formula Le Mans could have had more serious consequences, but the team managed to repair the damage very quickly. We then pushed to make up ground, whilst maintaining a good pace.”