Intrepid American duo getting to grips with Hungaroring

Gunnar Jeannette and Frankie Montecalvo ended their first day at the Hungaroring on a high note.

Ram Racing’s intrepid American driving duo, Gunnar Jeannette and Frankie Montecalvo, took more than a passing interest in the recent Hungarian Grand Prix. They knew that, barely a month past the visit of the F1 circus, they would be once again crossing the Atlantic for the fourth round of the European Le Mans Series – the 3 Hours of Hungaroring on Saturday, 14th September. 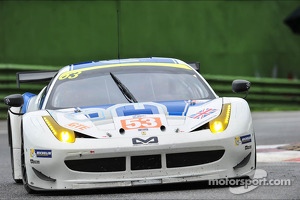 While nothing replaces first-hand driving experience, much can be gained from watching the way a track twists and turns, especially when seen from a driver’s eye.

Utah-based, former wing-suit, BASE jumper Jeannette and New Jersey hot-shot Montecalvo, took the opportunity to take a scooter around the track earlier this week to examine the layout, kerbs, bumps and track surface of the undulating 4.381 km (2.7 mile) circuit. The driving partners, who are currently sitting in second place in the LMGTE Drivers’ points classification behind their Ram Racing team mates, were keen to get their No.53 Ferrari 459 Italia out on track. Today’s two one-hour practice sessions gave them that chance.

Frankie Montecalvo: “The Ram Racing guys are just great. They’ve made some changes to the car so I don’t have to use a seat insert anymore, and little improvements like that will make for quicker pit stops…they never stop thinking of stuff to do.

“It’s going good on the track as well, learning another new track, a little bit every session, and catching up with those guys who’ve been here before. We’re trying to figure out the set up and learn the track all in one so it’s been a little difficult compared to some other tracks, but we’re catching up and getting better each time - we were p2 in the second session.

“My first impressions of the Hungaroring are that it’s a cool track but tricky and technical in some sections because it’s tight, twisty and difficult to pass. It’s fun to drive though!”

Gunnar Jeannette: “We’re here in Hungary, and today was the first time out on the circuit for me and Frankie. We’re going pretty well, learning and improving lap by lap.

“Every time I watch an F1 race, year-on-year, I hear how hot it is and right now it’s about 52F or 10C – not very warm and it rained a little bit as well today. We’re not really sure what to do with the set up at this point, as recently we’ve been in hot places, so I think it’s going to be a little bit of a roll of the dice in qualifying.

“We ended up p2 in the last session though so things aren’t too terrible but we’ll see what we can do tomorrow for qualifying and the race.”

On a circuit where overtaking is notoriously difficult, tomorrow morning’s qualifying session will be important but not essential to success. Saturday’s weather forecast is for rain for much of the day which means that whichever way the dice fall, it could be a crapshoot for everyone.

Qualifying takes place at 09:35 (local) tomorrow morning, with the 3 Hours of the Hungaroring getting underway at 16:01.

Jota on top in Hungary on Friday