Champion in 2009 with Aston Martin Racing, the Czech driver brings his experience of the series.

Jan Charouz, 26, will race for Sébastien Loeb Racing in 2014. He will share driving duties with Vincent Capillaire behind the wheel of the No. 24 ORECA 03 entered in the European Le Mans Series. Champion in 2009 with Aston Martin Racing, the Czech driver brings his experience of the series. René Rast will join these two in the official ELMS test on Tuesday and Wednesday.

Jan Charouz: “ We will be in contention for good results! “ At 26 years of age, Jan Charouz already has an extensive resumé. Three years after his debut in Formula BMW, he won the F3000 International Masters. He then turned to endurance racing, notably with two top five finishes at the 24 Hours of Le Mans and championship title in the Le Mans Series in 2009 with the official Aston Martin Racing team. The following year, he finished second in the LM P2 class, while also competing in the first of two World Series by Renault seasons. Following a stint as test and reserve driver for Lotus Renault GP in F1 for two years, Charouz returned to endurance racing in 2012, with a victory in the World Endurance Championship in the LM P2 class. 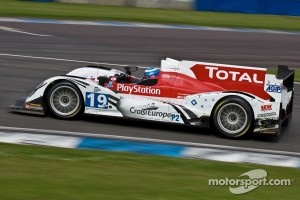 “ I’m very happy to be joining Sébastien Loeb Racing “ admits Jan. “ After a complicated year, I was looking forward to better in 2014. I’ve already driven the ORECA 03, which is probably the best LM P2 available right now. The team is also up to par and very motivated. With this package, we will be in contention for good results. Winning is always the goal, even if we know the competition will be strong in LM P2. So far the tests have gone well. The car is handling well and Vincent Capillaire and I get along well. The first feelings are positive, inasmuch as I already know some people within the team, such as Sébastien Loeb, Léo Thomas (technical director) as well as Franck Tiné (sporting director). “

Franck Tiné: “ Jan’s qualities correspond to our objectives… “ In European Le Mans Series, Jan Charouz will team with Vincent Capillaire, who is supported by the SO24! project, and a third driver who will be named at a later date. For their return to LM P2, the Alsatian team will be ambitious. “ With our technical staff, led by Léo Thomas, the Michelin tires and the ORECA 03, we have goal set high “ confirms Franck Tiné, sporting director. “ Jan’s qualities correspond to our objectives. With his experience, his collaborations with factory teams and notably his championship title, his contributions will be important. Since his first laps with the team, he has confirmed his professionalism and his involvement. We are happy with his approach, his integration into the team and his collaboration with Vincent, who is progressing rapidly and who understands the car’s behavior well. Jan’s arrival also fits perfectly with the international direction the team is taking. “

Entered in LM P2, Sébastien Loeb Racing will also race in GTC with an Audi R8 LMS ultra driven by Henry Hassid, Mike Parisy and a third driver to be named.